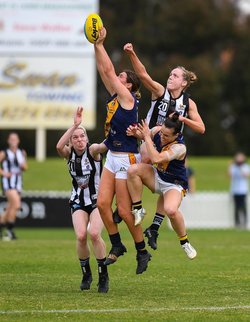 IT shapes as a fascinating Round 13 in the WAFL Women's competition highlighted by Sunday's battle that sees East Fremantle try to claim top position and Swan Districts attempting to breaking into second.

With the top-of-the-table Subiaco having the bye in Round 13 of the 2019 Optus WAFLW Premiership Season, the other four teams in the competition lock horns and there are no guarantees the Lions are still on top of the ladder come the end of the weekend's action.

The round gets underway on Saturday afternoon at Mandurah's David Grays Arena with Peel Thunder hosting Claremont. The game will be shown via livestream as well from 4.30pm and will be available from the WAFL Facebook page and website.

Then on Sunday afternoon at East Fremantle's New Choice Homes Park, it looms as one of the most crucial games of the season with East Fremantle hosting Swan Districts from 2pm.

Round 13 in the WAFLW competition gets underway on Saturday afternoon in Mandurah with Peel taking on Claremont at David Grays Arena.

Peel is fresh off the bye in Round 12 and just looking for a way to be competitive again while it's an important game for Claremont to stay in touch with the top three games with them potentially improving to third position with a win as well.

Prior to last week's bye, the Thunder had been struggling kicking a total of four goals in their past four matches to be anchored to the bottom of the ladder with one win from nine matches so far in 2019.

Claremont is also coming off a disappointing loss to Swan Districts last week by 52 points where the Tigers only managed to kick the one goal.

But Claremont still  holds a 5-4 record and despite having a low percentage, could still rise up the ladder with a win on Saturday.

Peel and Claremont have already met twice so far this season with Round 3 producing a tight and entertaining affair with the Tigers prevailing by three points at Claremont Oval.

But Peel managed just the one behind against Claremont in Round 8 at David Grays Arena with the Tigers managing to win by 29 points.

Then on Sunday afternoon at New Choice Homes Park, it should be a tremendous and potentially season-defining contest between East Fremantle and Swan Districts.

East Fremantle comes into the game on home soil sitting in second position on the WAFLW ladder with a 6-4 record and also the best percentage in the competition.

That means that a win on Sunday for the Sharks against Swans and with Subiaco having the bye that they will move into top position on the ladder.

Meanwhile for Swan Districts, the black-and-whites are coming off a dominant 52-point victory against Claremont following two tight and close affairs with Subiaco over the previous month.

Ebony Antonio and Gemma Houghton were two significant additions for Swan Districts last week as they improved to a 5-5 record on the season to sit in third position on the ladder.

Now a win on Sunday afternoon against East Fremantle and Swans will remain in third position on the ladder due to percentage but they will join the Sharks on six wins and remain only a game shy of Subiaco leaving a top two finish well and truly possible.

East Fremantle and Swan Districts have already played one another twice this season with the first meeting coming in Round 3 at New Choice Homes Park as well. On that occasion, it was Swan Districts who had a day to forget kicking just the one goal with East Fremantle winning by 67 points.

Then in Round 8 also at East Fremantle, it was a much tighter affair and on that occasion the Sharks did again prevail to the tune of eight of eight points against the black-and-whites.