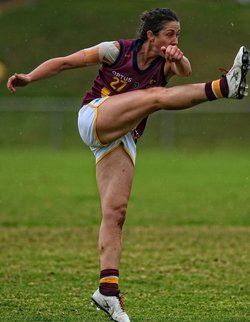 SUBIACO has confirmed itself as the team to beat in the Optus WAFLW Premiership Season for 2019 with a 20-point victory over East Fremantle on Saturday with Swan Districts keeping things interesting with a win against Claremont.

The opening seven rounds of the inaugural WAFLW season have certainly shown that the new-look competition was the right idea with talent condensed into the five league teams and creating some high-quality football that will have plenty of the players ready for another AFLW campaign in 2020.

It's also ended up producing plenty of competitive match ups and from the league-leading Subiaco to the bottom placed Peel Thunder, there is a feeling that any team can beat any other on their day which is exactly what you want in any competition.

Round 7 in the WAFLW got underway on Saturday afternoon at East Fremantle's New Choice Homes Park with Subiaco proving too strong, beating East Fremantle 5.6 (36) to 2.4 (16).

Swan Districts then hit the road on Sunday afternoon and produced an impressive performance at Claremont Oval to defeat Claremont 6.5 (41) to 4.3 (27).

East Fremantle and Subiaco played off in the Grand Final at league level in the final WA Women's Football League season last year and they met again on Saturday at New Choice Homes Park with plenty on the line.

The Sharks and Lions had already met once this season back in Round 2 at Leederville Oval and that was a tight affair with Subiaco just managing to prevail by 11 points.

Then coming into Saturday's game at East Fremantle's home venue, the Lions were looking to further consolidate top position on the WAFLW ladder while the Sharks were looking for a third victory and to stay in touch of that second position.

So the stage was set for a fascinating contest in tough weather on Saturday afternoon with the rain at its heaviest following the WAFL league clash between East Fremantle and the West Coast Eagles.

It was slow going with the torrential rain in the first quarter and there was just the one goal scored which went the way of Subiaco with the Lions having the only four scoring shots to lead by nine points at quarter-time.

Subiaco then added two more goals in the second term to extend their lead by half-time to 16 points despite East Fremantle getting on the board with its only goal of the first half.

The Sharks then managed just the one behind in the third quarter with the Lions kicking a goal to open up a 21-point lead by three quarter-time.

The win improves Subiaco to a 5-1 record on the season to be two games clear on top of the WAFLW ladder after seven rounds.

East Fremantle remains in fourth position with a 2-3 record but the second best percentage in the competition.

Renee Forth kicked two goals for Subiaco with Beatrice Devlyn, Hayley Miller and Tarnee Tester all adding one apiece.

Lara Filocamo, Miller, Kristen Jayasuriya, Claire Ortiepp and Leah Mascall were all about Subiaco's best performers in the win.

Claremont and Swan Districts locked horns in what always shaped to be a terrific WAFLW contest on Sunday afternoon at Claremont and in the end it was Swans prevailing to improve to second position on the ladder.

The game was the live streamed Round 7 contest in WAFLW held on Sunday afternoon at Claremont Oval and coming into it Claremont was looking for a fourth win of the season to remain clear in second position while Swan Districts was hunting its third win for 2019 in six games.

The conditions for the teams to play in were significantly better than what greeted East Fremantle and Subiaco on Saturday afternoon at East Fremantle Oval, and the contest was a high quality one between two teams looking to make a statement of what they are capable in this inaugural WAFLW season.

Claremont came into the contest with a 3-2 record having started the season with the Round 1 bye before a hefty loss to Swan Districts by 36 points in Round 2 at Steel Blue Oval.

Following on from that, Claremont beat Peel by three points, Subiaco by seven points, East Fremantle by a point and then a defeat to the Lions by 50 points coming into Sunday's game against Swans.

Meanwhile for Swan Districts, the black-and-whites opened the WAFLW campaign losing to Subiaco in Round 1 before beating Claremont, losing to East Fremantle, thrashing Peel Thunder and then suffering a big loss against Peel leading into Sunday's game against the Tigers.

The game got off to a tight start with just the one goal apiece in the opening quarter and that saw Swan Districts take a narrow one-point advantage into the quarter-time break.

Swans managed to kick two more goals in the second quarter and the Tigers only kicked the one which meant Swan Districts went into half-time with a seven-point lead.

It was another two goals the way of Swan Districts in the third quarter too and with Claremont managing just the one major, Swans' lead had grown to 14 points by three quarter-time.

The result improves Swan Districts to second position on the WAFLW ladder with a 3-3 record.

Claremont is also on a 3-3 record but in third position significant percentage behind that of Swan Districts.

Kellie Gibson delivered a starring performance for Swan Districts kicking three of her team's six goals in the victory.

Mikayla Hyde, Bianca Webb and Gemma Houghton were the other goal kickers for the black-and-whites.