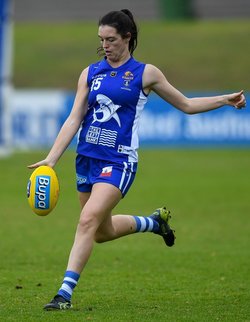 WITH the league-leading Subiaco having the bye, it was a chance for the other four teams to sort themselves out in the WAFL Women's competition and it ended up providing a tight East Fremantle win and big win for Claremont in Round 8.

Round 8 of the inaugural WAFLW Optus Premiership Season took place with both games taking place on Sunday afternoon with the league's runaway leading team, Subiaco, having the bye after winning of their opening six matches in 2019.

Both games on Sunday afternoon were then always going to be fascinating and that's how it played out with East Fremantle narrowly defeating Swan Districts 5.7 (37) to 4.5 (29) at East Fremantle's New Choices Homes Park.

The other match wasn’t quite as close with Claremont proving too strong for Peel Thunder, winning 4.6 (30) to 0.1 (1) at Mandurah's David Grays Arena.

Following eight rounds of the 2019 WAFLW season, Subiaco remains clear on top of the ladder with a 5-1 record and by far the best percentage in the competition.

Claremont is now a game clear in second position with a 4-3 record while East Fremantle (3-3) is third, Swan Districts (3-4) fourth and Peel Thunder (1-5) fifth.

Round 9 this weekend will see both matches take place on Saturday starting at 10am at David Grays Arena with Peel Thunder hosting East Fremantle. Then at 12.05pm, Swan Districts faces Subiaco at Steel Blue Oval.

East Fremantle and Swan Districts have long been two of the powerhouse teams in female football in WA so any time they meet it's going to be a tremendous, and Sunday at New Choice Homes Park was no exception.

With East Fremantle coming into the game looking for a third win of the season and a chance of moving into second position and Swan Districts looking for a fourth win and to maintain that second spot, there was plenty at stake heading into the contest at Shark Park as well.

The Sharks were coming off a loss to the league-leading Subiaco by 20 points last week coming off a bye and also a one-point loss to Claremont so they were looking for their first win of the WAFLW season since their 61-point thrashing of Swan Districts back in Round 3.

Sunday's clash was always going to be significantly closer than that East Fremantle win earlier in the season with Swans having beaten Peel Thunder twice since then along with defeating Claremont so the black-and-whites entering the trip to East Fremantle Oval on a three-game winning run.

Swan Districts continued its momentum from its recent winning form kicking two goals to one in the opening term with three scoring shots to just one from East Fremantle to lead by seven points at quarter-time.

East Fremantle worked on top in the second quarter, though, holding Swan Districts to just the one behind while kicking 2.4 themselves to open up an eight-point lead by the half-time interval.

The Sharks continued to lock Swans down in the third term restricting them to just the two behinds while kicking the long goal themselves to take a 12-point lead into three quarter-time.

Swan Districts weren’t going away, though, and kicked two goals to one in the last term to make things interesting, but East Fremantle held on to win 5.7 (37) to 4.5 (29).

Ashlee Atkins, Ann McMahon, Ashton Hill, Evangeline Gooch, Sprylan and O'Donnell were all among the Sharks' best performers in the victory.

Claremont improved to second position on the WAFLW ladder after eight rounds of the 2019 season following a 29-point win over Peel Thunder where they kicked the only four goals of the contest.

Claremont were looking to bounce back from their 14-point loss to Swan Districts last week while the Thunder were going to be no pushovers despite having won one of their five games coming into Sunday's clash at Mandurah's David Grays Arena.

Peel had the bye last week but prior that produced their best showing of the season beating Swan Districts by seven goals. Considering the Tigers lost a week later to Swans, it set the stage for a fascinating battle in Mandurah on Sunday.

But Claremont started impressively kicking two goals in the opening quarter while restricting Peel to just the one behind. As it turned out, that was enough to set up the eventual victory.

The Thunder wouldn’t manage another single behind the rest of the afternoon on their home ground while Claremont kicked their third goal in the second term, and their fourth in the last quarter while kicking another five behinds along the way.

Bella Lewis, Adele Arnup, Emily Bonser and Parris Laurie all kicked a goal apiece for Claremont in the 29-point win.

Despite not kicking a goal, Peel had some strong performers on the day including Abby Barnden, Courtney Rowley, Greta McKinley, Kate Bartlett and Cassie Davidson.