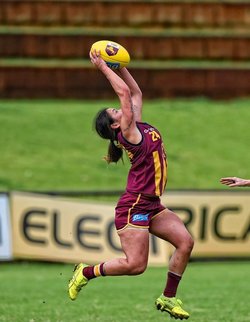 PEEL Thunder recorded its first ever win in the WAFL Women's competition in style on Saturday against Swan Districts while Subiaco also confirmed itself as the team to beat in 2019 with a big win over Claremont.

The 2019 Optus WAFLW Premiership Season resumed action on the weekend for Round 6 of the competition following the general bye.

Things got underway on Saturday afternoon at Bassendean's Steel Blue Oval with Peel Thunder opening its account for the season. They did in style too with the 8.5 (53) to 1.5 (11) victory against Swan Districts.

The second game of Round 6 took place on Sunday afternoon at Leederville Oval and it was a top-of-the-table clash between Subiaco and Claremont. It was the Lions who proved too strong, beating the Tigers 8.6 (54) to 0.4 (4).

It was two emphatic performances by Peel and Subiaco across the weekend with the winners outscoring their vanquished foes 16 goals to one while East Fremantle sat out with the bye.

Following the first six rounds in the inaugural WAFLW season, it's Subiaco who sits out on top of the ladder with a 4-1 record.

Round 7 in the WAFLW competition sees East Fremantle host Subiaco on Saturday afternoon and then Claremont take on Swan Districts on Sunday while Peel takes the bye on the back of its breakthrough win.

Round 6 in the WAFLW competition got underway on Saturday afternoon with Swan Districts hosting Peel Thunder at Steel Blue Oval.

It was the first game in three weeks for Swans' women after they had the bye in Round 5 and then with the general bye last week.

In their last game three weeks ago, Swans were impressive beating the Thunder by 46 points also at Steel Blue Oval which improved the black-and-whites to a 2-2 record on the season.

Swans had beaten Claremont and Peel while suffering defeats at the hands of Subiaco and East Fremantle.

Peel, meanwhile, came into Saturday's clash at Steel Blue Oval on the back of losing their opening four WAFLW matches to East Fremantle, Claremont, Swan Districts and Subiaco.

So the Thunder came to the Bassendean venue on Saturday hunting their first win of 2019 and they ended up taking advantage of a Swan Districts team that did look like it hadn’t played a game in three weeks.

Peel made a dominant start with three goals to nil in the opening quarter to lead by 19 points at quarter-time after making the most of the handy breeze advantage.

Swan Districts did kick its lone goal in the second term but Peel did add another goal themselves to head into the half-time break with a 17-point advantage.

Peel then held Swans scoreless again in the third quarter as they enjoyed the breeze at their backs again. The Thunder managed to kick another two goals to head into the last change with a 32-point lead.

Peel went on to kick the only two goals of the final stanza as well to end up beating Swan Districts by 42 points.

Bartlett, Ebony Dowson, Katie Jayne Greive, Molloy and Phillips were all among the standout players in the win for Peel as well.

Shanae Davison was the lone goal scorer for Swan Districts.

Aimee Ralph, Angelique Stannett, Sarah Condipodero and Kellie Gibson were among the strongest performers on the afternoon for the black-and-whites.

It was a top-of-the-table clash in the WAFLW competition on Sunday at Leederville Oval but by the end of the day it was Subiaco who had stamped itself as the team to beat in 2019 with a 50-point victory against Claremont.

Subiaco and Claremont both came into the contest with 3-1 records so the stage was set for a tremendous Round 6 battle.

The Lions opened their season with wins against Swan Districts and East Fremantle before then losing the first meeting with the Tigers for 2019 in Round 4 at Claremont Oval by four points.

Subiaco then responded with a 51-point win against Peel but the Lions came into Sunday's clash looking for a measure of revenge on the Tigers for that earlier defeat.

It was a tight opening with just the three scoring shots combined between the two teams in the opening quarter with Subiaco managing the only goal to take a six-point lead into quarter-time.

Subiaco then opened up a game-winning advantage by half-time having kicked three goals in the second quarter to just two behinds from Claremont to see the Lions take a 24-point lead by the main break.

It was just a behind apiece in the third quarter before Subiaco dominated the last term with four goals to no score from Claremont as the Tigers went on to win 8.6 (54) to 0.4 (4).

Tarnee Tester kicked another three goals for Subiaco to remain the best forward so far this season in the WAFLW competition.