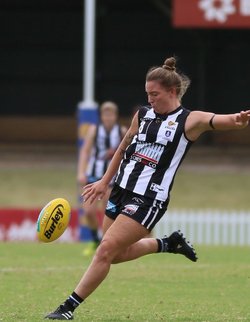 THINGS really tightened up in the inaugural WAFL Women's Optus Premiership Season on Saturday with Claremont and Swan Districts winning impressively to join Subiaco and East Fremantle on two victories so far in 2019.

Both Round 4 matches in the 2019 Optus WAFLW Premiership Season took place on Saturday for the first time this campaign with each match playing as the lead-in to the WAFL contest at the corresponding venue.

That saw the action begin on Saturday morning at Claremont Oval and it was Claremont recording its second win of the season, and handing Subiaco its first defeat, with the Tigers prevailing 5.1 (31) to 3.6 (24).

The second match of the round then took place at Bassendean's Steel Blue Oval and Swan Districts produced an impressive display to come away with an 11.5 (71) to 4.1 (25) victory against Peel Thunder.

The Round 4 results leave the competition incredibly close into the inaugural season of the new WAFLW competition with four of the five teams all having recorded two victories to date.

Following four rounds of the 2019 season, East Fremantle sits on top of the ladder with a 2-1 record but only percentage ahead of Subiaco (2-1), Swan Districts (2-2) and Claremont (2-1). Peel Thunder is yet to win in three appearances to date.

Round 5 in the WAFLW sees both matches take place on Sunday beginning with Peel Thunder facing Subiaco from 9.15am at Mandurah's David Grays Arena.

The second match of Round 5 takes place on Sunday afternoon from 3.45pm with Claremont playing East Fremantle at Claremont Oval.

It was a significant challenge ahead of Claremont on Saturday morning to open Round 4 in the WAFLW season but the Tigers responded well to beat Subiaco by seven points at Claremont Oval.

Claremont was at home to Subiaco on Saturday morning and it was a big test for the Tigers against a Lions team fresh off the bye and who had won their opening two matches impressively against Swan Districts and East Fremantle.

Claremont had gone 1-1 over its first two games as well with a loss to Swan Districts and then win over Peel Thunder so the stage was set for a fascinating contest at Tigerland on Saturday morning.

The Tigers came out and kicked the only goal of the first quarter and then after both teams kicked a goal apiece in the second term, Claremont went into the half-time interval with a three-point advantage.

It was another two goals apiece in the third quarter to see Claremont still leading by four points at three quarter-time but the game was well and truly up for grabs.

Claremont was able to kick the only goal of the final term to end up beating Subiaco 5.1 (31) to 3.6 (24) for their second win of the season and handing the Lions their first defeat.

It was a tremendous WAFLW debut for Bonser. She has joined Claremont from Swan Districts this season and been named vice-captain of the Tigers having returned last year from a knee reconstruction on each knee back in 2016 after being drafted into AFLW by the Fremantle Dockers.

Bonser was one of the best afield for the Tigers along with Spanos, Brooke Hongell, Ella Smith and Jacinta Valentini.

Abbey Dowrick, Tarnee Tester and Lindal Rohde were the goal scorers for Subiaco.

Tester, Danika Pisconeri and Rohde were also among the best performers for the game with the Lions.

Swans had lost to East Fremantle at New Choice Homes Park the previous Sunday by 61 points in a game where they kicked just the one goal and had two scoring shots.

But it was an impressive response from the Black Ducks against Peel on home soil on Saturday afternoon with the game played as a lead in to the WAFL fixture between Swan Districts and the West Coast Eagles.

It was a high-scoring opening to the contest as well with seven goals and 12 scoring shots between the two teams.

But it was Swan Districts who worked on top with nine of those scoring shots for four goals to see the home team take an 11-point advantage into the quarter-time break.

Things remained steady in the second quarter and the black-and-whites maintained an 11-point lead at half-time over the Thunder.

The action opened up again in the third term with Swan Districts managing to pile on five goals to just one from Peel to see the Black Ducks lead by a match-winning 34 points at three quarter-time.

Shanae Davison and Bronwyn Hansen also kicked three goals each for the game for the Black Ducks with a goal apiece to Mikayla Hyde and Shannon Matthews.

Imahara Cameron, Davison, Hansen, Nyra Anderson and Sharp were all tremendous for Swan Districts in the big win.

Sonia Dorizzi kicked two goals for Peel with Tayla Bresland and Kate Bartlett booting one each.

Shannon Whale, Bartlett, Courtney Rowley, Demi Liddle and Abby Barnden were among the better performers for the day for Peel.