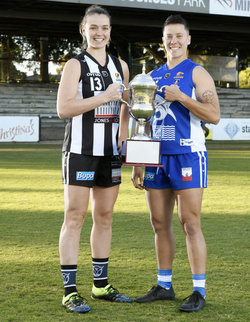 The inaugural Optus WAFL Women’s Grand Final will be played between East Fremantle and Swan Districts at 2.35pm this Saturday, September 14 at Mineral Resources Park, Lathlain.

East Fremantle progressed straight to the Grand Final after defeating Subiaco in the Second Semi Final a fortnight ago and have the chance to defend their League Premiership in last year’s WA Women’s Football League competition.

Swan Districts claimed a convincing 45-point win over Subiaco in the Preliminary Final last Saturday to secure their place in the Grand Final, setting the scene for an exciting contest between the two in-form teams of the competition.

Thanks to WAFLW naming rights partner Optus, the inaugural 2019 Optus WAFLW Premiers will receive a $10,000 grant to put towards player development, equipment and facilities to help them prepare for an even bigger Optus WAFLW Premiership season in 2020.

“It has been a wonderful season and Optus is pleased to play its part in helping female athletes play this great game. We congratulate every player for their commitment and dedication, and look forward to doing it all again in season 2020,” said Melissa Hopkins, Optus’ Head of Marketing.