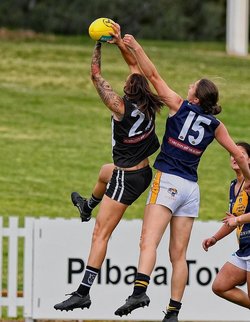 EAST Fremantle is straight through to the inaugural WAFL Women's Grand Final after winning Sunday's second semi-final against Subiaco while Swan Districts kept its season alive at the expense of Claremont.

The first ever season of the Optus WAFLW competition saw precious little separating the top four teams and each of those ended up qualifying for the inaugural finals series with only Peel Thunder missing out on competing.

Both semi-final contests took place on Sunday afternoon with one team to advance to the Grand Final while two others would move into a preliminary final and another would end up eliminated.

It was Swans who proved too strong beating the Tigers 7.6 (48) to 1.1 (7) and advance to next Saturday preliminary final while the season for Claremont comes to a close.

The second semi-final then took place at Leederville Oval between the two teams who played off for the Grand Final in last year's WAWFL competition.

It was a similar result this time around with the Sharks beating the Lions 6.6 (42) to 2.2 (14) to move straight into the Grand Final while Subiaco now hosts Swan Districts in Saturday's preliminary final to determine who will take on East Fremantle.

Meanwhile in the WAFLW reserves competition, South Fremantle defeated Claremont in the second semi-final at Steel Blue Oval to move straight into the Grand Final for 2019.

And in the Youth Girls Rogers Cup competition, South Fremantle also won the second semi-final on Sunday beating Peel Thunder 5.4 (34) to 2.5 (17) to move into the Grand Final in two weeks' time.

Subiaco beat East Fremantle 3.9 (27) to 2.1 (13) in the first semi-final at Leederville Oval with the Sharks season now over and Lions advancing to the preliminary final against the Thunder.

Subiaco and East Fremantle did battle with a spot in the first ever WAFLW Grand Final on the line on Sunday and despite the Lions finishing on top of the ladder, it was the Sharks who prevailed and advanced to earn the week off.

Subiaco claimed the minor premiership at the conclusion of the inaugural WAFLW home and away season amassing a 9-3 record along the way and a huge percentage highlighting how well they played throughout those 12 matches.

But East Fremantle was building some impressive momentum by the end of the season as they got some key AFLW players back in their line-up.

That saw the Sharks finish the season in second position with a 7-5 record and a percentage 35 points more than that of the third placed Swan Districts.

So the stage was set for a fascinating second semi-final battle at Leederville Oval on Sunday afternoon between the two teams that played off for the WAWFL Grand Final last year.

East Fremantle continued its momentum from late in the season to start impressively on Sunday too kicking the only three goals of the opening quarter and holding Subiaco to just the one behind.

Subiaco hit back in the second term, though, and kicked the only two goals and that saw East Fremantle's lead cut back to just nine points at half-time.

It was then all the Sharks in the second half. They held the Lions to just the one behind in the last quarter and while the tough weather conditions made it difficult for scoring for them as well, East Fremantle still managed three more goals.

That saw the Sharks end up winning 6.6 (42) to 2.2 (14) to advance straight to the Grand Final on Saturday September 14 at Lathlain's Mineral Resources Park.

Subiaco now has a second chance to reach the Grand Final hosting Swan Districts in this Saturday's preliminary final at Leederville Oval.

Roxanne Roux was the star in attack for East Fremantle kicking four goals on a game where only eight were scored between the two teams. Karly Tapner and Gabby O'Sullivan kicked the other goals for the Sharks.

O'Sullivan, Samara Pluschke, Ashlee Atkins, Evie Gooch, Kimberley Bowey and Ashton Hill were also among the best players on the afternoon for the Sharks.

Aimee Schmidt and Kristen Jayasuriya were the goal scorers for Subiaco.

Bree Mahoney, Tarnica Golisano, Ashtyn Cowie and Beatrice Devlyn were the best on the day for the Lions.

Swan Districts finished the inaugural WAFLW season in third position on the ladder with a 7-5 record which meant they were only percentage off the second placed East Fremantle.

Claremont was only a game back of Swans but finished the season with almost half the percentage so Swan Districts deserved to be feeling confident heading into Sunday's first semi-final at Steel Blue Oval.

And Swans showed their quality throughout the afternoon holding the Tigers scoreless for the entire first half and to just one goal for the match.

Swans kicked just the one goal in the first quarter but then opened up a match-winning advantage in the second term by kicking four goals and going into half-time leading by 36 points with Claremont scoreless.

While Claremont did kick a goal in the third quarter in what proved to be the only score for either side as the rain came down, Swans responded in the last quarter with two more goals to end up winning 7.6 (48) to 1.1 (7).

The win sees Swan Districts now advance to this Saturday's preliminary final against Subiaco at Leederville Oval with the Lions having lost the second semi-final against East Fremantle.

The winner of this Saturday's preliminary final will play East Fremantle in the inaugural WAFLW Grand Final the following Saturday at Lathlain's Mineral Resources Park.

Gemma Houghton continued to show why she is one of the best key forwards in the country, backing up her tremendous AFLW season with the Fremantle Dockers now in the WAFLW for Swan Districts.

She kicked another two goals in the win on Sunday as did Mikayla Hyde. Mikayla Bowen, Imahra Cameron and captain Ebony Antonio also kicked goals for Swans in the eventual 41-point victory.

Among Swans' best players in what was a tremendous team performance were Kellie Gibson, Angelique Stannett, Mim Strom, Bianca Webb and Shanae Davison.

It was a tough afternoon for Claremont but Chloe Colegate kicked their lone goal in the third quarter.

Emily Bonser, Allana Dickie, Sarah Garstone, Adele Arnup and Bella Lewis were among the better performers for Claremont on the day as their season came to a close.