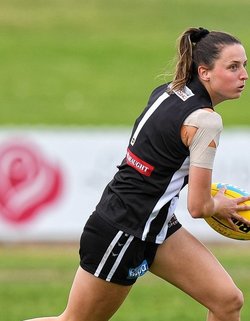 SWAN Districts has continued its tremendous late season form to storm into the WAFL Women's Grand Final against East Fremantle with an emphatic 45-point preliminary final win against Subiaco on Saturday.

Subiaco had been the standout team for much of the first ever Optus WAFLW Premiership season and did finish as minor premiers, but they lost the second semi-final to East Fremantle leaving them in a must-win situation on Saturday to keep their 2019 campaign alive.

The Lions had earned hosting rights for the preliminary final on Saturday afternoon as they took on Swans at Leederville Oval, but it was the black-and-whites who came into the game with the momentum on the back of a four-match winning streak.

It was then Swan Districts who came out with all guns blazing with the spot in the Grand Final on the line.

Swans held Subiaco to just the three behinds in the first quarter and they kicked three goals themselves to head into quarter-time with a 17-point advantage.

Things tightened up in the second quarter and Swans again locked the Lions down holding them scoreless while they kicked another goal themselves to move into the half-time interval on top to the tune of 26 points.

Subiaco's season was on the line and they had to respond in the third quarter, and the Lions did by kicking their first two goals of the preliminary final.

The only problem was Swan Districts also kicked another two majors and that saw Swans still up by 25 points at the last change.

It was going to take something remarkable from Subiaco to comeback in the last quarter and it wasn’t to happen.

Swan Districts further put their foot down kicking the only four goals of the quarter holding the Lions to just the one behind to come away with quite the impressive 9.8 (62) to 2.5 (17) victory.

The 2019 WAFLW Grand Final is now set between Swan Districts and East Fremantle and it shapes as a cracking contest between two teams in terrific form. It takes place next Saturday at Lathlain's Mineral Resources Park.

Gemma Houghton continues to show that she is one of the best key forwards in the game across the country by putting in a dominant display in attack and kicking three goals for Swan Districts.

Swans captain Ebony Antonio was tremendous all day as was Mim Strom in the ruck with Imahra Cameron, Lauren Osborne and Taylor Pescud among the other standout performers.

Hayley Miller and Tarnee Tester were the goal scorers for Subiaco while Miller, Lara Filocamo, Beatrice Devlyn and Rebecca Viney were among the best performers for the Lions.

Meanwhile in the reserves preliminary final also held on Saturday at Leederville, Claremont proved too strong for East Fremantle winning 6.8 (44) to 2.1 (13).

That means East Fremantle will take on South Fremantle in the reserves Grand Final at Mineral Resources Park on Saturday.

And then Peel Thunder ensured they will take part in two of the three Grand Finals on Saturday by beating Subiaco in the preliminary final of the Youth Girls.

The Thunder beat the Lions 4.10 (34) to 3.1 (19) to set up a Rogers Cup Grand Final contest with South Fremantle on Saturday at Mineral Resources Park.