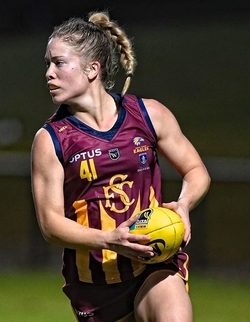 IT appears that Claremont and Subiaco are establishing themselves as the teams to beat two rounds into the 2020 Optus WAFL Women's Premiership Season with wins for the Tigers and Lions on Sunday as well as Peel Thunder.

Round 2 of the 2020 WAFLW season saw all three matches take place on Sunday afternoon with Swan Districts, Subiaco and East Fremantle attempting to back up their opening round wins, and South Fremantle, Claremont and Peel Thunder desperate to open their accounts.

That set the stage for the three tantalising encounters starting at Fremantle Community Bank Oval. Unfortunately for South Fremantle, they couldn’t manage to score for the second straight week to start their life in the WAFLW competition, with Peel Thunder winning 9.10 (64) to 0.0 (0).

Then at Revo Fitness Stadium, it was a competitive contest between Claremont and Swan Districts, but in the end it was the Tigers who were particularly impressive to win 8.8 (56) to 5.5 (35).

Reigning premiers East Fremantle then played its first home game since winning last year's premiership and after a thumping Round 1 derby win. But Subiaco spoiled the party to make it two-from-two to start the 2020 season with the 4.5 (29) to 1.2 (8) victory at New Choice Homes Park.

Round 3 of the WAFLW season gets underway this Saturday with Swan Districts hosting Subiaco at Steel Blue Oval in Bassendean, and Peel Thunder playing East Fremantle at Mandurah's David Grays Arena.

South Fremantle was back home to host Peel Thunder on Saturday with both teams looking for a first win of the WAFLW season, and in the end it was the visitors proving too strong.

While the Bulldogs and Thunder both lost their Round 1 matches, South Fremantle went scoreless in a big derby loss to East Fremantle while Peel pushed Swan Districts all the way before suffering a narrow defeat.

So the Thunder did deserve to come into this contest feeling better about their chances and that's how it played out with the gap between the teams already established in the WAFLW competition and the just-added South Fremantle becoming obvious.

For the second straight week to start life in the WAFLW having only been granted entry around a month prior to the 2020 season starting, South Fremantle didn’t manage to score as Peel went on to score the 9.10 (64) to 0.0 (0) victory.

Demi Okely came into the Peel line-up for the first time in 2020 and made an immediate impact kicking three goals while Jade Briggs and Kira Phillips kicked two apiece as well. Krystal Carter and Bailey Molloy were the others to kick a goal for the Thunder.

Captain, and South West Slammers basketball guard, Ebony Bilcich was outstanding to lead the way for Peel with Chloe Wrigley, Kate Ditchburn, Okely and Sarah Verrier among the other standout performers in the big win.

Emily Boothman also came into the side and was one of the strongest performers while Taylah Cruttenden, Tasha McAlpine and Tahlia Holtze were among the others to impress for the Bulldogs as the afternoon unfolded.

Claremont and Swan Districts were coming off strong Round 1 performances to start the WAFLW season setting the stage for a fascinating contest at Revo Fitness Stadium, and it didn’t disappoint.

Claremont might have lost narrowly to Subiaco to open the season but it was still an encouraging performance against such strong opponents while Swan Districts did well to hold out Peel in Mandurah to get things off to a winning start.

But there was a bit of drama for the black-and-whites in between Round 1 and 2 with the resignation of coach Leith Woods citing personal circumstances.

That added another level of intrigue to Saturday's game at the Claremont venue and it was the Tigers getting off to a fast start kicking three goals to one in the first quarter.

Claremont further asserted its advantage in the second quarter by holding Swan Districts scoreless and kicking two more goals themselves to lead by 29 points at half-time.

Both teams then kicked two goals each in the third quarter and Swans did outscore the Tigers in the final term, but Claremont still ended up winning impressively 8.8 (56) to 5.5 (35).

Jessica Low, Uhe, Hongell, Marley Simmons and Paige Hamilton-Smith were among the strong performers in the win for the Tigers.

Two winners from Round 1 and the top two teams from 2019 met on Sunday at New Choice Homes Park, and it was Subiaco who proved too strong for East Fremantle.

Spurred on by finishing as minor premiers last year and missing out on a Grand Final appearance, the Lions won a tight one in Round 1 against Claremont and then backed it up with a superb performance on Sunday at the East Fremantle venue.

Subiaco got off to a flying start with a dominant first quarter holding East Fremantle scoreless while kicking the three goals themselves.

It was then one goal apiece in the second quarter with Subiaco still going into half-time leading by 17 points.

The second half was then a tremendously scrappy affair with neither team managing a goal with Subiaco adding four behinds and East Fremantle not managing a score at all.

Lara Filocamo, Jayme Harken, Danika Pisconeri, Beatrice Devlyn and Tayla Thorogood were all outstanding in the win for the Lions.

East Fremantle's lone goal was courtesy of Katrina Tinson with Ruby Schleicher, Dynella Tripi, Madeline Ross and Lily Bird among the best performers for the Sharks.