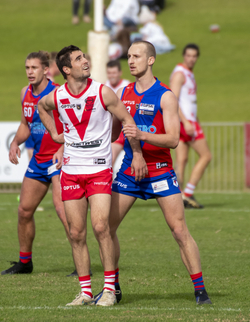 THINGS are beginning to take shape early this Optus WAFL Premiership Season with South Fremantle, Perth and Claremont continuing their winning starts in Round 2 action while East Fremantle responded impressively.

It's amazing how much things can feel like they are getting back to normal when you have WAFL action again and now two rounds into the 2020 season, things are certainly getting interesting.

Round 1 raised plenty of questions and perhaps the biggest was were East Fremantle as bad as the 95-point loss to South Fremantle suggested. Well the Sharks answered back strongly on home turf at New Choice Homes Park on Saturday to end up all over Peel Thunder to win 13.9 (87) to 6.9 (45).

The other three results then all saw the winners improve to 2-0 records on the season with reigning premiers Subiaco sitting out with the bye after an opening round loss to Claremont.

South Fremantle continues its recent dominance of West Perth but it was hard work at Provident Financial Oval in Joondalup with the Bulldogs prevailing 5.9 (39) to 4.7 (31) with the only goal of the final quarter.

Claremont then backed up its opening round win against Subiaco with a strong performance at home at Revo Fitness Stadium to defeat Swan Districts 13.7 (85) to 7.6 (48).

Perth's exciting start to the new season in their quest for a first finals appearance since 1997 continues as well at Mineral Resources Park with the Demons defeating East Perth 14.4 (88) to 10.7 (67).

Both East Fremantle and Peel Thunder were chasing their first wins of 2020 on Saturday, and it was the Sharks that finished the better to come away with the 42-point victory.

While both teams lost their Round 1 matches, they would have come away feeling vastly different with Peel taking heart from a competitive showing against Perth while East Fremantle were terrible in kicking three goals and losing by 95 points to South Fremantle.

East Fremantle immediately came out and delivered a strong first quarter on home turf at New Choice Homes Park, kicking three goals to match what they did a week ago.

The Sharks then also kicked the only two goals of the second quarter to be in control by 22 points at the major break.

But Peel wasn’t going to go down without putting up an impressive fight with Blair Bell and Hayden Yarran getting two early third quarter goals for the Thunder. Hayden Ballantyne and Brayden Lawler then closed the term with goals and it was a seven-point ball game.

East Fremantle had to respond from there and did so by kicking six goals to one in the final quarter and that saw the Sharks end up winning 13.9 (87) to 6.9 (45).

Making East Fremantle's eventual win all the more impressive was the fact they did it without three of their most important players who went out from last week, Nick Kommer, Cameron Eardley and Kody Manning.

The Sharks were able to find some avenues to goal with Milan Murdock, Ryan Lester-Smith and Lachlan Bailey all booting two goals apiece.

Jordan Snadden showed why East Fremantle was so excited to get him back in the line-up for 2020 by racking up 28 possessions with Blaine Boekhorst finishing with 25 touches, Tom Bennett 25, Cody Leggett 21, Morgan Davies 16 and Michael Tassone 16.

Captain Jonathon Griffin was strong in the ruck as the best big man on the ground finishing with 12 possessions, 31 hit outs and a goal.

Peel had just the one multiple goal scorer on the afternoon and that was Ben Middleton who kicked two goals from five kicks and three tackles.

It wasn’t pretty with the two teams combining for just the nine goals, but South Fremantle kicked the only goal of the last quarter to end up beating West Perth by eight points at Joondalup's Provident Financial Oval.

It kept South Fremantle undefeated to open the 2020 season while the Bulldogs have now won 12 of their past 13 matches against the Falcons including the last five on their trips to Joondalup.

South Fremantle peppered the goals to open the contest but missed on their three attempts with West Perth making them pay up the other end with the game's first goal courtesy of Keegan Knott.

South Fremantle did soon respond courtesy of their own small forward, Brandon Donaldson, but West Perth again took a rare chance through Connor West with scores level at quarter-time despite the Bulldogs having seven scoring shots to two.

Impressive South Fremantle recruit Jimmy Miller opened the second quarter with a goal to put the Bulldogs on top before a string of behinds from either side. It was Miller who broke that trend with his second just before half-time to hand his side a 10-point advantage.

It proved even harder to find goals in the second half for both teams with West Perth's Michael Lourey managing one early in the third quarter. But Caleb Datson responded for South Fremantle to steady up a 10-point lead before the Falcons got one back courtesy of Conal Lynch.

It was tough going in the final term but the only goal went the way of South Fremantle through Mason Shaw and that secured the eight-point win.

Jake Florenca continued his stunning start to the new season for the Bulldogs in the midfield, going to another level from where he left off in 2019. He racked up 32 possessions and laid nine tackles.

Jacob Dragovich also gathered 22 disposals for the Bulldogs to go with six marks and five tackles while Steve Verrier came into the side to produce 20 possessions, six marks and four tackles.

Kade Stewart shook off the tag from West Perth's Dean Munns to still have 18 possessions while Brock Higgins had another 16 disposals, six tackles and 33 hit outs to be clearly the most effective ruckman on the ground.

Zac Strom continued his hard-working start to the season too with 19 possessions, four marks and four inside 50s while Jimmy Miller impressed in his second game for the Bulldogs with 16 touches, 12 hit outs and two goals playing both as a key forward and back up ruckman.

The South Fremantle back-line was once again rock solid and conceded just the four goals for the game after only giving up three last week against East Fremantle.

Shane Nelson collected another 27 possessions for the Falcons with Blake Wilhelm again doing well setting up play out of the back-line with 22 disposals.

Connor West also finished with 17 touches, Conal Lynch 16 and Zac Guadagnin 15 while down back the Falcons' defence was able to do well to limit the dangerous South Fremantle to five goals for the day and Mason Shaw only the one.

Claremont backed up its impressive opening to the 2020 WAFL season by producing another strong showing to beat Swan Districts by 37 points on Saturday.

Claremont opened the season with a stunning upset over Subiaco in Round 1, but that would have counted for little if they didn’t back it up against a Swan Districts team looking for its first win of 2020 still.

With no Tom Lee as the main target for Claremont in attack, fellow veteran Anton Hamp has gone back to where he started his career as a forward, and he opened Saturday's game with the first goal in the opening minutes.

Swans then had their best moments of the game with the next two goals through Leigh Kohlmann, but Claremont responded thanks to Callan England and then Hamp again to be up by a goal at quarter-time.

Swans veteran Matt Riggio kicked truly to open the second term and draw scores level and then Josh Cipro put them on top, which they remained when Anthony Stephens kicked truly as well.

However, Claremont closed the first half with two majors to Alec Waterman and that saw the home team hold a five-point half-time advantage.

It was well and truly game on at the main break but Claremont then broke right away and dominated the second half, starting with the only three goals of the third quarter to lead by 26 points by three quarter-time.

The Tigers then added another four goals to two in the last term to run out 13.7 (85) to 7.6 (48) winners setting up a mouth-watering clash with the also unbeaten South Fremantle this Saturday at Fremantle Community Bank Oval.

Harry McCracken kicked three goals as well for the Tigers.

Leigh Kohlmann provided a good target in attack for Swan Districts kicking three goals but they do continue to struggle to have enough avenues to goal.

Corey Gault was once again outstanding in the ruck with 24 possessions and 31 hit outs.

The excitement and expectations surrounding Perth in 2020 continues to grow as they made it two-from-two with a 21-point victory against East Perth on Saturday.

Perth went ever so close to breaking its finals drought in 2019 before heartbreakingly missing out, but expectations are now again high in 2020 following the additions of Chris Masten, Fraser McInnes, Brady Grey and Andrew Fisher to their group.

Obviously now being without captain Corey Yeo for the season hurts and the loss of the likes of Clint Jones and Cody Leggett from last year need some replacing, but it's impossible to ignore the excitement that is growing surrounding the Demons.

It was second-game excitement machine Logan McDonald that gave Perth the ideal start on Saturday at Mineral Resources Park.

Jack Richardson then added another for the Demons and by quarter-time, they had piled on six goals to one against East Perth to be on top by five goals.

East Perth did get a goal back to start the second quarter thanks to captain Patrick McGinnity, but Fraser McInnes responded for Perth and it was only late goals from the Royals to McGinnity and Eddie Simpson that kept the visitors within 25 points.

Matthew Young then brought East Perth within 19 points to start the third quarter and it was well and truly game on by three quarter-time with the Royals within 11 points after a goal to ruckman Scott Jones.

East Perth stayed close and the margin was just nine points a couple of times in the last quarter after goals to Aidan Lynch and Jayden Magro. But Perth responded with the game's last two goals from Austin Davis and McDonald to win 14.4 (88) to 10.7 (67).