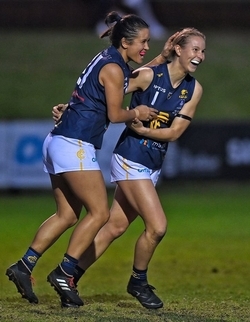 ROUND 2 of the Optus WAFL Women's Premiership Season features all three games played this Sunday afternoon highlighted by the live streamed contest between Claremont and Swan Districts.

It was an exciting opening round of the 2020 WAFLW season with Subiaco scoring a thrilling victory over Claremont, Swan Districts just managing to overcome Peel Thunder and then reigning premiers East Fremantle holding South Fremantle scoreless.

The six WAFLW teams are all back in action again this Sunday afternoon in three tantalising match ups with the stakes high considering it's just a seven-round home and away season before the finals.

The first WAFLW Round 2 clash takes place at Fremantle Community Bank Oval with South Fremantle attempting to put in a more competitive effort than last week up against Peel Thunder. The game gets underway at 1pm.

It was a tough initiation to the WAFLW for South Fremantle last week with the Bulldogs going scoreless up against reigning premiers East Fremantle.

They will be hoping for a better performance this Sunday and they have made wholesale changes as a result.

From that side, Kate Ditchburn, Demi Liddle and Demi Okely come in for the Thunder as Savannah Ahearn, Kaylah Bradshaw and Shantae Freeman go out.

Then at Claremont's Revo Fitness Stadium, Claremont will look to notch its first win of 2020 up against Round 1 winners Swan Districts.

Claremont only narrowly lost to Subiaco at Leederville Oval last Saturday night and from that team, Taylor Evans and Sarah Garstone come in while Samantha Barnett goes out.

Swan Districts did record a first up victory by six points against Peel but the black-and-whites have already had a coaching change with Leith Woods resigning after citing personal circumstances.

How that effects Swans will be anyone's guess but from the team that did defeat Peel last week, Shannon Matthews, Bianca Webb and Sarah Wielstra come into the line-up. Olivia Cripps, Taylor Ferguson and Courtney Lindgren are the trio to make way.

The final game of the round then pits East Fremantle and Subiaco against one another at New Choice Homes Park with the Sharks and Lions both attempting to remain unbeaten so far in 2020.

Reigning premiers East Fremantle were the big winners of Round 1 holding South Fremantle scoreless to win by 88 points while Subiaco fought hard to beat Claremont by two points under lights at Leederville Oval.

East Fremantle has made three changes from last week with Zoe Gillard, Ruby Schleicher and Roisin Walsh the inclusions as Sara Lewis, Chloe Reilly and Kahra Sprylan go out.

Subiaco, meanwhile, loses Tiah Haynes due to work commitments along with Jessica Ritchie, Emily Smith and Madi Wilkins but they do have some impressive inclusions with Lindal Rohde, Charlie Thomas, Maggie MacLachlan and Beatrice Devlyn.