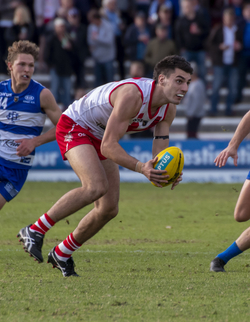 ALL of a sudden after the delayed start to the Optus WAFL Premiership Season, we are warming up for Round 2 this Saturday with four big match ups while Subiaco takes the break to stew over a rare first up loss.

The 2020 WAFL season might have suffered a delayed start, but it's amazing how quickly things begin to feel back to normal once we have had a full round of action on a Saturday, and now have another four matches to look forward to this Saturday.

Each game has high stakes too and plenty of fascination surrounding them after what we saw in the opening round including East Perth making its first appearance of 2020.

WAFL TEAM OF ROUND 1
OPTUS WAFL ROUND 1 WRAP

The later starting game takes place at Lathlain's Mineral Resources Park and begins at 3.05pm with Perth hosting East Perth. The game will be beamed live on Channel 7.

East Fremantle and Peel will be desperate for a strong bounce back performance on Saturday when the Sharks host the Thunder.

While Peel was infinitely more competitive than East Fremantle in Round 1, the fact remains neither team can afford to start this shortened WAFL season going 0-2 if they want to make a run for reaching the top four.

Round 1 went as bad as could have been imagined for East Fremantle with the 95-point loss to South Fremantle where the Sharks managed just three goals only the back of just 24 inside-50 entries while having 60 fewer possessions than the Bulldogs.

The Thunder did plenty of things right despite a 10-point loss to Perth but the stakes are now high on Saturday at Shark Park.

East Fremantle has made three changes with Tim Bockman, Nick Bonomelli and Jarrad Jansen coming into the side at the expense of Kody Manning, Kyle Baskerville and Ambrose Ryan.

Then at Joondalup, it looms as a tremendous contest between two of the winners from Round 1 in the form of the Falcons and Bulldogs.

West Perth came from behind to beat Swan Districts at Steel Blue Oval by 11 points while South Fremantle delivered an emphatic performance to hammer the Sharks by 95 points despite losing inspirational captain Dylan Main in the third quarter.

South Fremantle has an impressive record overall playing at Joondalup winning 19 of 28 visits north including the last four straight. And overall the Bulldogs have won 11 of their past 12 matches against the Falcons.

However, what will be sticking in their craw still is the fact that the one loss was the 2018 preliminary final at Fremantle Community Bank Oval when South Fremantle was virtually unbackable favourites.

Now the Falcons and Bulldogs lock horns attempting to improve to 2-0 to start the season.

West Perth has made three changes and have some big inclusions led by the returning Luke Meadows. Connor West and Noah Pegoraro also come in while Brayden Antonio, Tom Boyes and Tom O'Donnell go out.

South Fremantle has made just the one change with Main's spot being taken the experienced and versatile Steven Verrier.

Claremont scored the upset win of Round 1 beating Subiaco at Leederville Oval but that will count for little if the Tigers don't back it up on home soil against Swan Districts on Saturday.

The Tigers were supremely impressive in beating the Lions by 20 points and as a result have made just the one change for their clash with Swans, and it's a significant one.

Prolific midfielder Declan Mountford is in for Claremont while Anthony Davis makes room for him after making his debut in Round 1.

Swans were on track for a first up win last week too leading at three quarter-time before being overrun in the last quarter by West Perth.

They have made three changes with Tarir Bayok, Denzel More and Jack O'Sullivan all into the side at the expense of Mitchell Bain, Jackson Beck and Nelson Waite after he was named to the WAFL Team of the Round.

Last but not least is the televised game of Round 2 with the Demons hosting the Royals at Lathlain.

Perth had to do it tough last Saturday but got the points against Peel in Mandurah to make a winning start to their quest to break their finals drought in 2020.

East Perth had the bye in the opening round so now will be desperate to start their season on a positive note having to wait that extra week than everyone else.

Zac Hill, Guy Langdon and Jack Richardson are the inclusions for Perth while Regan Clarke, Kasey Nicholas and Caelen Penny go out of the line-up.