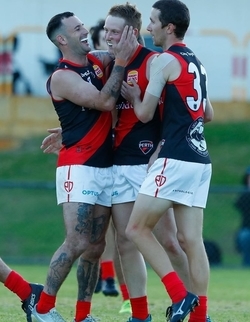 STARTING a season in mid-July might be something new for the WAFL, but it proved worth the wait with a fascinating opening round of the 2020 Optus Premiership Season which included a host of starring performances from players young and old alike.

COVID-19 has had a significant impact on just about every aspect of life right around the world and the WAFL competition is no different.

The anticipated April start date for the 2020 season ended up happening in mid-July, but the action is now underway and there were four matches with intrigue surrounding each of them for different reasons.

The crowds turned out in droves too to make the most of their first taste of WAFL action for the year with 3499 watching the Demons win in Mandurah, 2304 fans seeing Claremont beat Subiaco, 2916 at Steel Blue Oval and then 4002 at the port for the only Fremantle Derby of 2020.

That brings us to the TABtouch Team of the Round and there's an interesting mix of veterans like Player of the Round Chris Masten, Ben Howlett, Jye Bolton, Shane Nelson and Matthew Jupp, exciting youngsters Logan McDonald and Caleb Datson, and off-season recruits Nelson Waite, Fraser McInnes and Sam Fisher.

PLAYER OF THE ROUND
Who says this is an ever increasing young man's league. There's still plenty of room for a 200-game AFL premiership winning veteran still with run in the legs to come back and star in the WAFL, which Chris Masten put on full display for Perth on Saturday.

On the back of a tremendous AFL career that saw him play 215 games including the 2018 premiership having been drafted from East Fremantle back in 2007, Masten decided to sign with Perth to continue his WAFL career in 2020.

His Demons debut came significantly later than he might have anticipated, but he wasted no time showing on Saturday that he has plenty of run left in the legs and that he is strongly motivated to play a big part in Perth's attempt to breakthrough for a first finals appearance since 1997.

It took until the final quarter for Perth to shake off a dogged Peel in Mandurah on Saturday afternoon, but they ended up doing enough for the 10-point Round 1 victory and Masten was right at the centre of the action all afternoon.

Showing the traits that made him a mainstay of the West Coast midfield for more than a decade, Masten racked up 30 possessions to go with five marks, four tackles, four inside-50 entries and a goal in an outstanding performance on debut for the Demons.

Players of the Round
Round 1 – Chris Masten (Perth) 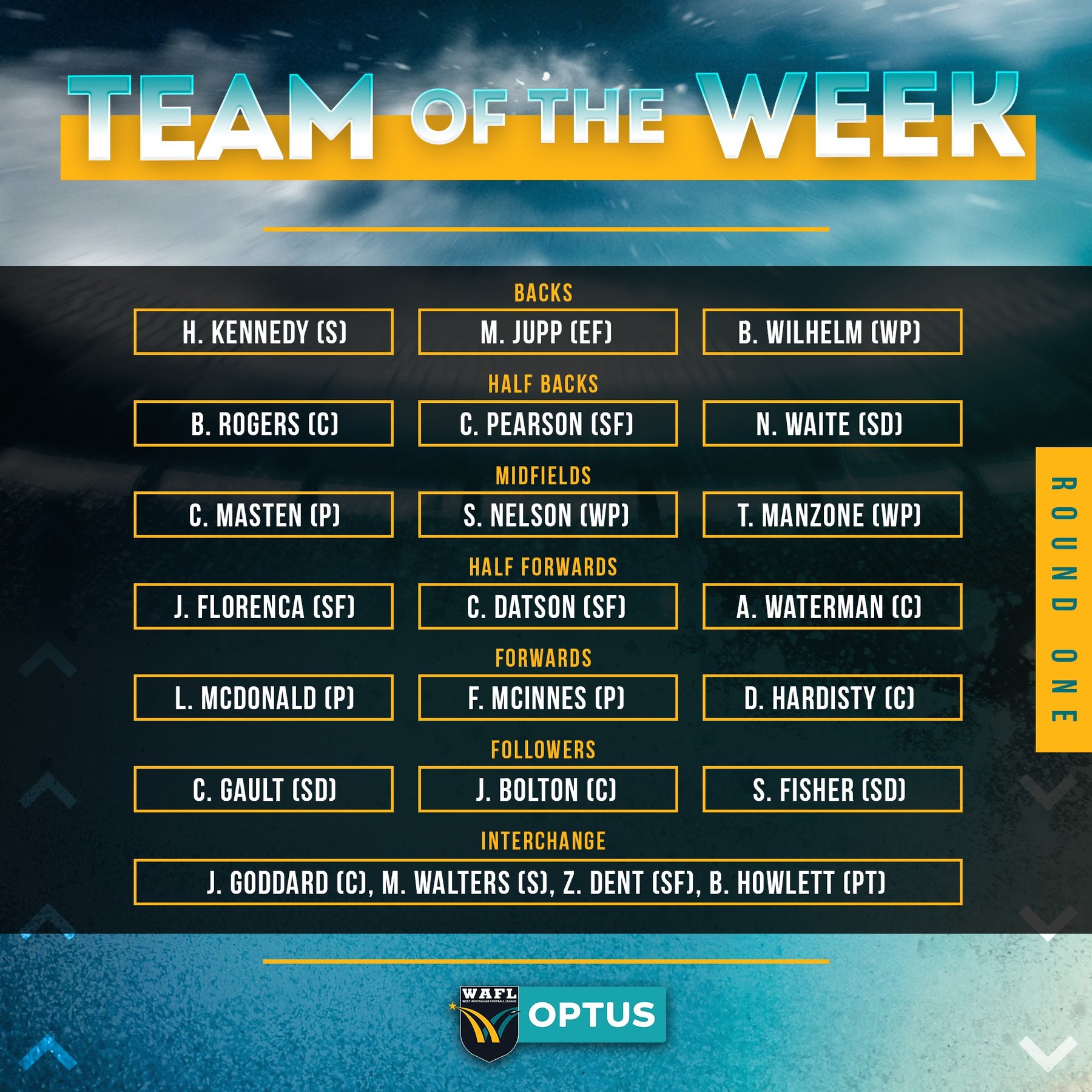 BACK POCKET – HAYDEN KENNEDY (Subiaco)
The triple premiership winning small defender started the new season off in tremendous form as an attacking threat coming out of the back-line for the Lions, and setting up play through the middle of the ground. Finished the rare loss to Claremont with 23 possessions, four entries inside the forward 50 and three marks.

FULL-BACK – MATTHEW JUPP (East Fremantle)
His team might have been beaten by 95 points, might have only kicked three goals and his opponent Mason Shaw still kicked three last quarter goals, but he was clearly doing all he could to play his part for his struggling side in the derby. Was actually inspirational at times with his defensive efforts on the afternoon with South Fremantle going inside on 54 occasions, it's just his teammates couldn’t lift as a result.

BACK POCKET – BLAKE WILHELM (West Perth)
Was named to the Team of the Round on three occasions back in 2019 and now the vice-captain has started off 2020 in strong form again as one of the best damaging and creative defenders in the competition. Was instrumental in the Falcons' come from behind win over Swans with his 18 possessions and three tackles.

HALF-BACK FLANK – BAILEY ROGERS (Claremont)
Continues to cement himself as one of the best attacking defenders in the competition and started off the season in fine form as the Tigers made a statement with their win over the Lions. He was instrumental in the final result too ending the game with 22 possessions, four inside-50 entries and three marks.

CENTRE HALF-BACK – CHAD PEARSON (South Fremantle)
His emergence as one of the best and most consistent young players in the competition continued as he started off the 2020 season in fine form. Coming off a 2020 campaign where he was named in the Team of the Year, he again settled into a defensive role but also spent some time up the ground in massive win over East Fremantle, finishing with 21 touches, five marks and three inside-50 entries.

HALF-BACK FLANK – NELSON WAITE (Swan Districts)
Made the move during the off-season from East Perth to Swan Districts craving more opportunities having only managed seven league appearance over the past three years. He showed on Saturday he can be handy in a variety of roles for the black-and-whites whether off half-back, through the middle or even going forward if needed. Ended the game with an impressive 18 possessions and five marks.

CENTRE – SHANE NELSON (West Perth)
The triple fairest and best winner, regular state player and premiership star has averaged over 30 possessions for his remarkable 159-game career, and it might have only been the shorter quarters that denied him of reaching 30 on Saturday in the win over Swan Districts. He was still tremendous for the Falcons with 28 disposals, five tackles and five inside-50 entries.

WING – TRENT MANZONE (West Perth)
Could very well be the most underrated player in the competition and has been since arriving from Queensland back in 2013. Has now amassed 124 games with the Falcons and been a remarkably consistent performer largely on the wing where he can use his running power to best effect. Was superb again in win over Swan Districts with 27 possessions, five marks, four tackles and a goal.

HALF-FORWARD FLANK – JAKE FLORENCA (South Fremantle)
Grabbed his chance to be a permanent midfielder at South Fremantle last year having served a solid apprenticeship, and based on his performance on Saturday in the big win over East Fremantle, he's going to take another step forward as an elite midfielder in 2020. He racked up 26 possessions, eight tackles, four inside 50s and a goal for the Bulldogs.

CENTRE HALF-FORWARD – CALEB DATSON (South Fremantle)
He bobbed up as a surprise option in attack for South Fremantle in the derby on Saturday and ended up delivering a career-best performance with four goals in the first half while finishing with 10 disposals. Looked impressive in the air and at ground level, and could be someone to offer great support to Mason Shaw as the season rolls on.

HALF-FORWARD FLANK – ALEC WATERMAN (Claremont)
Has had a horror run of injury and illness from the moment he first arrived at the West Coast Eagles, but his body appears to be giving him a good run at it now over the past 12 months and his form is backing that up. Playing largely up forward with midfield stints, he was pivotal in Claremont's win over Subiaco with 16 possessions, five inside 50s, four tackles and two goals.

FORWARD POCKET – LOGAN MCDONALD (Perth)
Talk about exciting debuts. He could still be playing colts but Perth threw the 193cm 18-year-old excitement machine in the deep end to make his WAFL debut on Saturday and he delivered a performance in attack that was instrumental in the eventual win over Peel. He finished up kicking three goals from 16 possessions and four marks.

FULL-FORWARD – FRASER MCINNES (Perth)
The Perth product has come back to the Demons in 2020 on loan from the West Coast Eagles due to them not being able to field a WAFL team, and he could very well end up being the difference to them ending their finals drought. Perth has been crying out for a key forward target and he could well be the answer after kicking three goals from 14 possessions and eight marks in the win over Peel.

FORWARD POCKET – DECLAN HARDISTY (Claremont)
The usual defender hurt his knee early in the game against Subiaco and it looked like not only would it end his day, but also leave him sidelined for some time. That may still be the case, but he was able to play out the game against the Lions in a new role in attack and made the most of every opportunity that came away. Ended up kicking four goals from his six kicks and it was a match-winning performance.

RUCK – COREY GAULT (Swan Districts)
Was back into the role he really starred in back in 2017 when he was named ruckman in the Team of the Year and won the Swan Medal. He has been used more as a key forward the last two years and you could argue Swans still need him in that role too, but the fact remains he is just too good in the ruck to not also use him there. Was dominant on Saturday with 21 possessions, six marks and 46 hit outs.

RUCK ROVER – JYE BOLTON (Claremont)
The Sandover and Simpson Medallist continues to show he is the trendsetter as far as midfielders go in the WAFL and he started this season despite having an injury scare just before it eventually got underway. But he showed no signs of that with the win over Subiaco finishing with 24 possessions, six tackles, five marks and five inside-50 entries.

ROVER – SAM FISHER (Swan Districts)
He arrived in the off-season with strong credentials from the VFL as a strong, prolific midfielder and certainly backed that up in spades on Saturday despite Swan Districts' narrow loss to West Perth. He did all he could with 29 possessions, five tackles, four marks and four inside-50 entries.

INTERCHANGE – JEREMY GODDARD (Claremont)
Continues to cement himself as one of the WAFL's best genuine ruckmen. In an age where clubs are electing more and more to go with the versatile athletes without great ruck skill at the actual taps, he is bucking that trend and it worked in Claremont's favour in the win against Subiaco. After leading the league in hit outs in 2019, he started off in that way again with 45 knocks to his credit on Saturday to go with six disposals and three tackles.

INTERCHANGE – MAX WALTERS (Subiaco)
It wasn’t the start to the season Subiaco was hoping for as the Lions chase a premiership hat-trick, but he continued on from where he left off last year with a fine start to the season both in the midfield and at half-forward. Ended the game against Claremont with 14 possessions, four marks, three tackles and two goals.

INTERCHANGE – ZAC DENT (South Fremantle)
Former East Perth defender cemented himself as an important player in the South Fremantle make up at half-back last year, and picked up again right where he left off to start 2020 against East Fremantle. Set up play impressively across half-back and ended the game with 21 possessions, six marks and three inside 50s.

INTERCHANGE – BEN HOWLETT (Peel Thunder)
The inspirational Thunder captain continues to give his all for the club he's a dual fairest and best winner at either side of played 124 AFL games at Essendon. He's now nearing 100 games with the Thunder and remains one of the hardest working midfielders in the league, delivering another 24 possessions and 11 tackles in Saturday's narrow loss to Perth.

UNLUCKY BUNCH
There were plenty of players who delivered tremendous performances across Round 1 but couldn’t quite fit into the Team of the Round, including: