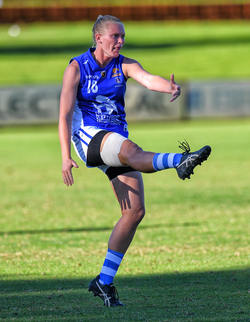 THE WAFL Women's competition also resumed on the weekend after the forced delay to the 2020 Optus Premiership Season and for the first time ever there was a Fremantle Derby with a big win for East Fremantle while Swan Districts and Subiaco also celebrated victories.

It's a new-look WAFLW competition for 2020 as well with the introduction of South Fremantle as the sixth club to the league when the Bulldogs were granted a full license a year earlier than originally anticipated.

The delayed start to the season thanks to the COVID-19 pandemic then created a tremendous sense of excitement over the opening of a season that will now consist of seven rounds before a three-week finals campaign.

The action got underway with two games on Saturday starting with the earlier fixture which took place at Mandurah's David Grays Arena.

It was a terrific contest as well with last year's Grand Finalists Swan Districts only narrowly overcoming the 2019 wooden spooners, Peel Thunder, 8.4 (52) to 7.4 (46).

Then on Saturday evening after the WAFL contest at Leederville Oval between the corresponding teams, Subiaco and Claremont locked horns in another tight and tense battle the whole way through.

It was then a standalone fixture on Sunday afternoon to mark the first ever Fremantle Derby in the WAFLW competition following South Fremantle being granted their license for 2020.

The Bulldogs were given the chance to host the game at Fremantle Community Bank Oval but it was East Fremantle who did the celebrating, ending up with the thumping 14.4 (88) to nothing triumph.

The 2020 WAFLW Optus Premiership Season got underway with a tremendous contest on Saturday with Swan Districts coming from behind to beat Peel Thunder by six points.

The first game in Round 1 of the 2020 WAFLW season took place on Saturday at Mandurah's David Grays Arena and while it featured a Peel team who were last year's wooden spooners and a Swan Districts team fresh off a Grand Final appearance, it was a cracking contest.

The game got off to an even start and little separated the two teams the rest of the afternoon.

Both teams kicked two goals apiece in the first quarter with scores all tied by quarter-time. It was another two goals each in the second quarter and still by half-time the teams couldn’t be separated on the scoreboard.

Peel then put some distance between themselves and Swan Districts by kicking three goals to two in the third term. That saw the Thunder lead by a goal at three quarter-time.

But then Swan Districts held Peel to just the one behind in the last quarter and kicked two goals themselves to end up winning 8.4 (52) to 7.4 (46).

Lauren Osborne, Aimee Ralph, Tara Stribley, Mikayla Hyde and Cox were among the standout performers too for Swans.

Tanisha Anderson, Abby Barnden, Courtney Rowley, Jaide Britton and Ebony Bilcich, a regular player in the State Basketball League with the South West Slammers, were among those to impress for Peel as well.

Subiaco and Claremont played out some thrilling contests in the inaugural WAFLW season and that continued in Round 1 of 2020 on Saturday with the Lions managing a two-point victory at Leederville Oval.

Subiaco did finish the 2019 WAFLW season as minor premiers but ended up losing to Swan Districts in the preliminary final giving them plenty of motivation to bring into 2020, and while they did start with a win, they sure had to earn it.

It was then a goal apiece in the third term meaning Claremont maintained a seven-point lead by three quarter-time.

Claremont then failed to score a solitary behind in the fourth quarter with Subiaco kicking 1.3 which set the Lions up to end up winning 4.6 (30) to 4.4 (28).

The two teams also met in the reserves clash at Leederville Oval on Sunday and this was an even tighter contest, with Claremont beating Subiaco 4.11 (35) to 5.4 (34).

The Youth Girls Rogers Cup clash between them also took place on Sunday morning at Leederville Oval with Claremont prevailing over Subiaco 5.7 (37) to 4.2 (26).

History was made on Sunday afternoon at Fremantle Community Bank Oval with the first ever derby played in the WAFL Women's competition, but it was East Fremantle who proved too strong romping to the 88-point victory.

South Fremantle has been granted its immediate license to join the 2020 WAFLW season a year earlier than initially anticipated, and there would be no better way for the Bulldogs to mark their debut than with a derby on home turf against East Fremantle.

The scoreboard might not have been overly flattering but the South Fremantle team now knows the level they need to get to and it will only be upwards from here as they adjust to life in the WAFLW competition after fielding a team at reserves level in 2019.

And it's not like they were facing an easy opposition on Sunday either. East Fremantle won the first ever WAFLW premiership in 2019 and based on their performance in Round 1, the Sharks deserve to be favourites to repeat that performance in 2020.

It might have been more than 10 months since East Fremantle beat Swan Districts to win last year's Grand Final to claim the premiership, but the Sharks continued the momentum into Sunday's derby at Fremantle Community Bank Oval.

The Sharks did kick two goals in the opening quarter before adding two more in the second, seven in the third and closed the deal with three more in the fourth to end up winning 14.4 (88) to 0.0 (0).

It was a full day of derby action on Sunday at Fremantle Community Bank Oval and in the reserves, it was a similarly emphatic win for East Fremantle who beat South Fremantle 20.11 (131) to 0.4 (4).