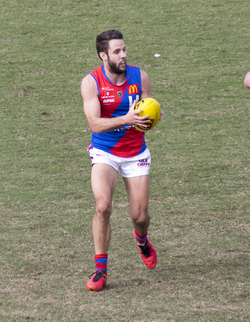 HE is one of the most prolific ball winners in WAFL history but triple West Perth fairest and best winner Shane Nelson is anything but content and is always looking to improve with the shortened 2020 season no different.

Ever since he made his WAFL debut back in 2012, Nelson has confirmed himself as one of the most remarkable natural ball winners the game has seen and along the way the accolades have accumulated.

He has now won three Breckler Medals as West Perth's fairest and best on top of being a regular state representative and having been a key player in the 2013 premiership for the Falcons, and perhaps unlucky not to have claimed the Simpson Medal on that day as well.

Along the way over the course of his remarkable 158-game career with West Perth that is showing no signs of slowing down, Nelson has averaged 30.1 disposals a game – that's right his career average has seen him average more than 30 possessions.

That is just simply remarkable and going back 12 months to 2019, he wasn’t far off his career mark averaging over 28 disposals and gather 30 or more touches in nine of his 19 appearances to once again end up named to the WAFL Team of the Year even if remarkably he only received three Sandover Medal votes.

Because he started his career so young and has missed precious few games along the way, it feels like Nelson should be older than the 27 years of age than he is, but what that means for him is that there is always room to continue to improve.

The increased time to now prepare for the 2020 WAFL season that begins this Saturday for West Perth against Swan Districts at Steel Blue Oval has given Nelson time to think about areas he'd like to get better in this season too.

The shortened quarters might mean it's difficult to rack up 30 or more disposals again this season, but what Nelson is going to focus on is being more damaging with the possessions he does win and in particular setting up more goals directly or kicking more himself.

"I think I'm going to have to play a bit more forward this year and that's the go for most of the midfield so that includes myself, Blacky, Mitch Peirce and Connor are going to be spending a lot more time forward," Nelson told 91.3 SportFM.

"We'll have to work something out with the less game time but we back ourselves in especially in those midfield roles that we have a lot of depth through there so we all should be able to share the minutes and workload around.

"What I am looking for this year is to try and have more impact on games. Finding the footy is something I've been able to do consistently throughout my career, but certainly from speaking with my midfield coach Matty Guadagnin and coach Geoff Valentine, we probably need more impact from the possessions I am getting.

"I'll look to try and get into more damaging positions this year and the shorter quarters might make it harder to rack up the same amount of possessions. I'm looking to try and get my hands on the footy as much as I can but to also have a bigger impact on games."

While Nelson is looking forward to trying to become a more damaging player in his own right in 2020, he's also got high hopes of what West Perth can still achieve on the back of playing in the Grand Final of 2018 and then again playing finals in 2019.

Even though the departures of Andrew Strijk, Corey Chalmers, Aidan Lynch and Jordan Mills are significant, the return of Luke Meadows offsets that somewhat and then Nelson is looking for natural in-built improvement from the likes of Tom Medhat, Conal Lynch and Connor West.

"Tom Medhat is one guy up forward is probably the biggest one to look out for this year. He got a few games at the end of last year and I expect him to have a pretty big season," Nelson said.

"Conal Lynch as well has had a massive pre-season before the break and when we came back he was still in very good nick so expect him and Connor West to play a massive part in our side.

"That's pretty exciting and basically we just need to try and help out Tyler Keitel as much as we can. Already in the practice matches it's been hard for him by getting double and triple teamed so it's a chance for some of the younger guys to stand up and stamp their authority on the competition."

COVID-19 has thrown the world into chaos in a lot of ways and during the delayed start to the WAFL season, Nelson did find it a challenge for motivation to continue to put in the fitness work when there was no guarantee of it being for anything.

However, once it was announced the season would be happening for sure and now ultimately has been brought forward two weeks from that initial start date, Nelson found his motivation levels rise and since then it's been all about getting ready for Round 1.

"It was a few months ago now that we were looking forward to getting into the season and to have it called off due to the Coronavirus was extremely disappointing," Nelson said.

"But at the same time you have to put things in perspective and all we had to do was put our heads down and continue to work through those tough times. It wasn’t easy training on your own but we are here now and exited to get stuck into the season, that's for sure.

It does get pretty lonely training on your own so that was probably the toughest part, and not having a set routine that you are doing every day with something to work towards.

"Running laps around the oval with minimal ball work is certainly tough, but then it's mentally tough not knowing when or where you will be playing.

"We weren’t sure if we were going to get a season this year, there was plenty of talk that it wasn’t going to go to ahead, and then when you get those words that it will go ahead, your motivation levels lift immediately.

"But certainly the hardest part was not knowing when we were going to play again and trying to keep training without knowing if it would be worth anything or not."