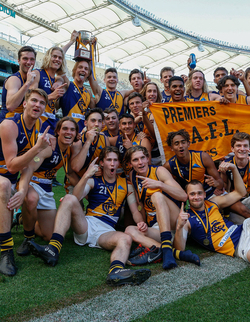 The 2020 Simply Energy WAFL Colts competition is set to commence on July 18, with a number of promising players set to shine in season 2020.

Clubs will play each other once across nine home-and-away matches with each club also having a bye. There will be a three-week finals series with the Simply Energy WAFL Colts Grand Final scheduled to be played on Sunday, October 4.

Below are some of the players to watch out for in the 2020 Simply Energy WAFL Colts competition.

KALIN LANE – CLAREMONT
Junior Club: Denmark-Walpole FC (GSFL)
The Denmark-Walpole product is a lightly framed ruckman who is still raw but has enormous upside. He only played one WAFL Colts game in 2019, but he has relocated to Perth for his university studies.

JOEL WESTERN – CLAREMONT
Junior Club/s: Subiaco JFC/Western Tigers JFC
A member of Fremantle’s Next-Generation Academy, Western is a small midfielder who can also be damaging when stationed in the forward line. He was instrumental in Claremont’s Colts’ 2019 Grand Final-winning team with 23 possessions and 6 tackles. Western finished second in the 2019 Claremont Colts Best and Fairest, and seventh in the 2019 WAFL Colts Coaches Award.

JACK CARROLL – EAST FREMANTLE
Junior Club: Chapman Valley (GNFL)
The 2018 WA Country Builders AFL Scholarship winner is a smooth-moving and skilful half-back flanker who has the capability to push onto a wing or even into the midfield. In 2019, Carroll finished fifth in East Fremantle’s Best and Fairest after he averaged 16 possessions, 3 tackles, 2 marks and kicked four goals across 12 games.

FINN GORRINGE – EAST FREMANTLE
Junior Club: Attadale JFC
The Aquinas College graduate is a medium-sized inside midfielder who is strong, tough, skilful and also defensively accountable. In 2019, Gorringe finished 17th in East Fremantle’s Best and Fairest after he kicked six goals and averaged 16 possessions, 4 tackles, and 3 inside 50s across six games.

BRANDON WALKER – EAST FREMANTLE
Junior Club: Kardinya JFC
The Fremantle Dockers’ Next-Generation Academy member is a small defender who loves to take the game on. Walker often uses his speed and skills to carve his way through the opposition’s defensive zone. In 2019, he finished equal ninth in East Fremantle’s Best and Fairest, and was also a member of the WA U18s State Academy but did not play a game. In 2018, he won All-Australian selection at the NAB AFL U16s Championships.

CHRIS WALKER – EAST FREMANTLE
Junior Club: Kardinya JFC
The Fremantle Dockers’ Next-Generation Academy member is a medium-sized utility who is tough, skilful and athletic. In 2019, Walker finished equal ninth in East Fremantle’s Best and Fairest after he averaged 10 possessions, 3 tackles and 3 marks across 13 games for the Sharks.

JACK HINDLE – EAST PERTH
Junior Club: Dunsborough JFC (SWFL)
The South West product is a key defender who boasts excellent athleticism. In 2019, Hindle averaged 10 possessions, 2 marks and 2 tackles across five games for the Royals. He was named in the best on three occasions, including both of the Royals’ finals against Swan Districts (11 possessions, 4 tackles, 3 marks) and West Perth (17 possessions, 5 marks).

ISIAH WINDER – PEEL THUNDER
Junior Club: Eaton Boomers (SWFL)
The Bunbury product is an exciting small forward who has demonstrated an ability to push into the midfield. In 2019, Winder finished ninth in the Jack Clarke Medal and ninth in Peel’s Best and Fairest after he averaged 18 possessions, 4 marks and kicked 9 goals across 18 games. He was one of Peel’s best in their Grand Final against Claremont with 10 possessions, 4 marks and 2 goals. In 2017, he was a member of the Rio Tinto Flying Boomerangs Squad.

LOGAN MCDONALD – PERTH
Junior Club/s: Coorow-Latham (NMFL)/Applecross-Mount Pleasant JFC
The Coorow-Latham product is a strong marking key forward who reads the play well, is strong overhead and is a good kick for goal. In 2019, McDonald played three games and kicked 3 goals for the WA U18s as a bottom-ager. In six games for Perth, McDonald kicked 9 goals and averaged 13 possessions, 3 marks and 3 tackles. In 2018, he won All-Australian selection at the NAB AFL U16s Championships.

NATHAN O’DRISCOLL – PERTH
Junior Club: Northam Saints JFC
The younger brother of Fremantle’s AFLW player Emma, Nathan O’Driscoll is a composed medium-sized defender who can push through the midfield. In 2019, he was a member of the WA U18s Leadership group and played three games for the Sandgropers as a bottom-aged player. He also finished second in Perth’s Best and Fairest despite only playing eight games. In 2018, he won All-Australian selection at the NAB AFL U16s Championships.

IRA JETTA – SOUTH FREMANTLE
Junior Club: Fremantle City Dockers JFC
A cousin of AFL players Lewis and Neville Jetta, Ira Jetta is a small forward who has the capability to push into the midfield. In 2019, Jetta finished second in South Fremantle’s Best and Fairest, and 14th in the WAFL Colts Coaches Award despite only playing nine games. In those 9 games, Ira kicked 5 goals and averaged 18 possessions, 6 tackles and 4 inside 50s. In 2017, he was a member of the Rio Tinto Flying Boomerangs Squad.

BLAKE MORRIS – SUBIACO
Junior Club: Kingsley JFC
The Kingsley junior is a medium-sized defender who is strong, quick, smart and skilful. He reads the play well, often positioning himself to intercept the opposition’s attacking entries. In 2019, Morris played for the WA U16s as an over-age player. For the Sandgropers, Morris averaged 17 possessions, 7 rebounding 50s, 6 marks and 4 tackles to win WA’s MVP Award and All-Australian selection. He also played two games for Subiaco’s Colts team.

DENVER GRAINGER-BARRAS – SWAN DISTRICTS
Junior Club: Kalamunda JFC
The 2019 Jack Collins-Alan Schwab AFL Life Members Scholarship winner is a key defender who is aggressive and powerful in one-on-one contests, reads the play well to intercept the opposition’s attacking entries, is a smart decision-maker with ball in hand, and an excellent distributor of the ball. In 2019, Grainger-Barras played two games for the WA U18s team as a bottom-aged player. He finished tenth in the Swans’ Colts’ Best and Fairest, despite only playing seven games. He also made his WAFL League debut against East Fremantle. In 2018, he won All-Australian selection at the NAB AFL U16s Championships.

TY SEARS – SWAN DISTRICTS
Junior Club: South Bunbury
The South Bunbury product is a medium-sized defender who is athletic, skilful and a good decision-maker. He can also push into the midfield if required. In 2019, Sears missed a chunk of the season due to a broken ankle. He still showed enough promise across 10 games to finish 14th in his Club’s Best and Fairest.

ZANE TREW – SWAN DISTRICTS
Junior Club/s: Hills Rangers JFC/Upper Swan JFC
The Swan Christian College graduate is a strong-bodied midfielder who thrives on the crash-and-bash side of the game. In 2019, he finished equal ninth in the Swans’ Best and Fairest and 12th in the Simply Energy WAFL Colts Coaches Award, despite playing just three games due to injury. Across the three games, he averaged 29 possessions and 7 tackles, including a dominant game against Perth (40 possessions, 10 tackles). In 2018, he won All-Australian honours at the NAB AFL U16s Championship.

KELLEN JOHNSON – WEST PERTH
Junior Club: Joondalup-Kinross JFC
The Hale School graduate is a key defender who is athletic, smart and skilful. Johnson’s ability to read the play allows him to position himself to intercept the opposition’s attacking entries, while he has also demonstrated an ability to set up plenty of attacking entries for his team due to his skill and decision-making. In 10 games for West Perth last season, Johnson averaged 10 possessions, 3 marks and 2 tackles.