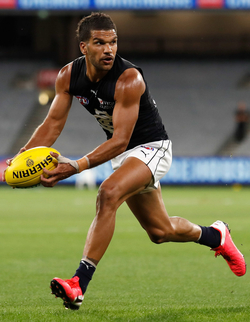 This article focusses on junior clubs in the Kimberley Region.

A number of great players have come from the Kimberley Region. Below are some of the most notable.

The Kimberley has proven to be an excellent region for exciting talented footballers wanting to play in either the WAFL or the AFL.

The Central Kimberley Football League (CKFL) comprises of six teams within the Fitzroy Valley region of the Kimberley. One team is from Fitzroy Crossing, while the five other Clubs are from Indigenous communities within the regions. The six clubs that compete within the CKFL are Bayulu Bulldogs, Junjuwa Magpies, Noonkanbah Blues, Wangkatjungka Crows, Yakanarra Dockers and Yiyili Tigers.

Below are some of the notable players to have come from the Kimberley region.

A Yungngora man, Zephaniah Skinner is arguably the most notable player to have originated from the Central Kimberley Football League. Across 2011 and 2012, Skinner played eight games and booted five goals for the Western Bulldogs. His best performances came against Geelong (17 possessions and a goal) and Richmond (12 possessions and 2 goals). During this time, he also played 23 VFL games for Williamstown. In 2016, he played two Reserve games for South Fremantle against East Fremantle (9 possessions and a goal) and Swan Districts (7 possessions and 3 tackles). In 2009, Skinner won the QAFL Rising Star Award after he booted 25 goals from 16 games for the NT Thunder. He polled 39 votes to comfortably beat Labrador’s Todd Grayson (19) and Morningside’s Tom Hickey (18). Skinner also played with the Claremont Colts between 2007 and 2008.

Affectionately known as either “Samo” or “SPS,” Sam Petrevski-Seton from Halls Creek was picked up with pick #6 in the 2016 AFL National Draft. In his three seasons of AFL football, Petrevski-Seton has played 65 AFL games, booted 19 goals and currently averages 17 possessions, 4 tackles and 4 marks. He won the 2017 Carlton Best First Year Player Award, finished sixth in the 2017 NAB AFL Rising Star Award and finished 10th in Carlton’s 2019 Best and Fairest. Prior to the 2020 season, he was rated as Carlton’s fifth best player due to his elusiveness, unselfishness, creativity and skill.

Known as “Hammer,” Hamling was born in Denmark, but was brought up in Broome. He was originally drafted by Geelong in 2011, but after three seasons without playing a senior match, he joined the Western Bulldogs as a delisted free agent. In his first season with the Bulldogs, he won the Best First Year Player Award and finished in the top 20 of the Best and Fairest. He was also one of the Bulldogs’ best players in the 2016 Grand Final triumph when he held Sydney’s Kurt Tippett goalless. He was traded to Fremantle after the successful 2016 campaign. In three seasons with the Dockers, he has played 62 games and has three top-ten placings in the Best and Fairest counts (2017: 6th, 2018: 7th, 2019: 7th). Prior to the 2020 AFL season, he was rated as Fremantle’s fifth-best player.

List of notable WAFL and/or AFL players who originally played in the Kimberley.