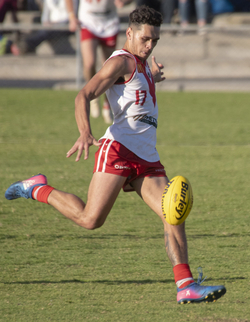 WHILE he did get a break from WAFL football and living in Perth he was after in 2019, Steven Edwards found himself missing being part of South Fremantle's journey and playing top-level football which has brought him back in 2020.

After three terrific WAFL seasons with South Fremantle, Edwards took a break to return to Albany and win a premiership at Royals in 2019, but he's back in 2020 at the Bulldogs and while he hoped to be back well before August, he can't wait to pull on the Red V once more.

Edwards originally made the move up to Perth from Albany and started playing colts football at Claremont which led to his first appearance at senior level for the Tigers in 2013 in the Foxtel against West Adelaide at Adelaide's Football Park.

He would gain seven more league chances at Claremont in 2014 but none in 2015 and that saw him craving a move to another WAFL home to attempt to show that he was capable of delivering at the top level.

South Fremantle proved to be the answer in a mutually beneficial trade for key defender Dylan Ross who made his return to Claremont, and Edwards had no trouble quickly settling into life at the Bulldogs.

Over the next three years with South Fremantle reaching the preliminary final in each of them, Edwards was an important member of the side largely as a small defender providing tremendous run and drive, but who could also go forward and kick a goal.

He was even named to the back pocket of the 2017 WAFL Team of the Year highlighting his quality, but the pull to head back home to Albany was always there and something he was constantly trying to deal with.

So after the 2018 preliminary final loss to West Perth, Edwards made the call to head back to Albany for 2019 both to live and to play his football at his original club, Royals.

He got that urge of being back home out of the system while starring in the Royals winning Great Southern Football League premiership, and then decided it was time to come back to South Fremantle with a degree of unfinished business.

While Edwards enjoyed the year back home in 2019, he did miss being at South Fremantle more and more especially once they overcame that preliminary final hoodoo to reach the Grand Final.

So when coach Todd Curley asked him to return, it didn’t take Edwards long to decide to take him up on it and now to hope them go one step better than just reaching the Grand Final in 2020.

"It certainly did give me that hunger back to play in the WAFL. Country footy is obviously a bit more laid back from that side of things, but it has definitely given me that hunger back. Then seeing the boys get into a Grand Final really drove that even further and I wanted to come back to Souths," Edwards said.

"Towards the end of last year Todd started to talk to me about the possibility of coming back, and seeing them in the Grand Final and actually winning a Grand Final of my own for the club I grew up playing with really gave me that fire to come back up here. To win the premiership with the red-and-white is now the dream.

"It was good to watch them play again last year. They played a really good brand of footy and it's always good to get over any hurdle, which was the prelim for us. They got to the Grand Final and even though the result was a bit unfortunate, hopefully this year we can build on that and bring it home."

Edwards was pumped to return to South Fremantle and then having gone through the pre-season, was ready to start the practice matches and finish off preparations for Round 1. But then COVID-19 and the restrictions struck.

There was a time where there was no guarantee a WAFL season would happen at all in 2020, but the decision has now been made for a Saturday August 1 start date.

Edwards can't wait for that and is counting down the days after what has been a challenging time during the isolation and restrictions in place thanks to the coronavirus pandemic.

"I was over the moon when I heard we'd still be having a season this year. Obviously we would have liked to have started a bit earlier, but due to the circumstances obviously we can't do that. To hear that August 1st is the date is just awesome. It's a bit like just counting down to August 1 now. I can't wait," Edwards said.

"It has been tough I can't lie. I've grown up playing footy my whole life and I obviously love it, so it's a bit tough to not have been able to watch it or even play it during all of this. It's certainly had a pretty big effect training-wise as well.

"We were given programs to do on our own which kept us kind of in good nick, but there's nothing better than getting to start training as a full group now to get around the boys and build that camaraderie."

Edwards might have only been away from South Fremantle for one season, but the change to the playing group has been stark including the departure of fellow Indigenous duo Marlion Pickett and Matthew Parker who are now in the AFL at Richmond and St Kilda respectively.

Then there's the likes of Ben Saunders, Ashton Hams, Ryan Cook, Cory Dell'Olio, Jarrod Parry, Shaun Bewick, Adam McIntosh and Shane Hockey who are all no longer at the Bulldogs so it's a vastly different playing group Edwards is returning to for 2020.

He now returns an experienced player and is looking forward to settling in with the new faces.

"It has been a big change obviously and towards my last season there losing Cooky and Hamsy, that's just like 500 games of experience lost there with those two," he said.

"Then there's also Saundo, Dell'Olio and it just goes on so it's very different now back at the club with all those guys. But every year you get a few players that will change it up so you do come to expect that and now we're looking to really gel with this group that we've got and we'll take it from there I guess."

Two of those new faces that have brought plenty of excitement to South Fremantle in the build up to the 2020 season is Perth recruit Cody Ninyette and Ben Rioli from the Northern Territory.

Ninyette might look set to settle as a small forward and Rioli off half-back, but Edwards has already been impressed with how they've settled in and is especially excited to see the Rioli name continue at the Bulldogs.

"I haven’t really had to do anything special to help them fit in because they've done a pretty good job of that themselves. When I came back for the first time, it already looked like they were getting along with everyone and like they'd known the other players for years," Edwards said.

"Ben has fitted in especially well and he's getting along really well with all the boys. I'd watch him play on NITV for a few games when he was with St Mary's and the NT Thunder so I already knew he was a really exciting player.

"His run off half-back is just amazing and now I can't wait to see what he can do for the red-and-white."

What Edwards has noticed in coming back to South Fremantle is that hunger after losing last year's Grand Final to give themselves a chance at redemption for 2020.

"I think all the boys are real keen and hungry to try to go that one step better this year," he said.

"You can sense the energy around training and stuff already, everyone is up and about. Even though it's going to be a shortened season, we just want to make the most of it and go from there."

As for his own football, Edwards would like to settle back into a role in the defence at the Bulldogs but in the bigger picture, he's happy to be back living up in Perth now that he's got it out of his system to get back home to Albany for an extended stretch.

"I'd probably have to say I like playing at half-back best just because of the run it lets me give and it can really open the game up. It is good to know, though, that the team can rely on me to be able to play forward or back so I think that's a pretty handy thing to have these days with the way the game is played," Edwards said.

"I guess it's only four hours away sort of thing so I try to remember that. Having the year off last year made me realise that a lot of the people back home aren't really going anywhere. All of my family are still down there but at the end of the day it's just a four-hour trip. Living up in Perth just offers a lot more variety for whatever area you want to excel in so I am happy to be up here."