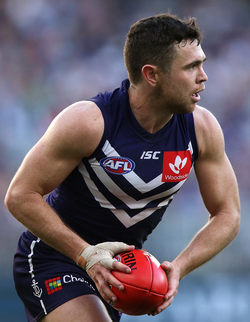 This article focusses on junior clubs in the Peel Football League.

A number of great players have come from the Peel football region. Below are some of the most notable.

Of Noongar heritage, Wilson has gone on to become a reliable rebounding defender since his debut in 2012. In eight seasons, he has played 116 games (39 with Fremantle and 77 with GWS), and currently averages 15 possessions, 4 marks and 4 rebounding 50s. He has represented the Indigenous All-Stars twice in 2013 and 2015, and in 2018 he finished sixth in Fremantle’s Best and Fairest Award. Prior to this season, Wilson was rated as Fremantle’s third best defender behind Luke Ryan and Joel Hamling, and Fremantle’s seventh best player overall.

Of Antiguan and Jamaican descent, Frederick is one of the most recognised footballers in the NAB AFL Women’s competition. Across four seasons, Frederick has played 29 games (23 with Brisbane and 6 with Richmond), kicked 18 goals and currently averages 10 possessions, 4 tackles and 3 marks. Her 2017 campaign was memorable as she won All-Australian selection as the centre half-forward, represented the Allies in State of Origin, finished second in the NAB AFLW Rising Star Award and finished second in the Lions’ Best and Fairest. She also won All-Australian selection in 2018 (centre half-forward) and had a further two top-ten placings in the Best and Fairest Count (2018: 5th in B&F, 2019: 7th).

The cousin of former Hawthorn player Harry Miller, Wells was one of the greatest Indigenous players of the modern era. Across 17 seasons, Wells played a total of 258 games (243 with North Melbourne and 15 with Collingwood), and kicked 166 goals. His 243 games at North Melbourne places him twelfth for most games played in the Kangaroos’ history. Across his career he won two Best and Fairests (2011, 2013), represented Australia in the International Rules Series (2003, 2005, 2008, 2013), including captaining the 2013 squad, represented the Indigenous All-Stars on two occasions (2005, 2007), won the Polly Farmer Medal in 2005, won the AFLCA Best Young Player of the Year Award in 2004, the AFLPA Best First Year Player Award in 2003, and the AFL Goal of the Year in 2004. Prior to being drafted, Wells finished second in the 2002 Sandover Medal Count.

An Adelaide Football Club Community Programs Officer, Randall is one of the premier players of the AFLW competition. In her career to date, Randall has played 23 games for Adelaide, has won two AFLW premierships (2017, and 2019), three AFLW Players’ Most Courageous Award (2017, 2018, and 2019) and three All-Australian guernseys (2017: half-back flank, 2018: centre half-back, and 2019: centre half-back). In 2018, she won Adelaide’s Club Champion Award and finished third in the AFLW Best and Fairest.

List of notable WAFL/AFL players from the Peel Football League.