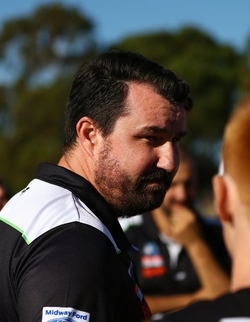 SWAN Districts coach Adam Pickering is excited to have a start date for the WAFL season to now work towards and is looking forward to a potentially more attractive brand of football with the shorter quarters.

The 2020 WAFL season will now commence on Saturday August 1 having been delayed due to the COVID-19 worldwide pandemic with the later start meaning it will be a nine-team, nine-round competition.

That will see every team play one another once heading into a finals series but the games themselves will be condensed to consisting of 16-minute quarters plus time-on to align with the rules the AFL will be playing under as well in 2020.

Pickering sees the potential of some natural flow-on positive effects in the WAFL competition from the shorter quarters with the prospect of less congestion, and more attacking football being played.

Having had plenty of time to consume some matches on Fox Footy from 20-plus years ago in recent months thanks to the Coronavirus, Pickering wouldn’t mind seeing the style of football played in the WAFL go back in time a little.

"It is a long day and maybe having shorter quarters might speed the game up, and teams might be looking to score quicker and more efficiently," Pickering said on 91.3 SportFM.

"There is some positives to it but if they stayed at 20 plus time on that would have been fine too, we have enough depth there to cover that. I'd like to see some tweaks in the rules that may make the game a little bit more attractive especially at this second tier level.

"This is just a fact and the skill level in the WAFL isn’t the same as the AFL so the congestion and rolling mauls tends to happen a bit more.

"You can almost get away with it in the AFL because the skill level is so high and you expect that from full-time athletes, but when you are playing that sort of system at our level when you only get the guys for two or three nights a week, it's tough.

"A lot of guys are out on the tools on the day and are tired when they get to training so you don’t get to work on those intricacies as much as you'd like, so any of those sort of rule changes we can make to make the game more attractive at this level I'm all for.

"I've been watching those old games the last couple of months and I think the footy in that era was fantastic. The guys were strong, quick and skilful, but it was just before that full ground press came in and the ball movement was really slick, and free-flowing. I'd love to see our competition get back to something like that."

While Pickering doesn’t necessarily think the fact that it's just a nine-game season and that the quarters could end up being anywhere from five to 10 minutes shorter will change the way he coaches entering his third season at the helm, it will cause natural changes.

Pickering sees the prospect of less rotations now and players being able to stay on the ground for longer due to the shorter game time while speed rather than endurance might now become the most attractive asset for the players.

"I've spoken to our sports scientist about it, Ted Polglaze, and we've got some ideas around what we might have to do differently," Pickering said.

"We have talked about putting more speed work into our guys, do we have a system in place with our rotations where the guys can stay out there longer and that sort of stuff. There are definitely little things you can tweak, but I don’t think it will change how our coach.

"I think it's more about communication and trust in the players that they are going to play to the system that you implement from week to week. COVID-19 and social distancing might change things more, I might not even be allowed to have my assistants in the box on match day.

"I might just place Stav and these guys around the oval with headsets on. They might be on the can bar on game day."

Given there was a very real prospect that the WAFL season might not be able to go ahead in 2020 at all like a host of sporting competitions across the country and world, Pickering was just happy to hear the August 1 start date even if it does feel like a long time away still.

But the positive is that it gives those at Swan Districts a chance to have a solid lead in with their players to ensure they are both a combination of being cherry ripe to go along with freshened up ahead of Round 1.

When you consider their last game was August 24 last year and they have been in some sort of training now for nearly nine months, freshening up could well be just as important as anything.

"We've waited this long, so what's another two months really but it was pretty exciting to finally get a date. It's still a while away but the positive to that is that it gives us a chance to really plan and hit the ground running when the season does come on to us," he said.

"Our biggest focus now is on making sure our whole squad, especially our top 35 to 40 players that will be pushing for league selection, are fit and strong, and in good shape by August 1. That's physically and mentally.

"These guys, if you go through to the end of this 2020 WAFL season coming up, most of these guys will have been in training for 11 months from when we started pre-season.

"It's a really long time to keep them up and mentally fresh so it's about not only having them physically ready, but mentally fresh and ready to go for when the season comes around. That's the biggest priority for us."

It looks likely that the clubs will play a couple of practice matches in the lead up to the August 1 season-opener and for Pickering, they will likely take on a different look than a usual February or early March pre-season game would.

"We probably had three lead in games for a normal season and we'd use the first one to have a look at some young guys who hadn’t been exposed, and we were probably going to do that again this year," he said.

"But now with the shortened season, we'll probably look at those practice matches as a chance to get our top end guys ready and going for Round 1 rather than taking the opportunity to look at the younger guys.

"They take on a different shape in my mind anyway this year so in terms of the premiership points beyond that, I don’t think it was financially viable to have a longer season.

"Because without crowds you are still going to have a bigger outlay in terms of costs so the only viable thing was to shorten the season so I'm totally supportive of that."

Now that it's a nine-week plus finals season that Swan Districts is preparing to be part of in the WAFL rather than a season double that length, Pickering and the black-and-whites feel blessed to have the sports scientist in charge of their program that they do.

"Getting them physically prepared and mentally ready is now the priority at the moment," Pickering said.

"I think we are pretty lucky because Ted has a background of being involved in Olympic sports so a lot of his preparation for his athletes has been based around getting ready for a tournament where they train and peak for a shorter time, rather than a full football season.

"Ted was looking forward to the season obviously, but seeing the shorter season is actually more in his wheelhouse so he's pretty excited about it."