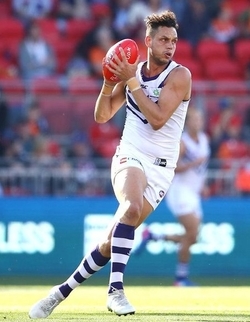 The Perth Demons metropolitan district is situated in Perth’s eastern and southern suburbs encompassing the cities of Belmont, Canning, Gosnells, South Perth, as well as the Town of Victoria Park.

A host of prominent WAFL and AFL footballers have come from the Perth Demons District. Here are some of the more notable:

A small midfielder, Anderson went to become a star at WAFL level, as well as playing in several AFL seasons. He was originally drafted to Geelong in 1995, but was delisted at the end of 1996. In his first season back at East Perth, Anderson went on to win the Sandover Medal after winning a late invitation to the event. Subsequently he was re-drafted, this time by North Melbourne where he would play 28 games across three seasons, and would be a member of the 1998 Pre-Season Premiership team (Ansett Australia Cup). After his time at North Melbourne came to an end, Anderson would play a further 31 games with Swan Districts over two seasons.

The cousin of former AFL players Ash, Cory and Toby McGrath, Dion Woods was a key member of the Dockers’ defence between 2001 and 2005. During this time, Woods played 59 games and had career averages of 13 possessions (5 contested), 4 marks and 3 rebounding 50s. In 2001, despite only playing eight games, he won Fremantle’s Best First Year Player Award after he averaged 11 possessions (5 contested), and 3 marks. He was also a member of the 2005 Indigenous All-Stars team. Woods also played 57 games for the Perth Demons between 2000 and 2006.

The son of dual WAFL Premiership player Steve Hargrave, Ryan went on to become a strong contributor with the Western Bulldogs. Across eleven seasons, Hargrave played 203 games (ranked #23rd of games played by a Bulldog) and had career averages of 17 possessions, 5 marks, and 3 rebounding 50s. He won the Western Bulldogs’ Best First Year Player Award in 2002, after he averaged 10 possessions (5 contested) and 2 marks, and was nominated for the AFL Rising Star Award after a stellar performance against Fremantle (14 possessions and 2 goals).

The younger sister of former Fremantle player Joel Houghton, Gemma has quickly become a star for the Fremantle Dockers’ AFLW team. Since 2017, Houghton has played 24 games, booted 16 goals and currently has career averages of 10 possessions and 3 marks. She won All-Australian selection in 2019 (forward pocket) and in 2020 (centre half forward). She was also Fremantle’s Leading Goalkicker.

Of Ukrainian heritage, Woewodin was a star for both Melbourne and Collingwood. In total he played 200 AFL games (138 with Melbourne and 62 with Collingwood) across nine seasons. He is best remembered for winning the 2000 Brownlow Medal, ahead of the Western Bulldogs’ Scott West, becoming just the third Melbourne player to win the Brownlow. In 2000, he also won Melbourne’s Best and Fairest after he kicked 20 goals and averaged 22 possessions, 5 inside 50s, 5 clearances and 4 marks across 25 games. Despite Melbourne losing to Essendon in the 2000 AFL Grand Final, Woewodin was one of the Demons’ better players with 20 possessions and 6 inside 50s. After his playing career, Woewodin was appointed the Senior Coach of East Fremantle, and then became the Offensive Skills Coach of the Brisbane Lions and later was Head Coach of the Lions’ NEAFL team.

The son of former East Perth player Jim Spencer, Peter Spencer is one of the Royals’ best ever players. In total, he played 185 games (19th most by a Royal and kicked 322 goals (8th most by a Royal) for East Perth across 10 seasons. During his time with the Royals, Spencer won two Sandover Medals (1976, 1984) and three Club Best and Fairests (1975, 1976, 1983). Spencer also had brief stints with North Melbourne (24 games and 32 goals), Subiaco (21 games and 47 goals) and Claremont (2 games and 4 goals). He also played seven games and kicked 11 goals for Western Australia in State or Origin between 1976 and 1982. After his playing career, Spencer went to become a sports commentator with the ABC, and also helped coach Aquinas College’s football team. In 2007 he was inducted into the WA Football Hall of Fame.

Affectionately known as “Doogs”, McDougall was a powerful key forward who played 43 games with the West Coast Eagles (38 games) and the Western Bulldogs (5 games) between 2001 and 2008. He finished second in West Coast’s Leading Goalkicker Award in 2004 when he booted 35 goals from 21 games. McDougall also played 108 WAFL games across 11 seasons with Perth (85 games) and Subiaco (23 games). He was a key member of Subiaco’s Grand Final triumph over East Perth in 2014 with 10 possessions and 18 hit-outs. He is now an AFL Player Manager at Corporate Sports Australia.

List of notable players from the Perth Junior Football District.