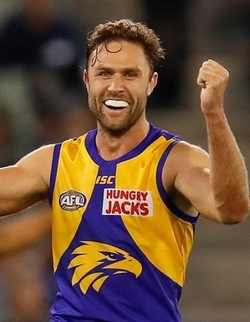 The East Perth metropolitan district is situated in Perth’s central and northern suburbs encompassing the cities of Bayswater, Perth, Stirling, Swan and the Town of Vincent.

Some of the most notable footballers to have hailed from the East Perth District can be seen below:

The onetime policeman, John Watts is the only Australian Rules footballer to win three premierships with three different teams in three different states. He won three WAFL premierships with East Perth (1956, 1958, 1959), the 1963 VFL premiership with Geelong and Captain-Coached Hobart to the 1966 TSL Premiership. In total, Watts played 271 games (166 with East Perth, 52 with Geelong and 53 with Hobart) across 15 seasons. He also played 12 games for Western Australia in the State of Origin, and was the recipient of the 1959 Simpson Medal. During his time with Geelong, Watts penned the Club’s theme song, which is still used today. After his playing career, Watts became a star in the media, working with organisations such as Channel 7, and 6PM Radio Station (now Hit 92.9). He has been regarded by many as the person who created the prototype to modern football panel and breakfast radio style programs.

The 2009 WA U18s Championships-winning captain has put together an outstanding football career. Hutchings was originally drafted to St Kilda in 2009, but was delisted at the end of 2010. In 2011, he joined West Perth where he played 55 games across four seasons. In 2012, he won West Perth’s Best and Fairest, and finished second to Kane Mitchell in the Sandover Medal. He won the Simpson Medal after a starring performance for West Perth in their 2013 Grand Final triumph over East Perth (29 possessions and 3 goals). Since 2013, Hutchings has played 113 games and kicked 46 goals for the West Coast Eagles. He won the 2017 Best Clubman Award and finished seventh in the 2018 Best and Fairest. He was instrumental in West Coast’s 2018 Grand Final success, finishing with 15 possessions and a goal, while also limiting the impact of Collingwood star Steele Sidebottom.

Known as “Clanger,” Pearce is one of only eight players of Indian descent to play AFL football. He was a strong contributing footballer for Fremantle between 2009 and 2016. Across eight seasons, Pearce played 100 games (35th most for Fremantle), kicked 36 goals and had career averages of 17 possessions, 5 marks and 3 tackles. His best season came in 2012 when he finished ninth in the Best and Fairest, after he averaged 20 possessions, 5 marks, 4 tackles and kicked 16 goals across 24 games. In 2007, he was a member of the Swan Districts’ Colts premiership side. In 2008, he won All-Australian selection after a stellar carnival for Western Australia, and was named the Captain of the WAFL Colts Team of the Year.