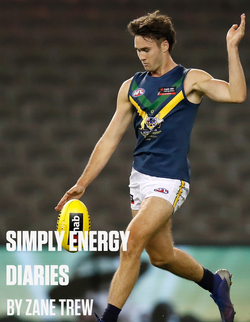 In a time of great uncertainty around the footballing world, we take you inside the lives of our Western Australian Under 18s as they navigate their way through an unprecedented 2020 season. The positives, the negatives and the new opportunities that present themselves will all be told in the ‘Simply Energy Diaries.’

For the first time in a long time, training will feel normal from next week onwards. We have returned to the club in groups of 20, but from Saturday we can tackle and train together.

Over the past few weeks at Swans we have been training in groups of 20. It’s obviously been a while since we’ve been back at the club, but it has been great to see the faces you haven’t seen in a while. For me particularly, that’s the league side. We got straight to work in groups, and it was nice to mingle and catch up.

The one positive in training within smaller groups has been the ability to form better connections with some guys. Getting to know some teammates better that I otherwise might not have. It feels strange though, I haven’t seen half the group yet!

Over the enforced break I developed a pretty close friendship with one of the boys that has come over from Victoria, Frank Anderson. He was at the Northern Blues previously, and he has been awesome for me. We’ve been doing a lot of running in the break. Given we play pretty similar position he will be perfect to learn off as we return to footy.

I tried to get out as much as I could within the restrictions during the couple of months. Tried to see my mates as best we could and because of that I’ve found it slightly easier to get back to normal.

I am a pretty self-motivated type of guy. Being able to do stuff alone like weights and running hasn’t really phased me, but I have missed the team environment that football brings.

Season date & looking to the future

To have a date locked in to start the WAFL season certainly has a lot of the boys excited. It gives players something to look forward to but also something to strive towards. Beforehand, we had no idea of when footy would return but to be able to have some form of routine back is great. It gives us plenty of time to put the work in and be fully prepared for 2020.

The physical and mental side of my game is super important to me over the next eight weeks. I want to be ready to go and it is a great opportunity to get the body really ready. I feel mentally refreshed from the break and to hear that the draft will go ahead has been a welcome relief.

The academy throughout the whole process has been unreal. Adam Jones and Lee Walker as well as all of the backroom staff they’ve been in contact all of the time.

Those blokes keep us mentally together and in it – there are super supportive. Couldn’t ask for a better bunch of blokes to run the Academy.