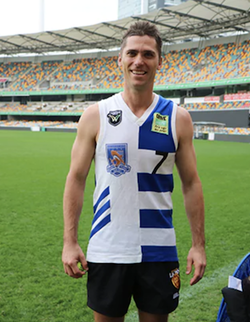 A host of prominent WAFL and AFL footballers have come from the East Fremantle District. Below are some of the more notable players who have originated from this particular district.

The East Fremantle District has a rich history of producing outstanding WAFL and AFL talent.

Below are some of the notable players to have come from the East Fremantle District.

The brother of former Richmond players Ian and Craig, Neil Balme has put together a fantastic career in football. He played a total of 176 games across 14 seasons (159 games with Richmond, 13 with Norwood, and 4 with Subiaco). He was a member of Richmond’s 1969 U19s Premiership team and was also a key member of the Tigers’ senior premierships in 1973 (12 possessions, 5 marks and 2 goals) and 1974 (11 possessions and 2 goals). After his playing career, Balme went on to become an outstanding senior coach. Between 1980 and 1990, he coached 270 games at Norwood in the SANFL where he led them to two premierships in 1982 and 1984. In 1991, he became the inaugural coach of Woodville-West Torrens, and in 1993 he became the Senior Coach of Melbourne. After leaving the Demons in 1997, Balme went on to make a name for himself as an excellent football administrator. He was Collingwood’s Football Operations Manager between 1998 and 2006. He was Geelong’s Football Operations Manager during their golden reign from 2007 to 2013. Between 2014 and 2016, he went back to Collingwood where he served as the Club’s Director of Coaching. At the end of 2016, Balme became the General Manager of Football at Richmond, where he is presiding over their current golden reign.

The cousin of Australian cricketers Shaun and Mitch Marsh, Sheppard has become one of the best general defenders in the AFL – rated ninth best in this role prior to the 2020 AFL season. Across 11 seasons, Sheppard has played 179 games and currently averages 16 possessions and 5 marks. He has five top-ten placings in a Best and Fairest count (2015: 6th, 2016: 9th, 2017: 10th, 2018: 8th, 2019: 3rd). He has a reputation for being a big-game player, highlighted by his 2015 Player of the Finals Award and 2019 Glendinning-Allan Medal. He represented the All Stars in the 2020 State of Origin for Bushfire Relief Match.

Of Ukrainian heritage, Woewodin was a star for both Melbourne and Collingwood. In total he played 200 AFL games (138 with Melbourne and 62 with Collingwood) across nine seasons. He is best remembered for winning the 2000 Brownlow Medal, ahead of the Western Bulldogs’ Scott West, becoming just the third Melbourne player to win the Brownlow. In 2000, he also won Melbourne’s Best and Fairest after he kicked 20 goals and averaged 22 possessions, 5 inside 50s, 5 clearances and 4 marks across 25 games. Despite Melbourne losing to Essendon in the 2000 AFL Grand Final, Woewodin was one of the Demons’ better players with 20 possessions and 6 inside 50s. After his playing career, Woewodin was appointed the Senior Coach of East Fremantle, and then became the Offensive Skills Coach of the Brisbane Lions and later was Head Coach of the Lions’ NEAFL team.

The son of former East Fremantle and Port Adelaide player Roger Kerr, Daniel was a hard-running inside midfielder who played 220 AFL games across 13 seasons for the West Coast Eagles. His 220 games place him fifteenth for most games played by an Eagle, and his 122 goals place him twentieth for most goals kicked by an Eagle. Throughout his career, Kerr was in five top-five finishes in his Club’s Best and Fairest (2001: 5th, 2002: 2nd, 2003: 4th, 2004: 5th, 2007: 5th), had three top-three placings in the Brownlow (2005: 2nd, 2006: 3rd, 2007: 2nd), won All-Australian selection in 2007 (ruck-rover), represented the Dream Team in the 2008 Hall of Fame Tribute Match, represented Australia in the 2002 International Rules Series, won the 2001 AFLPA Best First Year Player Award and finished second in the 2001 NAB AFL Rising Star Award. He was also a key player in West Coast’s 2006 Grand Final triumph over Sydney with 20 possessions (11 contested), 6 clearances, 5 tackles and 4 inside 50s.

Born in Johannesburg, Johannisen has quickly become a fan favourite of the Western Bulldogs. He is best known for winning the Norm Smith Medal after a stellar performance in the 2016 Grand Final that saw him finish with 33 possessions, 9 inside 50s, 7 rebounding 50s and 7 marks. In his career to date, Johannisen has five top-ten placings in a Best and Fairest count (2015: 6th, 2016: 10th, 107: 2nd, 108: 7th, 2019: 4th), won the 2015 Tony Liberatore Most Improved Award and was also a key member of the Western Bulldogs’ 2014 VFL premiership. Prior to this season, he was rated as the Western Bulldogs’ sixth best player and second-best general defender.

List of notable players to have hailed from the East Fremantle District.