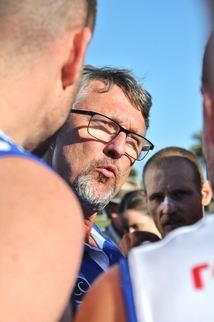 WHILE the East Fremantle Football Club has put out the call to help in their bid for survival, senior coach Bill Monaghan remains confident of the Sharks hitting the field still in 2020 and wants the WAFL to make their own decisions and not be led by the AFL.

When Monaghan talks, it's a voice that deserves to be listened to and often he thinks and looks at things well beyond what's directly in front of him with the bigger picture of the best interests of the WAFL competition in mind.

That's largely because of how big of a role in his life the WAFL has played. It was firstly during his 204-game playing career with both Subiaco and Peel Thunder before he went on to have a successful coaching apprenticeship under Peter German with the Lions.

He had to bide his time for his own senior coaching job, but when it eventuated at West Perth he made the most of it becoming a premiership coach in 2013, coaching Western Australia. By the time his tenure ended he was the all-time leader in games and wins with the Falcons.

Monaghan was far from done as a coach though. He took over as coach at East Fremantle in 2019, a tough job in its own right with the Sharks coming off a wooden spoon campaign in 2018, but there were definite signs of improvement.

There was then every reason to suggest further improvement from the Sharks in 2020 and Monaghan certainly was feeling good about the way the squad was shaping up during pre-season training.

But then COVID-19 struck and Monaghan hasn’t been able to see his players out on the paddock since and there remains no decision on whether the WAFL season will begin in 2020, if indeed it will at all.

However, Monaghan feels his East Fremantle team would be ready to play again this season provided they were given a date to work towards without too many problems.

But in the bigger picture, Monaghan has urged the WAFL to decide their future this season based on the best interests of the competition and WA football, and not allow themelsves to be guided by whatever ultimate decisions the AFL make.

"If the season is seven or eight weeks away, which would nearly be the best case scenario, I would think that just about all our players barring any further hiccups would be available when we do recommence," Monaghan said on 91.3 SportFM.

"I think what I wouldn’t like to see us do is say that we won't start until after the AFL if we have the opportunity to start before them.

"What I'd like to see is that whenever WA football at all levels is able to be played in WA, guided by government and medical officers, then we should pull the trigger and play.

"If that's before the AFL then great, if it's the same time or after then so be it but we shouldn’t rely on the AFL playing first.

When Coronavirus first struck in Australia and the social distancing measures were announced to attempt to help stop its spread Monaghan found himself feeling more and more doubtful over the ability of the WAFL competition to go ahead in any capacity in 2020.

However, with the spread in Australia now contained and the flattening of the curve in WA especially impressive, restrictions may soon be able to be relieved further having already started with the ability of gatherings of up to 10 people now allowed.

There has still yet to be a decision made on whether the WAFL season will go ahead in 2020 and in what form it might take, but Monaghan is now at least feeling more positive about the prospects.

"I think we've gone from being less likely to play, then there was a point it was probably 50-50 and my personal belief now is that there's more chance that we will play this season than we won't play," he said.

"But a lot of that is going to depend on whether there is a crowd and if there's revenue we can generate to cover our costs. That's our big challenge.

"The government relaxed the two-person rule to 10 and we're planning to start up some training on Monday in 10-people groups and we are just waiting on some clarification around what that training can look like, and the protocols in terms of hygiene which is ultra important.

"We think we've got some measures in place that will minimise any risk of contact so we think the 10-person thing won't be an issue. It's just about what football skills we're allowed to do or if they are only allowed to do running at the moment."

Given Monaghan had his East Fremantle players pretty much ready to go for the start of the 2020 before the COVID-19 restrictions were put in place and the competition was forced to be put on hold, it's been a period of time like nothing he, or any of us, have experienced before.

That's led to its own set of challenges of dealing with his playing group and keeping them motivated to remain training on their own in some capacity to retain their fitness levels while having no guarantees they were actually working towards a return to the field date for 2020.

However, Monaghan has sensed a boost in the morale of the players of late as the restrictions begin to be eased and by he and the coaching staff working closely with East Fremantle's leadership group, those players have then been in charge of passing on the messages to the rest of the squad.

"It's been a really difficult time to work through. The players had slogged it out over a hot summer and were ready to play, and then all of a sudden the rug was pulled from under our feet," Monaghan said.

"It's difficult to deal with and they are having problems with motivation, but there's a bit of light at the end of the tunnel and hopefully over the next couple of weeks we'll be able to get back into training. Hopefully we'll have a date soon as to whether we can recommence the season.

"With the leadership guys us coaches have continued to have a fair bit to do with, and using them to keep tabs on the other guys. But probably over the last week or so we've ramped it up a bit more.

"I'm probably on the side of a coach that until I can give them an end point, it's pretty hard to drive them. I probably treated the first four or five weeks a bit like you would in the off-season where you give them space, let them do what they can and they've had programs to follow.

"But you take it a fair bit on trust with the view that when we get told that the season will recommence we'll probably get a six or seven-week lead up. We think that the time we will be given will be enough time to get them in good shape because the majority of them are doing some work at the moment, some are doing lots and I'll be foolish to not realise some are doing very little."