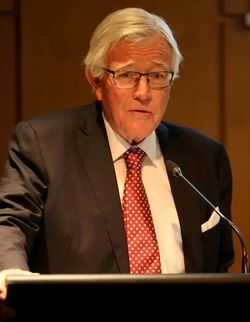 The West Australian Football Commission has issued deepest sympathies and sincere condolences to the family and friends of Terry O’Connor after receiving news that he had passed away aged 82 on the weekend.

Terry played an instrumental role in establishing the West Australian Football Commission to ensure the development and growth of WA football at the grassroots level.

He also served as West Coast Eagles Chairman from 1990 to 1992, an AFL Commissioner from 1993 to 2000, and was Chairperson of a taskforce established to further the development of football in NSW and the ACT.

Terry also had a proud history in football as a player, coach and administrator, which included playing more than 250 amateur games for University between 1958 and 1973.

In 1959 he was awarded a UWA Half Blue for his outstanding sporting achievement.

In his professional life Terry worked as a Barrister, was a QC and later Chairman of WA Anti-Corruption Commission.

He was also Chancellor of the University of Notre Dame Australia from 1990 to 2005.

On behalf of the WA Football family, the WAFC salutes Terry O’Connor and pays homage for his outstanding contribution to our great game. His legacy will endure through time.