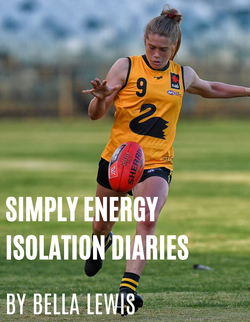 In a time of great uncertainty around the footballing world, we take you inside the lives of our Western Australian Under 18s as they navigate their way through an unprecedented 2020 season. The positives, the negatives and the new opportunities that present themselves will all be told in the ‘Simply Energy Isolation Diaries.’

Much like the current crop of WA U18s boys, the AFLW WA U18s girls are going through a similar ride of emotions as COVID-19 takes full effect across the country.

The AFLW season has already been brought to a close, while the WAFLW season, National Championships and 2020 AFLW Draft remain up in the air.

Despite the difficulties that the virus has thrown at women’s football, I have chosen to take a positive outlook and use the extra time to work on my game to the best of my ability.

It’s a long road ahead but still one that I can’t wait for….

Making the most of it.

Over the past fortnight while results and information has gotten more positive, no football and isolation has gotten easier. Initially, the shock of no season and potentially no draft was difficult because it all came quite quickly. There was a new story each day and things developed quickly.

My approach to life has been pretty simple; try and keep active while focusing on studying for school. I’ve made a schedule for each day, giving me a routine I can continually follow and giving a sense of normality to a different situation. It could be really easy to fall into bad habits, like eating or sleeping poorly. I’ve kept myself accountable in that area and tried to enjoy the extra time we’ve been given.

A normal day has consisted of early morning exercise – mainly a bike ride or run along the coast. Studying takes up a big part of my day before getting into our strength program in the afternoon. I’ve tried to fit in a visit to the beach as much as I can, socially distancing of course. Recovery has also been important, as I am keen to prevent injury during this time given we could play at any point.

Isolation has actually given me the ability to work on my footy even more than I normally would. We have more free time, meaning I can mix it up between touch and working on specific skills with a partner. It’s an opportunity that all the girls haven’t wasted.

For me, the prospect of a footy season is always at the back of your mind. We’ve been working since November in preparation for the 2020 season, and with a month until the original start of the WAFLW season, it’s all uncertain. I’ve just tried to keep things as normal as possible, because like everyone, if we think too much it overwhelms.

Despite this, there is a lot of nervousness and concerns from all the girls vying for a spot on AFLW lists in 2021. Shortening of lists or lower selections could easily affect the outcome of the draft. In a way though, it is a good thing. It will make a lot more athletes eager to improve and act as motivation during a tough time. It’s so far away – so there isn’t much we can do.

The girls in the State Academy and at Claremont have made a conscious effort to stay in touch throughout the pandemic. We’ve had a number of great skype calls, weekly challenges and Facebook groups to keep everyone in touch. It doesn’t always have to be about footy, it has just been good to speak regularly to friends.

The Skype interviews with different sporting icons has been great. We’ve had Justin Longmuir, Danny Green and Darren Glass speak to us, giving great advice during an uncertain time.

Senior players at Claremont have also been great to seek advice from. We have a number of girls that play AFLW and their message has been simple; keep your head up and keep working. It will all work itself out, but it is important to stay mentally and physically healthy.

Being in Year 12 has provided a really good distraction to the uncertainty that the virus has provided. Playing musical instruments keeps my mind refreshed and spending time with the family has been super enjoyable. Everyone is home due to the restrictions and we’ve been able to see more of each other than normal.

Hopefully we are back playing footy as soon as possible.