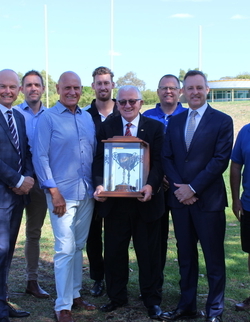 The West Australian Football Commission has thanked and acknowledged WAFL Council of Presidents Chairman Ric Gloede, following his resignation from the position after five years of outstanding service.

Mr Gloede has been a tremendous advocate for football in Western Australia over many years in key leadership roles, including President of South Fremantle Football Club for five years, WAFC Commissioner for eight years, and serving on the interim board that helped establish the Fremantle Dockers.

He was recognised for his excellent contribution with Life Membership at both South Fremantle and the WAFC, and has since played a vital role as independent Chairman of the WAFL Council of Presidents in guiding key decisions and creating stronger relationships between the WAFL Clubs, WAFC and other football stakeholders.

“His candour, reason and straight-talking, combined with great strength and resolve, has always been applied to serving the best interests of the game in our State,” WAFC Chairman Wayne Martin said.

“We express our most sincere gratitude for the extraordinary contribution Ric has made to our great game and to the community of Western Australia and wish him all the very best in his future professional and personal endeavours.”

Mr Gloede said he had thoroughly enjoyed his time in football and working with the WAFL clubs over the past five years in his role as Chairman.

“It has been a challenging and rewarding role and I’m grateful for the opportunity to have been involved,” he said.

“I’ve received great support from the WAFC and the WAFL clubs and we’ve had many robust discussions while tackling a wide range of issues.”

“I feel the timing is now right to step aside and allow the WAFL clubs to reassess all of their options for the future. I love the WAFL competition and want nothing more than to see it continue to thrive for many years to come.”

The WAFC will work together with the WAFL Clubs to discuss the appointment of a new Chairman of the Council of Presidents, as a highly valued and important leadership role for the competition.