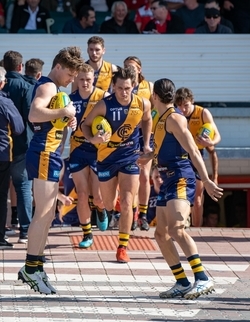 AFTER steady growth over his three years in charge as Claremont coach so far, Darren Harris is looking for the Tigers to take the next step in 2020 and he feels the whole group should be ready to challenge one another to do that.

Harris took over as coach at Claremont ahead of the 2017 season marking his return to a head coaching role in the WAFL for the first time since he left West Perth where he was a premiership captain and coach to begin life in the AFL firstly at West Coast and then Carlton.

But the pull was there to coach his own team once more and with the job at Claremont vacant with Michael Broadbridge stepping down, Harris put his hand up and was ready to set things up for sustained success.

The first season in 2017 started brilliantly winning the opening three games by an average of 52 points before then losing the next six matches. They again got on a roll winning three in-a-row before then ending the season losing six of the last eight games to finish up at 8-12.

It was an improvement on the previous season and then in 2018, despite a slow start losing five of the opening six games, Claremont got on an impressive role to end making the finals, beating East Perth in an elimination final and then going down to West Perth in the first semi-final.

To not only make finals but to win one meant it was a significant step forward from Claremont and then that growth continued in 2019.

The Tigers won their first three matches and at one stage would be 9-3 and remained in contention for a top two spot most of the way, before finishing third at 12-6.

Again they would win a final, defeating the West Coast Eagles in the first semi-final, either side of losing at Fremantle Oval to South Fremantle in the qualifying and preliminary finals.

But to be one win away from a Grand Final appearance meant that Claremont's growth continued under Harris for a third successive year.

Now heading into 2020, he sees no reason why that upward trajectory won't continue.

"As long as you continue to improve then you think you are going in the right direction. We've gone from seventh on the ladder where we missed the finals in the last game, and almost last kick of the season, and then we finished fourth and won a final," Harris told 91.3 SportFM.

"Then we finished third last year and won a final. So I reckon we're sort of heading in the right direction and every coach obviously wants to turn up and do the best they can straightaway, but I think to have something really sustainable I think you need to put the pieces together. I think we are definitely on the way with that."

Going back to the start of 2017 when Harris was coming into his first season in charge at Claremont, he was willing to back in taking a longer-term view to not chase short-term success but to set up a long-term set up which would be successful over a significant period.

You can't argue with the progress over his three seasons in charge so far and now while there have been some losses headed up with the retirement of Ian Richardson, the majority of the core group is back and has been added to by former Fremantle AFL defender, and Peel Thunder WAFL premiership player Ryan Nyhuis.

Harris sees the group on the back of two finals series where they have won at least once in September to now be in a position to be ready to challenge themselves to take the next step in 2020.

"For me it was about staying with a big picture and long-term focus when I started, and not get caught up too much on events along the way which are going to happen naturally," Harris said.

"I guess my first real goal was to build a really strong relationship with players and with each other, and our footy club so that if that was our foundation built on trust and how we treated each other respectfully, that would be the first part.

"From there it led to more performance-based things. I reckon we're in a position now where we can be much more demanding on each other, and expect greater things because of that foundation of the relationship that we have with each other."

Following the retirement of Richardson who had been Claremont captain and then shared the role last year, there is a new-look leadership team with the Tigers but Harris couldn’t be happier with the way the playing group voted.

Having been co-captain last year, Kane Mitchell will now be sole captain in 2020 with Anton Hamp and Declan Mountford vice-captains, and Haydn Busher and Ryan Lim rounding out a five-man leadership group.

But then with the likes of Tom Curren and Jye Bolton as emerging leaders too, Harris sees the leadership at Claremont as being in safe hands not only in 2020 but also into the future.

"Unanimously Kane Mitchell is our captain. I think he got 320 votes in the end and we'll have two vice-captains this year. They will be Anton Hamp and Declan Mountford," Harris said.

"Those three were the standouts in a leadership sense and then Ryan Lim and Haydn Busher weren’t far behind so they make up our five-man leadership group. The players settled on having those five guys so they do the vote and then talk about how they want the leadership group to look.

"There were some really good stories in there like Tom Curran who hasn't played for a year and-a-bit, but still got 50-odd votes so the conversation with him was just to let him focus on getting himself right before taking on some of the burden of leadership. But that was a great result.

"The other one was Jye Bolton who has gone from getting three or four votes in 2019 to 54 this year so that's a great story of his growth. It's pretty fluid and if he continues to go the way he has been going by helping other players, especially our graduating colts, he'll be one who I think will be added to our group down the track as well."