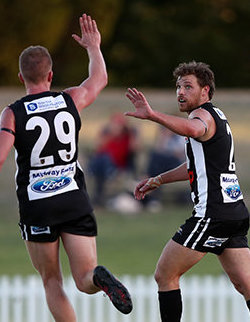 An Optus WAFL and WAFL Women’s double-header will be played at Hands Oval in Bunbury on Sunday, May 17.

The fixture has been made possible thanks to a partnership between the WA Football Commission, Optus, the City of Bunbury, South West Football League, Swan Districts Football Club, the West Coast Eagles, and Peel Thunder.

WAFC Executive Manager WAFL and Football Operations Scott Baker thanked everyone involved in making the fixture possible, as well as WAFL broadcast partners, the 7 Network, who will televise the WAFL game live.

“All of these stakeholders have united to take this fixture to the City of Bunbury, which is a great outcome for everyone involved,” Mr Baker said.

“The South West has been a terrific breeding ground for football talent over the years and it’s really important we continue rewarding this and encouraging growth and development in the area.”

“We hope that showcasing these games in Bunbury will encourage a new generation of local boys and girls to pick up a football and become the WAFL and WAFLW players of the future.”

“We know footy plays an important role in the local community. Optus is a supporter of sport in Bunbury through our digital scoreboards initiative, so it is pleasing to be a part of bringing this double header to Bunbury in May.”

“We’re delighted to have the opportunity to play a WAFL and WAFL Women’s double header home game in Bunbury this season,” he said.

“Many great players from our Bunbury zone have had illustrious football careers with Swans including Sandover Medallists Phil Narkle and Mick Grasso and also Leon Baker, Keith Narkle and Peter Old, to name a few.”

City of Bunbury Deputy Mayor Jaysen Miguel said the regional fixture was set to be an exciting event for the community and local football clubs.

“The West Australian Football Commission sees Bunbury as a suitable location for a regional fixture – that alone is a big win for our wonderful City and our sporting clubs,” Deputy Mayor Miguel said.

“A WAFL and WAFLW double header at Hands Oval, which is in exceptional playing condition, will be a major drawcard to get visitors to Bunbury while also providing yet another great sporting event for our local community.”

The City’s contribution to the event will help see the game broadcast to a large TV audience, helping to promote Bunbury as a tourism destination.