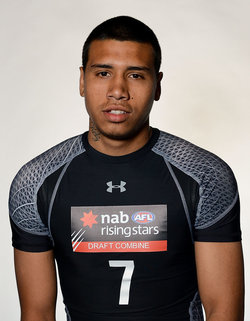 Western Australia has an excellent history of producing Indigenous Australian footballers who have excelled at the highest levels.=

West Australians such as Barry Cable, Bill Dempsey, Graham “Polly” Farmer, Syd Jackson, Jim Krakouer, Chris Lewis, Peter Matera, Stephen Michael, Maurice Rioli, and Nicky Winmar are considered to be some of the greatest players to ever play the game.

Since 2000, Western Australia has produced over seventy Indigenous footballers who have been drafted onto an AFL list. Many of these players are considered to be amongst the best players to be playing in the current AFL environment.

Below are some of the notable Indigenous AFL footballers who have hailed from Western Australia and have been drafted onto an AFL list since 2000 (alphabetical order).

Since starting his football career in Dowerin (approximately 150 kilometres north-east of Perth), the man affectionately known as “Buddy” has gone on to become arguably one of the greatest Indigenous AFL footballers in the modern era. He was the seventh Indigenous player to reach 300 AFL games, and is the highest goalkicker of any Indigenous player to play in the AFL. He looks to become just the sixth player in VFL/AFL history to kick over 1000 goals. As a player Buddy is renowned for his freakish athleticism, his dare to take the game on and his powerful and penetrating kicking skills. He is also the last player to kick over 100 goals in an AFL season (2008).

Since being drafted with pick 33 in the 2011 National Draft, Hill has gone on to become one of the best wingmen in the AFL. Before the age of 23, he had won three premierships in four years with the Hawthorn Football Club before he was traded to Fremantle. He became the first player since Troy Cook to win Fremantle’s Best & Fairest in his first season at the Dockers (2017). As a wingman, Hill has an elite running ability, dazzling skills and an excellent work rate. In his 149-game career so far, Hill currently averaged 20 possessions (16 uncontested), 4 marks, 4 inside 50s, 2 rebounding 50s and 2 tackles.

The older brother of Brad, Stephen is a smooth-moving and silky skilled outside midfielder who has put together an impressive career with the Dockers so far. As a wingman, Hill is quick, skilful, and smart – traits that make him one of the most dangerous outside midfielders in the game. He has currently played the eighth most games (206) by any Fremantle player in the Dockers’ history and by the end of his career could be one of only four Dockers to play over 250 AFL games. In 206 games, he is currently averaging 20 possessions (12 uncontested), 4 inside 50s, 3 marks, 3 tackles and 3 clearances.

A current Assistant Coach with the WA U18s State Academy, McGrath put together an impressive AFL career since being taken with pick #13 in the 2000 AFL Draft. Within his first three seasons of AFL football, he was a member of Brisbane’s 2001 QAFL Premiership team and a member of the Lions’ 2003 AFL Premiership team. He was a versatile player who could play in defence, up forward and even on the wing, often using his speed, skill, smarts and creativeness to carve up the opposition. He played the sixth most games (214) by a Brisbane Lion and kicked the tenth most goals (170) by a Lion in the Brisbane Lions’ history.

A graduate from the Clontarf Football Academy, Johnson was one of the best general defenders in the AFL. He read the play well to intercept the opposition’s attacking entries, and due to his penetrating skills and smart decision-making he provided damaging rebound for Fremantle. In just his second season of AFL football, he finished second in Fremantle’s Best & Fairest. He played the equal fourth-most games (alongside Luke McPharlin) for Fremantle (244). Over his career, he averaged 17 possessions (11 uncontested), 6 marks, and 3 rebounding 50s.

After a 93-game career with South Fremantle in the WAFL, Kelly was drafted as a mature-age prospect in 2017 by the Geelong Cats. Since entering the AFL, Kelly has gone on to become one of the premier midfielders of the competition. In his first two seasons of AFL football, Kelly already has two top-ten Brownlow placings, two runner-up placings in his Club’s Best & Fairest, an All-Australian jumper, a  AFLCA Best Young Player Award and an AFLPA Best First Year Player Award. He was traded to the West Coast Eagles during the 2019 AFL Trade period.

A great story of redemption, Krakouer found his way back onto an AFL list despite having spent time in jail for assault. He signed to play WAFL football for Swan Districts after he was released from prison and had an individual fairytale season for the Swans in 2010. He won the Sandover Medal, the Simpson Medal, his Club’s Best & Fairest, made the Team of the Year and helped the Swans win the Premiership. In October 2010, Collingwood signed Krakouer. In 35 games for the Pies he booted 50 goals and averaged 14 possessions, 3 marks, 3 tackles and 3 inside 50s. His Richmond Coach, the late Danny Frawley, said he was the player most likely to win a Brownlow Medal “if football was played in a phonebox.”

The son of former East Fremantle player Revis Ryder, Paddy has long been considered a top-10 ruckman in the AFL. His combination of speed, agility and his vertical leap make him a difficult match-up for other ruckman to handle. His ability to push forward and become a threat makes him one of the more explosive and dynamic rucks in the competition. In his 243 game career so far, Ryder has averaged 12 possessions (7 contested), 19 hit-outs, 4 marks, 3 tackles, and 2 clearances. He will become just the fourteenth Indigenous footballer to reach 250 AFL games next season.

The former Midvale Junior turned his career around after he was banished from Fremantle in 2012 after he was found to be overweight and not up to the fitness standards of AFL football. Since then, he has become a top-five midfielder-forward in the AFL. He has booted the second most goals (261) in Fremantle’s history and by the end of next year will have played 12th most AFL games by a Docker. In his 151-game career so far, he has averaged 17 possessions (7 contested), 4 marks, 3 inside 50s, 3 tackles, and 2 clearances.

The 2002 number two draft pick put together an exceptional career for both North Melbourne and Collingwood. Prior to being drafted, Wells finished second in the Sandover Medal, despite playing just 14 games, at just the age of 17. His blistering speed and damaging disposal made him a dangerous line-breaking midfielder throughout his career. Throughout his 258-game career, Wells averaged 19 possessions, 4 inside 50s, 4 marks, 3 clearances and 3 tackles.