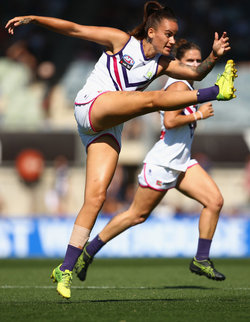 The 2020 NAB AFL Women’s Competition will kick off on Friday, February 7 in a blockbuster match between Richmond and Carlton at Ikon Park.

The eight-week home and away season will be followed by a three-week finals series, with the NAB AFLW Grand Final scheduled to be played on Saturday April 18.

Four new AFLW teams will debut in 2020; Gold Coast Suns, St Kilda, Richmond and the West Coast Eagles, while matches will be played at 28 different venues throughout the country.

•    First West Australian AFLW Derby between Fremantle and West Coast to be played at Optus Stadium in Round Two on Saturday, February 15

Teams were placed in conferences using 2019 final finishing positions.  A snaking allocation has been applied – this method creates the most even balance of wins from the previous season across conferences.

Teams play all other teams in their own conference and two teams from the opposite conference.

The top three teams in each conference will play in a three-week finals series with the addition of two Semi Finals.

The top team in each conference will have a bye in the first week of finals.

The highest ranked teams will host finals matches based on finishing order in the home and away season, with the NAB AFLW Grand Final scheduled to be Saturday April 18.

AFL Head of Women’s Football Nicole Livingstone said the fixture includes many new highlights as we welcome four new teams to the competition.

“There is so much to look forward to with rivalries been continued and established as we play AFLW matches throughout the country.

“I would like to acknowledge NAB for being our naming rights partner and for providing outstanding support for all levels of women’s football.”

All 2020 NAB AFLW Competition matches will again be broadcast live on the Seven Network and on Fox Sports. Matches will be streamed live via womens.afl and the AFLW Official App.

NAB has supported the footy community since 2002, providing boys and girls with a clear pathway from NAB AFL Auskick through to the NAB AFL Rising Stars Program all the way to the big time. In the fourth year as principal partner of the AFLW, NAB is proud to once again be supporting the competition in 2020, providing many women the opportunity of playing at the elite level and many girls across the country with something to aspire to.