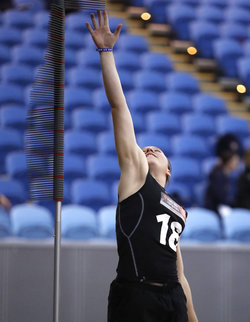 The curtain has closed on the 2019 AFLW National Draft Combine with three Western Australian participants showing off their skills to both West Coast and Fremantle in Melbourne this week.

Roxanne Roux, Mim Strom and Emma O’Driscoll all travelled East to take part in a series of physical tests as well as interviews with the WA clubs ahead of the October 22nd AFLW National Draft.

The first day of the combine was on Tuesday, seeing all three girls partake in 15-minute interviews with clubs, before moving into media commitments during the afternoon.

Physical testing took place on Wednesday based around the Yo-Yo, sprinting, jumping and the 2km time trial. Due to injury, Emma O’Driscoll couldn’t participate in the physical side of the combine.

Roux and Strom were standouts in the Yo-Yo testing, finishing in the top 30% of players with 16.4 & 16.1 respectively.

Roux, an East Fremantle product, then finished second overall in the 20m sprint with a time of 3.26 seconds. Strom was equally as impressive as a ruck, finishing with 3.33 seconds.

The premiership-winning forward was also impressive in the standing vertical jump as well.

All three women will return to Perth tomorrow, continuing to train ahead of the October 22 AFLW National Draft Combine.

WA are likely to have a number of girls taken in the draft with U18s player Sophie McDonald taken by the West Coast Eagles earlier this week.