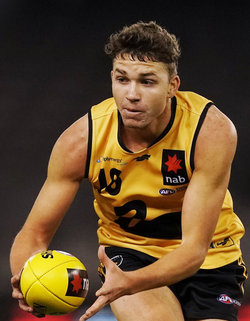 In the past three seasons a host of young players have made the daunting move from country WA to Perth in pursuit of their dream to play AFL.

East Fremantle’s Jai Jackson is shaping up to be a potential solid inside midfield prospect in this year’s AFL Draft.

Originally from Geraldton, Jackson made the move to Perth last year in order to try and achieve his own dream of playing AFL football.

“It was a little bit different at the start. Obviously going from a pretty small town to Perth is a pretty big jump. It took me about six months to fully settle in but after that, playing footy and doing what I like doing, and also made a few new mates, and stuff like that helped a lot,” he said.

And the move has paid dividends for Jackson. He was one of three county WA players, out of a total of sixteen, to be nominated to the NAB AFL Draft Combine.

“I was a little bit shocked actually, I wasn’t expecting it [to receive an invitation]. It’s a pretty surreal feeling I suppose. You always dream of this as a kid and yeah I’m pretty excited to attend the National Combine,” he said.

Jackson, along with the sixteen other nominated players has been doing specialised training with the WA State Academy for the upcoming Combine, but has also shown extra dedication for the event.

“Also in my spare time I’m just doing the extra things like going to the gym, a bit of extra running in my own time. Just giving myself that better opportunity to hopefully do well in the Combine,” he said.

But Jackson has shown a lot of dedication to his football even before the commencement of this season, claiming a big pre-season was behind his success in 2019.

“Obviously building up into this season, I thought I had to put in a few extra yards coming into pre-season. I’ve never actually had a proper pre-season due to obviously growing up in the country, they don’t really take it as serious I suppose,” he said.

He credited East Fremantle’s Head Coach Jacob Brennan as having a great influence on him, and in particular his player development and professionalism.

“He’s [Brennan] just real easy to understand and doesn’t always come across as a coach, comes across as a mate as well which is always a benefit,” Jackson said. “Even with the reviews and stuff like that, he’s always been giving it that little bit extra. He’s told me I should’ve done this, or I should’ve done that which I obviously didn’t have back home which is good to have.

Because of his strong performances for East Fremantle, Jackson was one of eleven players from the Sharks to make the WA State U18s Squad – an experience he described as “great”.

“It was a great achievement [to make the squad]. Definetly a lot of hard work put in … That was probably my biggest focus was seeing how far I could push myself to try and make that squad, which when I did was a pretty good relief,” he said.

In three games for the Sandgropers, Jackson kicked three goals and averaged 14 possessions (seven contested), five tackles and three marks with his most notable performance coming against the Allies (15 possessions – nine contested – five tackles, three clearances and a goal).

He also credited Forwards Coach Garry Moss, and Head Coach Peter Sumich as having an influence on his football.

“I was mainly coached by Mossy, he was the forward line coach though, but obviously Suma, being Head Coach and the way he goes about things and the professionalism of him and also him always pushing you to do your best and try your best so yeah between those two,” he said.

The talented youngster has been likened to Richmond’s Josh Caddy – both are inside ball-winning midfielders who attack both the man and the ball with vigour. However, Jackson bases himself on three Eagles players.

“I suppose it’s hard to compare yourself to just one player. I like to take snippets off a few players, so I’m obviously an Eagles supporter so I like to take a little bit of Yeo’s game out of it and also Jamie Cripps and also even a bit of Shuey. I like to take snippets out of them three players’ games for sure… Yeo, definitely his pressure around the ground, he’s a great tackler and stuff like that. Shuey, he’s a ball winner who likes to get the ball out of the stoppages, obviously feed to players like Gaff and players like that. And then you’ve got Crippa who can play up the ground and can also get forward and doesn’t mind a cheeky goal every so often.,” he said.

Jackson is also seen as a respected leader amongst his peers, being a member of the Leadership Group at East Fremantle.

“I just like to bond with the boys. I don’t like to be too negative and stuff like that, I’d rather talk to them as mates and just bonding really other than coming across as a leader saying ‘you should do this, should do that’ and being hard where that’s like the Captain’s role. I’m just there to bond with the boys and tell the Captain what everyone’s thinking,” he said.

It is clear that Jackson has the tools to become a good footballer at senior level, adding to the growing list of talent from WA’s country regions. He is shaping up to be a good and effective inside midfield prospect who has the capability to play forward and become a threat.