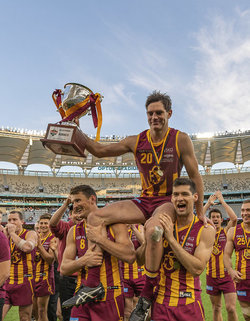 Five different clubs were represented across the three Grand Finals, with 18,941 fans attending Optus Stadium to enjoy the day, culminating in family kick-to-kick on the hallowed turf.

WAFC CEO Gavin Taylor congratulated all of the 2019 Premiers on their Grand Final performances.

“Well done to West Perth and Claremont on their Reserves and Colts Premierships, as well as Subiaco on another outstanding performance throughout the 2019 WAFL season,” he said.

“Subiaco’s display in the League Grand Final was very impressive and demonstrated again what a strong winning culture the club has developed.”

“I congratulate them on continuing to raise the bar and set the standard for all other teams in the WAFL competition to aspire to, both on and off the field.”

“It is important that the West Australian Football Commission continues to review how it can assist the other WAFL clubs to achieve the same heights and ensure that we don’t have clubs remaining out of contention to play finals for extended periods.”

“We want every club to have the opportunity to play finals and win a premiership and will continue exploring equalization measures to ensure we have a tight, competitive and exciting WAFL competition every season.”

“A close and exciting competition is absolutely vital to the ongoing success of the WAFL and its ability to attract and retain new fans, members, supporters and sponsors.”

The WAFC Football Affairs Committee will meet in the coming weeks as part of its annual review of the WAFL competition, to discuss equalization measures that may be considered and reassessed, including adjustments to the salary cap, total player points system and recruiting rules, to achieve a closer competition from the top to the bottom of the ladder.