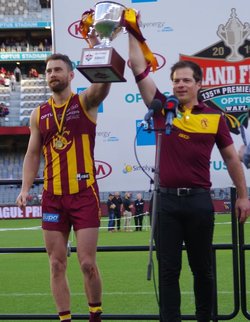 SUBIACO has further stamped itself as the WAFL powerhouse with a remarkably dominant 96-point Grand Final triumph over a South Fremantle team that had appeared ready to put up a significant challenge in the lead up.

South Fremantle had finished in second spot in each of the past four WAFL seasons and finally won through to a Grand Final and all signs were the Bulldogs would be able to give Subiaco a real fight on Sunday at Optus Stadium.

But aside from the opening 10 minutes of the game, that wasn’t the case and Subiaco showed its remarkable quality to go on a run of kicking 11 unanswered goals between South Fremantle's first and second of the afternoon.

It's a fourth premiership in six years for Subiaco and an eighth in the past 16 years to now have 15 flags to the club's credit in history.

Since the pain of losing a second straight Grand Final to Peel Thunder in 2017, Subiaco has now remarkably won 38 of 39 matches. And going back further since losing to South Fremantle in Round 1 of 2017 the Lions have won 58 of 61 games.

It will be a bitter loss to swallow for South Fremantle but the Bulldogs can be proud of advancing to the Grand Final in 2019 given the player turnover they had from 12 months ago and given 20 of the 22 were playing on the stage for the first time.

The victory gives Subiaco back-to-back premierships in their sixth straight Grand Final appearance. They also won flags in 2014 and 2015 before the two losses to Peel Thunder and suddenly four out of six sounds a lot better than the Lions felt after losing the second to Peel in 2017.

Going back further, Subiaco has dominated this century having played in 13 of the 20 Grand Finals for eight premierships.

As for players, Kyal Horsley added to his legend with a fifth premiership and he must have gone close to another Simpson Medal after 30 possessions, 11 tackles and a goal just days after a fifth top-two finish in the Sandover Medal.

The man who won that Sandover Medal on Monday, Lachlan Delahunty, produced another brilliant display in the ruck with 27 possessions, 29 hit outs, five tackles and two goals. It was his fourth premiership with Subiaco.

But the man that did claim the Simpson Medal did so deservedly and it just happened to add extra salt into the wounds of South Fremantle.

Ex-Bulldog Ben Sokol backed up his Bernie Naylor Medal season by kicking six goals from 12 kicks and eight marks to enhance his AFL prospects as he celebrated a second flag.

First-year captain Leigh Kitchin became a triple WAFL premiership player as well and had 19 disposals, nine tackles and a goal.

Clancy Wheeler earned his spot back in the Subiaco team for the Grand Final and now is a four-time premiership player as a result as he moves into retirement.

Defenders Hayden Kennedy, Jordan Lockyer and Aaron Heal all became triple premiership players and were rock solid down back even if the ball didn’t come down a lot. Lockyer was especially important holding Mason Shaw to five kicks and one behind.

Braut produced a tremendous performance made up of 23 possessions and 10 marks while Newton finished with 25 touches, seven inside 50s and a goal, Walters 20 disposals, six tackles and five marks, and Clark 18 possessions, six marks and six tackles.

Marsh spent most of his season in defence for Subiaco but went forward in recent weeks and continued that in the Grand Final to kick three goals.

South Fremantle was the only side to beat Subiaco since the 2017 Grand Final and the Bulldogs had an experienced group to raise their hopes of taking it up to the Lions, and the first 10 minutes saw signs that could come to fruition.

There were few highlights for South Fremantle but Nick Suban and Dylan Main collected 20 possessions apiece, Steve Verrier had 19 touches and seven tackles, and Jake Florenca 18 disposals and eight tackles.

Brock Higgins couldn’t have fought harder in the ruck and finished with 13 possessions, four tackles and 51 hit outs.

Adam McIntosh and Shaun Bewick both gave their all in what will be the last games of their WAFL career that have last 116 and 154 games respectively.

Subiaco kicked the game's first goal thanks to Harry Marsh but then South Fremantle retiree Shaun Bewick responded in the 154th and final game of his WAFL career.

That would be as good as the Grand Final got for the Bulldogs. Subiaco closed the first quarter with goals to Clancy Wheeler, Ben Sokol and Ben Newton as they held a 20-point advantage at quarter-time.

Any hope of South Fremantle regrouping at the break was quickly put to bed with a goal early in the second term to Sandover Medallist Lachlan Delahunty. Sokol then added a second and Simon Moore another to make it a 41-point ball game.

Justin Joyce delivered another and so did Thomas Edwards-Baldwin just before half-time with Subiaco going into the long break 53 points to the good and having held South Fremantle to a point in the second term.

There would be no let up from the Lions as Sokol kicked his third of the afternoon against his former team after just a minute of the second half.

Delahunty's remarkable work rate and running ability for a man his size was rewarded with a mark in the forward pocket and a brilliant snap for a goal as his hapless opponent Brock Higgins looked on in exhaustion.

Horsley then kicked a beauty for Subiaco to make the margin 70 points before South Fremantle finally got its second goal of the afternoon more than two full quarters after the first.

Haiden Schloithe kicked it but Sokol added his fourth before three quarter-time and it was a 68-point margin at the last change.

Sokol added a fifth to open the last quarter before Marsh kicked his second and then captain Leigh Kitchin pinched a beauty from a throw-up in the goal square.

A 100-point margin was on the cards when Sokol booted his sixth but Kade Stewart did at least kick a third for South Fremantle to avoid that.

Marsh still kicked the last goal of the Grand Final as Subiaco romped to the 96-point triumph. 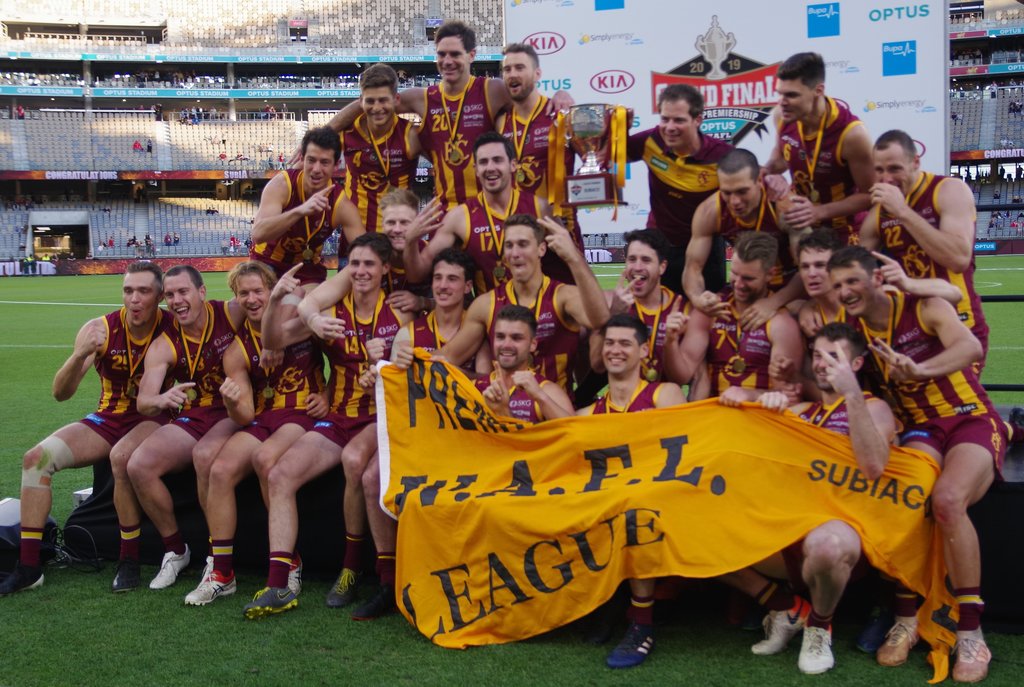