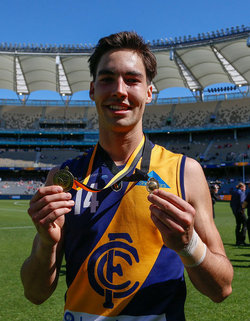 Playing as the centreman for the Tigers, Cooley was enormous with 33 possessions (18 contested), 14 clearances, seven tackles, seven inside 50s and five marks, helping the Tigers defeat Peel by five points to win their fourth WAFL Colts Premiership this decade.

“Honestly I don’t think it will settle in for a few days [winning the premiership], but the vibe around the Club has been good all year. It’s just unreal at the moment,” he said.

Despite the game having such high stakes, Cooley was exceptionally calm throughout the game and was pretty relaxed even before the first bounce.

“I just stayed relaxed, didn’t really think about the game too much. I just kept everything simple, listened to music, stayed hydrated and then went out and played my footy,” he said.

He was brutal in the midfield often throwing his body on the line, desperately trying to win the contested ball and clearances for his team, but also trying to nullify one of Peel’s strengths.

He was full of praise for Claremont’s hero, Leno Thomas, who produced the game-saving smother in the final few moments.

“Honestly, Leno Thomas, he won us the game. I remember running over to him and there was about ten seconds to go. I told him ‘you’ve won us the game because that was just so selfless and that could’ve well and truly gone through,” he said.