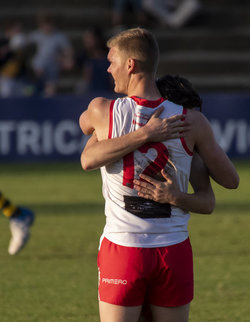 CHAD Pearson has never looked back having cemented a spot in South Fremantle's back-line at the start of 2018 and while his future is remarkably bright, all he is focused on is experiencing a dream come true by playing in Sunday's WAFL Grand Final.

Pearson always looked as though one day he would become a regular league player with South Fremantle when he was playing impressive colts football in 2015 and 2016, and then with the way he adapted well to reserves football in 2017.

He even managed six league appearances in 2017 and did well with those opportunities but the reality was it was a strong and experienced South Fremantle group at the time so he lost his spot for the finals and went on to play in the last ever reserves Grand Final at Subiaco Oval.

Pearson had done enough to suggest he was still a player of the future but he made sure there would be no more waiting with a strong pre-season heading into 2018 and then once the season he got underway, he performed so well as part of the defensive unit that he locked in his spot.

He would play every game of 2018 while doing good jobs defensively and also proving a more than capable player to take intercept marks and then set up play going the other. He averaged 14.9 possessions and 5.3 marks a game.

Now Pearson has taken his game up another level further in 2019 with the now 21-year-old having such a standout season he was named to the WAFL Team of the Year and is now right in discussions to be drafted into the AFL later in the year.

Pearson's numbers have gone through the roof rising to 18.1 disposals a game along with 4.3 marks while taking on some strong defensive roles for the team but even more impressive is his composure and skill with ball in hand, and to provide some run for someone who stands 193cm.

Pearson now will have another significant role to play in Sunday's WAFL Grand Final against Subiaco at Optus Stadium. He now can barely contain his excitement about what lies ahead.

"I was pretty excited the moment we won the prelim to be honest and I've been there a couple of times to watch games of footy, and just taking in the size of it and know I'll play on it now on Sunday and to do it in a WAFL Grand Final is going to be unreal," Pearson said.

"It's a dream come true really to be able to play in a Grand Final especially to do it at Optus Stadium. That makes it a whole better and it will be an unreal experience that I'll never forget.

"To get the chance to play in a WAFL Grand Final with it only being my third year in the league team makes me feel pretty lucky I guess in a way, but it's something I'm very much looking forward to."

Understandably Pearson is happy with the way he has been able to continue his own personal growth and improvement this season as a part of South Fremantle's back-line where he's proven he can play both tall and small, and be an attacking and creative threat too.

"I've been really happy with the way my footy has gone this year. Obviously building on last year, it's just about having the confidence from being able to play every game last year and knowing my body held up pretty well," he said.

"It was then a big focus to have a big pre-season to give it my best shot this year and it's been great that the team has been able to perform really well which definitely helps me do my job down back. When the mids and forwards are on fire, it helps all of us down back and it's been a great season."

Going back to 2017 when he first played senior football and Pearson feels the chance to learn and develop alongside the likes of Josh Pullman and Chris Luff was invaluable, and then at league level having Blayne Wilson alongside him has been a tremendous blessing.

And to now have locked down a spot over the past two seasons with Noah Strom as the two cornerstones of the back-line has become one of the great strengths of the South Fremantle team.

"In that first year I played some league games we had Josh Pullman and Chris Luff in the back-line who were great for me to learn off when I was coming through in the reserves," Pearson said.

"Then as I matured a bit more in my body and put on a bit of weight that's helped me last year and now definitely even more this year play league footy.

"Just being able to bide my time in the reserves and being able to learn off guys like that and now Blayne Wilson has been a massive one for me to learn from. To get my opportunity I kind of knew that I would have to do my best early to try and cement my spot.

"To play every game since, my body has held up and I keep getting more confidence each week and I'm just trying to play my role for the team. Hopefully that does enough."

While South Fremantle's midfield led by Haiden Schloithe, Jacob Dragovich, Steve Verrier and Jake Florenca along with ruckman Brock Higgins, and then the forward-line of Mason Shaw, Dylan Main and Zac Strom attract plenty of attention, the Bulldogs' back-line remains a tremendous strength.

With Strom and Pearson having now cemented themselves as quality players over the past 42 games with Nick Suban having come in the past two years and joining Blayne Wilson and Jason Maskos with Zac Dent now a key part of that as well, Pearson couldn’t be happier with the group they have.

"It has been great and we try to make our back-line a team within the team. We've pretty much had the same seven or eight players for the most part over the last two years in the back-line so we are all pretty close down there," he said.

"We're all really good mates and just being able to play with each other week in, week out has been great. We've built a pretty good chemistry down there and we've been able to understand what each other is like, and how we can help each other out.

"It's been great to be able to keep that group together which has really helped us in the end."

Pearson was playing in his second preliminary final last Sunday when South Fremantle took on Subiaco while the Bulldogs were in their fourth in-a-row and had the hoodoo to overcome of having lost the previous three.

But Pearson had also played in the losing reserves Grand Final of 2017 as well so he had a couple of years of finals heartbreak to call back on as added motivation, and once he realised the Bulldogs were on their way to beating the Tigers his excitement for what was to come instantly grew.

"It was a great feeling on Sunday and a bit of a relief probably halfway through that fourth quarter just starting to think that we might actually win this and get through to the Grand Final after the tough finishes the last couple of years," Pearson said.

"Since then it's just been an excited feeling within the group and we are all just looking forward to Sunday. It has been a bit of a long week just thinking a lot about the game, but it's exciting knowing we're about to play in the Grand Final."

As much as anyone can say they try to keep Grand Final week the same as any other week and treat it just like any other game, the fact is that is only ever a smokescreen.

Pearson is more than happy to admit to how excited he is to be preparing to play on Optus Stadium for the first time in his first league Grand Final which will also be the case for 20 of his teammates.

"You do try and keep it the same as any other week, but it obviously is very different and you can't shy away from that," Pearson said.

"You are always thinking about the game throughout the week but then once we get to Sunday, it will be important to keep things as normal as we can and we'll have to try to not get overwhelmed by the occasion.

"Then especially being at Optus in such a big stadium, it's going to be a great experience but we have to keep our preparation as simple as we can, stick to our routine and hopefully don't get overwhelmed by the occasion."

Only Nick Suban and Blayne Wilson have played in WAFL Grand Finals previously with Suban the only premiership player having won in 2012 with Claremont, and 2016 and 2017 with Peel Thunder.

Pearson isn’t sure how South Fremantle's inexperience on Grand Final day will end up being a factor up against a Subiaco team playing in its sixth consecutive premiership decider, but he's looking forward to finding out.

"In a way that inexperience and youth that we've got could work in our favour and it could give us that belief that we can do it on our first attempt given no one has really been there before in this position, or most of us haven’t," he said.

"We're really excited about the opportunity and we just want to go out there and have as much fun as we can, play the best we can and hope for the best.

"It's just Blayne Wilson and Nick Suban that have been there before and they'll give us a few hints and share their ideas of what we can expect in a Grand Final, but other than that Todd is just backing us in to go out there and have fun, and play our trademark which should get us over the line in the end."

Training this week at South Fremantle has also been upbeat not only because of the 21 players that will likely back up from the preliminary final to play in the Grand Final, but because of the one spot available due to the devastating ACL knee injury to Josh Collard.

South Fremantle's coaches have a big decision to make to go with the experience of Adam McIntosh, the youth of Seaton Thompson, Tom Blechynden or Daniel Cabassi, or the added size of Blair Della Franca.

Florenca sure doesn’t envy those making that decision but will back in all his 21 teammates he runs out onto Optus Stadium with.

"Training has been great over the whole finals series and all the blokes who have stayed on to keep training with the main group have been great, and they have been giving their all trying to put their hands up for selection," Pearson said.

"Now this week we've got a spot that's opened up and a few of those guys have been training even harder to do their best to try and get selected.

"It's going to be tough because there are five or six options for the coaches to choose and any one of them could slot straight into the team because they've been training hard and have had their running programs over the weekends while we've been playing.

"We'll back any one of them in to come in and play their role, and do well."