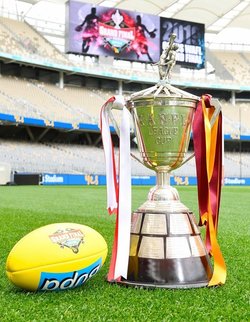 YOU could say it is the WAFL Grand Final four years in the making and now after being the top two teams for four seasons straight, Subiaco and South Fremantle get to meet to decide the 2019 premiership this Sunday at Optus Stadium.

In each of the past four WAFL seasons Subiaco has finished on top of the ladder at the end of the home and away season with South Fremantle in second place, but now in 2019 it's the first time they have both capitalised on those positions to end up in a Grand Final.

Subiaco has gone further than that and taken out the minor premiership for five straight seasons now and the Lions are embarking on a sixth successive Grand Final appearance and looking to add to the premierships of 2014, 2015 and 2018 that they have won along that dominant stretch.

South Fremantle, meanwhile, had bowed out in the previous three preliminary finals against Peel Thunder in 2016, Subiaco in 2017 and West Perth in 2018, but overcame that hoodoo last Sunday beating Claremont to book a spot in Sunday's Grand Final at Optus Stadium.

Given the teams have appeared destined to play in a Grand Final for four years now, it feels like it's the premiership decider that these two clubs needed to have and it all takes place this Sunday afternoon with bounce down set for 2.40pm.

While Sunday's Grand Final will be the first time Subiaco and South Fremantle have met since the Bulldogs beat the Lions for the 2009 premiership, they are no stranger to doing battle in finals in one another since then.

Their first meeting after the 2009 Grand Final came two years later when Subiaco thrashed South Fremantle in the first semi-final by 85 points ending an era for the Bulldogs under dual premiership coach John Dimmer.

It would then be five years until another finals meeting and that came in the second semi-final of 2016 with Subiaco winning by 40 points at Leederville Oval, which has been the venue for the proceeding three finals as well.

It was a preliminary final match up in 2017 with the Lions prevailing by 32 points and then despite the Bulldogs getting off to a flying start in last year's second semi-final, Subiaco fought back to win by 18 points.

Then in the second semi-final of this year, it was a tight contest for the most part but Subiaco kicked six goals in the space of 12 minutes late in the third quarter to end up beating South Fremantle 14.13 (97) to 10.3 (63).

Subiaco has won the last five finals against South Fremantle by an average of 41.8 points with the Bulldogs' last win 10 years ago in 2009 Grand Final.

Then during the home and away season, Subiaco has only lost one game in total since the 2017 Grand Final but that did happen to be against South Fremantle back in Round 6 of this season.

However, outside of that the Lions have won seven of the past eight matches with the Bulldogs and 13 of the previous 15.

Both teams have named squads of 26 at this stage and each coach has some difficult selection decisions to make before their teams run out on Sunday afternoon.

From the Subiaco team that beat South Fremantle in the second semi-final, Ryan Borchet, Braden Fimmano, Kaiden Fullgrabe and Clancy Wheeler have been added to the current 26-man squad.

Borchet missed that game through suspension and given he's kicked 42 goals in 2019 and 11 in the three weeks before that, he looks a lock to come back in.

The biggest dilemma left for coach Beau Wardman and his coaching staff will likely be over triple premiership veteran Wheeler and youngster Jakob Atkinson given there's really only room for one to split their time playing up forward and helping Lachlan Delahunty in the ruck.

South Fremantle has one forced change to make with Josh Collard having ruptured his ACL last Sunday in the preliminary final against Claremont.

Seaton Thompson, Daniel Cabassi and Adam McIntosh all come into calculations to replace him while South Fremantle could also opt to go big and add another tall by calling up Blair Della Franca.

In terms of premiership experience on either side, 19 of the 26-man Subiaco squad have played in at least one premiership and if selected, only Tom Edwards-Baldwin, Jakob Atkinson, Jack Beverley, Ryan Borchet and Harry Marsh would play in the first Grand Final.

Kyal Horsley, on the other hand, is attempting to collect a fifth premiership medal with Lachlan Delahunty and Clancy Wheeler going for a fourth. Leigh Kitchin, Hayden Kennedy, Jordan Lockyer, Rhys Waters and Aaron Heal are all attempting to win a third flag with the Lions.

Meanwhile for South Fremantle, the Bulldogs squad has won a total of three premiership in the WAFL between them and all of those are by Nick Suban. He won one with Claremont in 2012 and then two at Peel Thunder in 2016 and 2017.

Only Blayne Wilson has played in a Grand Final as well having played in East Perth's losing efforts of 2013 and 2014.

Highlighting the quality of both teams also is the fact that in the final 25 named for the WAFL Team of the Year, 10 of those come from these two sides.

Over the course of the season, it's no surprise that Subiaco dominated most areas as they lost just one game and now enter the Grand Final on a 13-match winning streak.

Subiaco was the best attacking team (94.4 points a game) and best defensive team (50.6 points) in the competition. South Fremantle ranked second in attack at 86.4 points scored and third defensively giving up 67.3.

The Lions finished up winning more possessions across the WAFL in 2019 as well averaging 346.4 a game while South Fremantle ranked fifth with 336.0 per match.

The Lions were second best in opposition possessions gathered with 308.4 a game while the Bulldogs were ranked third allowing just 314.2 by their opponents.

Subiaco was by far the highest scoring first quarter team this season averaging 25 points a game while they were first in scoring for second quarters as well, on fourth in third terms and then by far the best final stanzas with 26 points a game.

Subiaco only conceded a remarkable 169 points across 18 games in first quarters through the season while also being by far best defensively in second terms giving up just 199 points. They did give up more in the second halves with 543 in total but were still the best defensive in last terms.

South Fremantle was ranked fourth defensively in first quarters, third in second terms, fifth in third quarters and then third in final periods.

Then with South Fremantle, the Bulldogs won their first quarters by 84 points, second by 108, third by 86 and fourth by 66.

This will be just the third ever Grand Final meeting between the clubs with each of them coming this century. Subiaco won by 83 points back in 2006 and South Fremantle prevailed by 18 points in 2009.