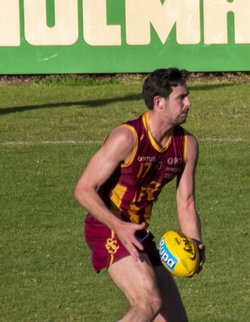 SUBIACO is the first team through to the WAFL Grand Final for 2019 after beating South Fremantle in Sunday's second semi-final thanks to a third quarter burst while Claremont has stayed alive eliminating the West Coast Eagles.

That saw South Fremantle set up a second semi-final clash with minor premiers Subiaco and little separated the two teams most of the afternoon on Sunday at Leederville Oval.

However, Subiaco piled on six goals in the space of 12 minutes in the latter part of the third quarter, with Ben Sokol kicking the first two and Rhys Waters the next four, as the Lions ended up prevailing 14.13 (97) to 10.3 (63).

The win means that Subiaco has qualified for the remarkable achievement of reaching a sixth consecutive WAFL Grand Final. Only once in WAFL history has a team bettered that record and that was East Fremantle who played in nine in-a-row from 1904 to 1912.

The first semi-final took place at Claremont's Revo Fitness Stadium and despite the West Coast Eagles kicking the first two goals of the game, Claremont kicked 10 goals to six from there to win a tight affair 10.6 (66) to 8.12 (60).

Sunday's results mean that Subiaco is through to the WAFL Grand Final on Sunday September 22 at Optus Stadium.

Their opponent will be determined on Sunday in the preliminary final between South Fremantle and Claremont at Fremantle Community Bank Oval.

Meanwhile in the colts, Peel Thunder won straight through to the Grand Final by beating Claremont in the second semi-final 8.15 (63) to 4.5 (29).

Claremont and West Perth will now play this Sunday at Fremantle Community Bank Oval in the preliminary final playing for the right to take on the Thunder in the Grand Final.

It was quite the arm-wrestle if you take out a 12-minute burst in the third quarter, but that's all Subiaco needed to set up a match-winning advantage and ultimately beat South Fremantle in Sunday's second semi-final.

The two teams locked horns with a Grand Final spot on the line at Leederville Oval and they are certainly no strangers to meeting in finals in recent years having played in the second semi-finals of 2016 and 2018, and preliminary final of 2017.

South Fremantle had also handed Subiaco its only loss since the 2017 Grand Final at Leederville Oval in Round 6 this year so all signs were pointing to a tremendous contest.

And that's what it was outside of that 12-minute burst in the third quarter. But in that period, Subiaco piled on six goals in a blistering display of what they are capable of.

Subiaco made a good start with Max Walters kicking the first goal of the second semi-final and the Lions had the first two when Thomas Edwards-Baldwin also kicked truly.

But South Fremantle steadied well in general play and then goals to Jacob Dragovich and Shaun Bewick, after some incredibly hard running, saw scores all tied up by quarter-time.

Harry Marsh turned out to be Subiaco's move forward in the absence of the suspended Ryan Borchet and he kicked the first goal of the third quarter but South Fremantle responded thanks to the left boot of Kade Stewart.

Edwards-Baldwin would add his second but the Bulldogs again answered through Mason Shaw and the Lions were up by just four points at the main break.

It was still just a five-point game by midway through the third quarter but then Subiaco made its move and by three quarter-time, had put the game out of reach of the Bulldogs following a stunning burst.

Having been well held all day by Noah Strom, Bernie Naylor Medallist Ben Sokol kicked two goals in two minutes for the Lions.

Then Rhys Waters caught fire in remarkable fashion to kick four goals over the next nine minutes and suddenly Subiaco had kicked six goals in 12 minutes and a five-point lead had ballooned to 42 by three quarter-time.

Subiaco went up by 48 points to start the last term as well with a third goal to Edwards-Baldwin. South Fremantle got a couple back through Shaw and Chad Pearson but then Sokol kicked a third to steady the Lions.

South Fremantle ended up kicking four of the last six goals including the last three, but all that did was cut the final margin to 34 points with Subiaco winning 14.13 (97) to 10.3 (63).

Subiaco had to juggle around its forward-line a little with Ryan Borchet out suspended and while Ben Sokol had a fascinating battle with Noah Strom, the Bernie Naylor Medallist still kicked three goals from 12 touches and eight marks.

Rhys Waters kicked his four goals in the space of nine minutes in the third quarter while Thomas Edwards-Baldwin made the most of his opportunities kicking three goals too.

With Josh Deluca no longer there, Subiaco needed someone to step up in the midfield too and that man proved to be Ben Newton who was outstanding with 28 possessions, eight inside 50s, four tackles and a goal.

Max Walters continued his outstanding form too with 24 possessions, six tackles, six inside 50s and a goal while captain Leigh Kitchin finished with 23 disposals and 10 tackles, and Kyal Horsley 22 touches, 10 tackles and eight inside 50s.

Greg Clark also had 20 possessions while Justin Joyce was instrumental not only with his 17 disposals and six marks but with his smarts and hardness a standout.

Lachlan Delahunty had 18 possessions, 10 tackles and 28 hit outs in a fascinating ruck battle with Brock Higgins while down back Jordan Lockyer, Drew Rohde, Hayden Kennedy and Heal were particularly effective.

Mason Shaw kicked three goals for South Fremantle from 13 possessions and seven marks in a good battle with Aaron Heal while Kade Stewart also kicked two majors for the Bulldogs.

Haiden Schloithe again worked his tail off for South Fremantle to end the afternoon with 24 possessions and six tackles while captain Dylan Main finished with 21 disposals, six tackles and a goal.

Chad Pearson ended up with 17 possessions and kicked a goal after being thrown forward late while Brock Higgins had a tantalising ruck contest with Lachlan Delahunty, finishing with 16 disposals, four tackles and 51 hit outs.

South Fremantle were once again down a man early in the game with young defender Seaton Thompson hurting a hamstring.

The seasons of Claremont and the West Coast Eagles went on the line when they met in the first semi-final at Claremont's Revo Fitness Stadium on Sunday.

Despite the Tigers finishing in third position on the ladder to earn a finals double chance having won three more games than the Eagles during the home and away season, Claremont did appear to have the job in front of them.

The Eagles came into the game on a four-game winning streak including beating West Perth in the elimination final at HBF Arena the previous Sunday and from that team, they added Liam Duggan, Jack Petruccelle, Jarrod Cameron and Brendon Ah Chee to their side on Sunday.

Claremont was coming off a seven-point defeat in the qualifying final the previous Saturday against South Fremantle as well but the Tigers were determined to try to get to a first preliminary final since 2013.

West Coast then started strongly to kick the first two goals of the game but it was a tight affair the rest of the way with little separating the two teams in a low-scoring, dour affair.

In the end Claremont kicked the last goal of the game from Anthony Treacy to win 10.6 (66) to 8.12 (60) with the Eagles having two chances late but Brady Grey and Brendon Ah Chee could only manage behinds.

The result means that Claremont advance to the preliminary final against South Fremantle at Fremantle Community Bank Oval as they attempt to win through to a first Grand Final since 2012.

Meanwhile, the inaugural WAFL season of the Eagles comes to a close.

The Tigers got good drive out of the back-line with Lachlan Martinis finishing with 24 possessions, Bailey Rogers 17, Haydn Busher 16 and Antony Hamp 16.

West Coast started the first semi-final impressively with the first four scoring shots of the game and kicking two goals from that courtesy of Nick Reid and Bailey Williams as they opened what would prove to be a game-high 14-point advantage.

But by quarter-time, Claremont had drawn level thanks to goals from Anthony Treacy and Alec Waterman.

Claremont then kicked ahead to start the second term with a goal to Lee before Jordan Law stretched the Tigers' advantage to 11 points. However, the Eagles got back in front soon after with Reid booting his second and third goals of the contest.

Then heading into half-time, Oliver Eastland put Claremont back on top briefly before West Coast responded with the last two goals of the half from Brendon Ah Chee and Jack Petruccelle to hold a seven-point advantage at the major break.

Claremont drew back level to start the second half when Kane Mitchell kicked a goal and then the Tigers took the lead courtesy of Lee's second goal.

Bailey Williams goaled for West Coast to make scores level again soon after before Ryan Lim and Oliver Eastland responded for the Tigers and they went up by 11 points, and still led by nine points at three quarter-time.

There would prove only two goals in the last quarter with West Coast kicking the first courtesy of Liam Duggan to pull back within two points.

Scores were level soon after following a couple of Eagles behind but it would be Treacy's goal for Claremont at the 14-minute mark that would ultimately prove the match-winner.