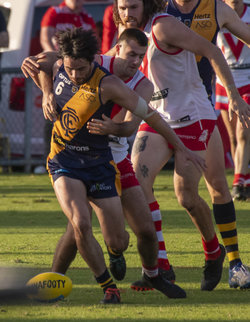 RYAN Lim has set himself for a bounce back game in Sunday's first semi-final against the West Coast Eagles and he remains confident of how far Claremont can still go in 2019 provided they play attacking football.

But when the Tigers threw caution to the wind and started to play more attacking football, the goals began to flow and they ended up only losing by seven points to the Bulldogs.

Now Claremont turns its attention to playing the West Coast Eagles in a cut-throat first semi-final this Sunday at Claremont's Revo Fitness Stadium.

Not only does Lim remain confident that the Tigers can get the job done against the Eagles to advance to the preliminary final to play either Subiaco or South Fremantle, but he sees no reason they can't still go all the way in 2019.

"We've beaten West Coast this year, we've beaten South Fremantle and over the past two years we've come very close to Subiaco, and you know anything can happen in a Grand Final," Lim told 91.3 SportFM.

"There is absolutely no doubt that we believe we can win this competition. The boys have belief and we have a fair bit to play for, and to prove, but the belief in the group is massive and we all really think that this could be our year."

As for last Saturday's qualifying final loss to South Fremantle, Lim felt the key was Claremont needing to play the type of attacking football they did when down almost seven goals from the outset.

He has no doubt that the Tigers have the ability to do that for four quarters and if they do then he has no question they will be tough to beat not only on Sunday against the Eagles, but potentially for the next three weeks.

"When our backs are against the wall and we don’t feel any pressure, and we really go at it, we've proven we can match it with any team when we do that. The challenge isn’t doing that for a short period of time, it's doing it for four quarters which we weren’t able to do on the weekend.

"We don’t have a second chance now so we have to leave everything out there, and go at it like we did. We know we can pile on multiple goals in a short period of time if we do play like that so that will be our mindset this week."

Lim is now an experienced WAFL player with 97 games under his belt and he has established himself as one of the hardest-running players in the competition who can play any number of roles.

He is more than capable of playing as an on-baller but then equally effective out on a wing or even at half-forward or half-back.

That gives coach Darren Harris plenty of options on where he can use the 23-year-old, but no matter where he lines up, Lim is looking forward to making up for what he felt was a disappointing individual performance last Saturday against South Fremantle.

"I wasn’t too happy with how i went, it was probably one of my worst games of the season unfortunately at the most important time," he said.

"I was pretty disappointed with how I went but South's midfield is very good and their wingers do a very good job of clogging up space and preventing us from getting uncontested marks, and moving the ball with our skills and cutting them open through the middle.

"I would have liked to have a greater impact on the team and do more to help us win, but now I'm looking forward to this week and am hoping to have a massive impact against West Coast. If we can have 22 people playing our role I'm sure we'll be able to get the job done."

While Lim certainly acknowledges their strength, he wouldn’t want to be going into battle against them with anyone but his Claremont teammates.

"It's always a good challenge playing against AFL-listed players and as Claremont midfielders, we are pretty confident that our midfield can match it with anyone in the competition," Lim said.

"Playing against AFL-listed is always going to be tough because they have that really good chemistry and they are strong, and know what they are doing.

"But when I walk out onto the field knowing I have guys like Jye Bolton, Kane Mitchell, Dec Mountford and Jared Hardisty walking alongside me, I'm pretty confident my boys will be able to get the job done."