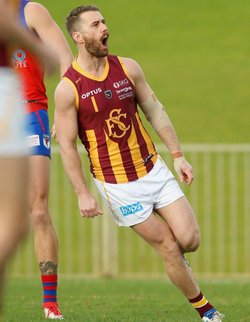 LEIGH Kitchin's first five WAFL seasons with Subiaco could have hardly gone better but now he enters his first finals campaign as captain at the Lions and for the prolific midfielder, it's all about keeping to plan but ensure the hunger doesn’t dissipate.

Kitchin arrived at Subiaco in 2015 from VFL club Frankston as a virtual like for like replacement for the previous year's Grand Final Simpson Medal winner Jason Bristow who moved into retirement – and has since returned as assistant coach.

Not only did Kitchin come in and slot into that midfield role seamlessly from the start of the 2015 season, but he has become an outstanding servant of the Lions over the course of what is now a 104-game WAFL career.

It's remarkable to think that Kitchin has never played a WAFL season where his team hasn’t won the minor premiership and hasn’t reached a Grand Final with the 29-year-old already a dual premiership player from the triumphs of 2015 and 2018.

Kitchin's quality as a tough and prolific midfielder is highlighted by the fact that he's played in the State Game each year he's been playing in the WAFL as well while also winning a fairest and best award along the way – no mean feat considering the teammates he contends with.

Of those 104 games he has played with Subiaco, Kitchin has only played in 11 losses with two of those being Grand Finals and only one in the last past 37 matches. But now he will do something for the first time this Sunday in the second semi-final against South Fremantle at Leederville Oval.

For the first time coming into a finals series, Kitchin is captain at Subiaco having assumed that role from 200-game club great Kyal Horsley in 2019.

For Kitchin, he sees no reason to have a different approach heading into Sunday's game with South Fremantle with a spot in the Grand Final at stake even if he is now captain.

"I'll be excited to play this weekend in what will be a huge challenge for us against a team that is playing great footy and South Freo has been really consistent again," Kitchin told 91.3 SportFM.

"But in terms of doing it as captain, my approach doesn’t really change too much. I've been in a similar position being vice-captain the last few years now so I don’t really put any extra expectations on myself.

The fact that Subiaco is familiar with this position is currently in is something that provides Kitchin and his teammates with a degree of confidence that they know what it takes to succeed, but at the same time they know they can't afford to lose focus and get over confidence.

Just because Subiaco has won the last five minor premierships to earn the break in the first week of the finals ahead of hosting a second semi-final, doesn’t mean they don't have that same burning hunger to achieve more success.

The Grand Final losses of 2016 and 2017 made sure that Subiaco would take nothing for granted no matter how dominant of a team they were during the home and away season, and Kitchin is confident they've got that balance right again entering this finals series.

"I guess it's about getting the balance right between being comfortable but making sure you have that same desperation still that you need in a final. That's the fine balance that you have to have," he said.

"You want to obviously settle your nerves quickly and feel at home, and feel confident in your team and your structures with how you're going to perform.

"But there's always a fine line between comfort and being complacent so we're definitely not getting comfortable. But hopefully having some experience holds us in good stead."

Subiaco had the week off in the first week of the finals awaiting to find out if it would be South Fremantle or Claremont they would play in the second semi-final with a spot in the Grand Final at stake.

Kitchin enjoyed the chance to have the week off from playing in the sense of freshening up and getting their preparation right, but he always missed the chance to play a game at the same time.

Now all his attention is on trying to topple a South Fremantle team that he knows are going to be no pushover on Sunday afternoon.

"It's good from the perspective of having that extra week to rest up and put two weeks into training and focusing on an opposition, and having a real clear idea of who you are going to play," Kitchin said.

"It gives you that extra time to ramp up training over that fortnight period, but we love playing footy so any time you have a bye you know you are missing out on playing a game. So that's the flipside of it as well.

"We went along and watched as a squad with the coaches and playing group, and we saw that they are a really well structured team who moves the ball well which we were impressed by.

"It was a spirited game and we've seen it a lot from them, they've been a good team for a long period of time now.

"Some of their players that might not have been bigger names the past few years have really come on and developed, and are starting to carve out names for themselves now so we were impressed by that as well."