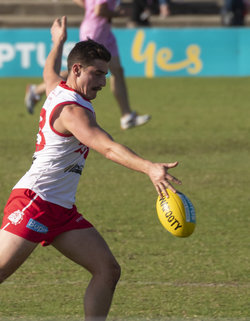 HAVING already tasted colts and reserves premiership success at South Fremantle, Jason Maskos desperately wants to breakthrough at league level with the Bulldogs as he prepares for his 100th game.

Following on from the footsteps of his father Arthur who played 90 games for South Fremantle between 1985 and 1992, and then would go on to coach his son in colts and be a league assistant, Jason always seemed destined to play with the Bulldogs.

He always felt like achievements like reaching 100 games was a faraway dream, but he reaches the century mark this Sunday as South Fremantle take on Subiaco in the second semi-final at Leederville Oval with a spot in the 2019 WAFL Grand Final on the line.

It is rightfully a proud moment for Maskos to reach 100 games on Sunday to book his name on the No. 33 locker, but what his focus is on is trying to get the win for the Bulldogs to reach a Grand Final having been bundled out in three successive preliminary finals.

"It's always been a dream just to get my name on the locker but it does take a bit of a backseat because right now I'm just focusing on trying to get into a Grand Final. Having been so close the last few years, that's all I really want right now," Maskos said.

"We are really excited for Sunday's game. Obviously we had a lot of players leave at the end of last year and at the start of this year we didn’t really know how we'd go.

"But to be in the position we're in now going into a second semi, we would have taken that during pre-season. We're really excited to be in this position and think we can go pretty far."

Subiaco might have lost just one game since the 2017 Grand Final having finished on top of the ladder for a fifth straight year as they try to book in a sixth consecutive Grand Final appearance.

But South Fremantle is that team to have handed them a loss back in Round 6 this year and that was also at Leederville Oval so Maskos sees no reason why they can't do it again.

"It gives us a lot of confidence and we know that we like to play them on big grounds so we can use our run against them," he said.

"So we know we can run them around and use the wide open spaces. We do take a bit of confidence now from that and we just have to put that into practice on Sunday."

Maskos often gets the toughest defensive job at South Fremantle on the opposition's best mid-size or small forward. From Subiaco, that appears to be his former Bulldogs teammate Ben Sokol who is in remarkable form having kicked 29 goals in the last five matches to secure the Bernie Naylor Medal.

"If I end up playing on him, it will be a good challenge. Back in Ben's last year at South, we were both up and down from the league team and neither of us won a game for about the first six rounds of the year," Maskos said.

"But he took his opportunity and went to Subi, he's still a really good bloke, though, and I'd look forward to the challenge of playing on him. He always jokes around that he's going to put a knee in my back but it's all good fun."

Having won a colts premiership in 2011 and then playing in reserves flags in 2013 and 2015, Maskos desperately wants to be part of South Fremantle first league triumph since 2009 now.

He sees no reason why that shouldn’t be their aim over the next three weeks.

"It would be massive if we can breakthrough especially to do it with this group of blokes that I've come up through juniors and colts with like Haiden Schloithe, Steve Verrier, Mason Shaw and there's probably more that I'm missing out on," he said.

"It would just be a massive thing just because we are such close mates. It would mean everything to win it with him. I've won a couple in the reserves and a colts one, and there's no better feeling at the end of the year to come away with a premiership. It would just be awesome if we can do it."

While team success is where his focus lies right now, Maskos is rightfully proud of what he's been able to put together over his career cementing himself as one of the best defenders in the competition.

He might have given up his No. 33 for a season for Kyle Hams back in 2015, but now couldn’t be prouder to join him on the locker as 100-game players.

"It's pretty special to get to 100 games. I'll be able to come back to the club in years to come and look at that locker and show other people what I was able to achieve. It's pretty massive and the only other person on the locker is Kyle Hams," Maskos said.

"And when he came back to the club, I wore No. 29 because I gave him back 33 to wear but when he retired, I went back to it. When I first got given it, I didn’t think much of it but to stick with it is something I'm pretty happy with and now it's just going to be me and Kyle that have their names on there."

In terms of playing his role that he's made his own as such an outstanding defensive stopper, Maskos is more than happy in his position in the team but it wasn’t something he started doing until his second year in the colts.

"I know I'm not the most skilful bloke and my role for the team isn’t to rack up a heap of disposals, it's just to nullify someone," he said.

"I'll do my job of taking deeper forwards and letting some of the younger or more attacking boys up the ground do some things. My job is to try and stop my man which means I'm doing my bit for the team.

"All through the juniors and in my first year at colts, I was playing as a half-forward or in the midfield. Then I played one game in my first year of colts down back and then in the second year I started there and haven’t looked back since. I had never really played down there in my juniors but it has seemed to come naturally to me since then."

"We've gelled really well and having Noah come up, who had played quite a lot of footy by the time he got his league chance when he came out of nowhere and hasn’t looked back since," he said.

"Chaddy looks like someone who if he doesn’t get picked up at the end of the year could easily be a 150, 200-game player for the club, he is just such a good player already.

"Then we have the likes of Seaton Thompson coming up now and he's starting to play his role for the team. Then you have guys like Wilson and Subes and we're a pretty tight-knit group there and we just work for each other, and enjoy playing alongside one another."

The South Fremantle blood runs deep in the Maskos family and while he didn’t quite see his dad Arthur play, he sure heard plenty about his history as a player with the Bulldogs growing up.

While he will now playfully remind him he's reached 100 games when his dad didn’t, he's proud that the Maskos name continues to be so closely associated with South Fremantle.

"I always grew up knowing that dad played at South but it wasn’t until I got a big opportunity to play in the development squads that I thought too much about playing for the club," Maskos said.

"But from there, it was still a long road to get to where I am now and from the development squads, there's probably only a handful of blokes who I still play with. Most blokes don't stick with footy, but with the family connection the club's been a big part of our lives obviously.

"Dad has probably been one of my toughest critics especially when he was coaching, but he's a great support too.

"To be honest it was just a dream to think I could play 100 games for the club, but it's pretty awesome to now do it and get my name on the locker. I can always hang it on him that I played a few more games than him too so I'll always be reminding him of that."

Maskos has now followed his dad's footsteps with moustache too and he plans on keeping it that way.

"I couldn’t grow a mo for so long and then it finally came through and now I'm just too scared to get rid of it because I don’t know what I'd look like," he said.

"He always tells me to be careful of it blowing away in the wind."