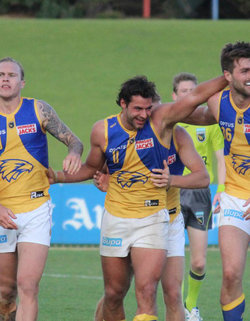 WHEN putting together a WAFL team, the West Coast Eagles wanted the experience and leadership of Brady Grey and he continues to pay that off in spades while knowing helping lead team success could help him back into the AFL.

It was somewhat a surprise when Grey found himself delisted by the Fremantle Dockers at the end of 2018 having played 21 AFL matches in the previous four years.

He had certainly shown along the way he belonged in the AFL, particularly during 2017, and when back in the WAFL with Peel Thunder he produced some outstanding performances.

But he wasn’t able to be part of the premierships for the Thunder in 2016 and 2017, and it's that success at WAFL level that he's now craving both to reward the players who have worked hard for the chance, and to also help in his quest to return to the AFL system.

At 24 years of age, there's every chance Grey is still to even reach his peak despite being renowned for his hardness and toughness, and his ever-improving ability to also win the football and his improved use of it.

That was on display last Sunday in the elimination final for the Eagles against West Perth at Joondalup's HBF Arena.

Despite having led most of the day, West Coast found themselves behind with time running out but then it came down to Grey to seal the deal.

After some good ball movement from a kick-in, Bailey Williams marked strongly at half-forward and then found Grey in space on the other side of the ground running into the forward 50.

With the result likely relying on his kick, Grey showed all the poise and skill in the world to slot the goal from 40m out despite the tricky weather conditions to prove the hero and win the game for the Eagles.

"I think I was just at the right place at the right time. We had a lot of things go right from the kick-in and Bailey Williams won a two-on-one and marked the ball one-handed," Grey told 91.3 SportFM.

"He was lucky enough to see me on the far side and I was good enough to finish the work. Obviously after that we still had 30 seconds to hold on and Drew Petrie won a couple of big contests. The fact that we held on was a great result and now we move on to another week."

Following that match-winning goal for Grey, the Eagles advanced to this Sunday's first semi-final against Claremont at Claremont's Revo Fitness Stadium.

It's another cut-throat final for the Eagles to be part of, but they are in their best patch of form for the season and a win will see them advance to a preliminary final to take on the loser of the second semi-final between Subiaco and South Fremantle.

Having missed out on those 2016 and 2017 premierships at Peel Thunder, Grey is desperate to help lead West Coast to what would be a historic result in their first season as a standalone club.

And when he reflects, Grey knows that a big part of him being signed by the Eagles to play with their WAFL team was to help provide that leadership and hardness. He's done that aplenty but he hasn’t forgotten on his own dream of a second crack in the AFL.

He is realistic to know that he doesn’t need to go and try to do something that he's not made for. If he leads the team strongly, attacks the ball and contest hard, and can also win enough of the football to be damaging, then he's showing potential AFL clubs enough that he deserves a chance.

Then on top of that, if can help lead West Coast to team success then that would be the icing on the cake.

"After whatever happened at the end of last year when I got delisted from Freo, there's still that desire to play at the highest level I can. At the moment it's WAFL but I still have aspirations to play AFL," he said.

"There were clearly things that I had to work by getting delisted, but I've gone back and had a change of perspective to focus on what you try to do game day rather than worrying about things I can't control.

"Meeting with West Coast at the end of last year, I focused on the things I brought to a team and that's meant a change of focus for me personally to underway what my role is with this West Coast WAFL team.

"That includes leadership, hardness and making sure that the actions that I bring provide inspiration and I have to try and make sure every single player out there is playing their role. That's been a good change in perspective where I worry less about my form and more about us winning games of footy.

"I feel like I still have a lot to offer at AFL level and if that's at West Coast then great, but if I have to move elsewhere I'm happy to do that. At the end of the day, if I play good enough someone will take that chance.

"I would think if we can win a premiership and I play a good role in that, then it could go the right way for me."

What the Eagles discovered early in the season with their WAFL team was that while they had talent and it was a bonus to have control of their own squad completely and with how they play, was that it was important to have some veteran leadership.

Grey was helping to provide that through the midfield but it was becoming obviously the back-line needed a senior head and that's where Drew Petrie came in to start playing.

He might have played the second half of his AFL career as a key forward pinch-hit ruckman, but he was a standout centre half-back early in his North Melbourne career so it's a role he has been able to fit back in with.

Having someone with that 332 games of AFL experience down back is something that Grey believes has been crucial in the improved performances since he came into the team from the Eagles, particularly defensively.

"He came in halfway through the year and no offence to anyone, but we probably had that lack of presence and leadership in the back-line of having that stable leader back there," Grey said.

"Not saying the guys there weren’t doing it, but a lot of them were young and playing AFL footy so we had an inconsistent back-line. But to bring in Drew as a 36-year-old who had played 350 senior games of footy, he just brings that presence and opposition forwards worry about him.

"He really sets us up with his leadership and he's been great for Harry Edwards, Josh Rotham and guys like that.

"They are looking at a guy who has played 350 games and learning things on the spot that you can't get from him being in the coaches' box. We have that ability now that he's playing for those guys to learn on the spot, get feedback and improve their footy."