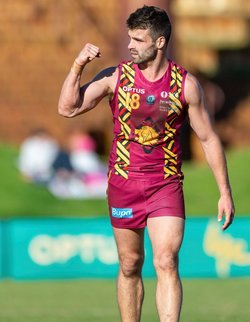 SUBIACO opened Round 17 in the WAFL with a thumping win over Perth to all but secure the minor premiership before the next three teams on the table Claremont, South Fremantle and West Perth also prevailed while Swan Districts broke its losing run.

The Lions once again proved too strong beating the Demons for a seventh consecutive time to all but lock away a fifth straight minor premiership with the 15.10 (100) to 6.6 (42) victory.

Claremont then prevailed in a thriller against Peel Thunder at David Grays Arena in Mandurah to retain second position on the ladder, with the Tigers ended up winning 13.7 (85) to 11.17 (83).

South Fremantle so remained in third position courtesy of a 15.16 (106) to 11.7 (73) win against East Perth at Leederville Oval on the back of an eight-goal to nil third quarter.

West Perth leapfrogged Perth into fourth position on the ladder as well on Saturday afternoon overcoming a slow start to end up beating East Fremantle 14.12 (96) to 10.14 (74) at HBF Arena.

Swan Districts snapped its seven-game losing run on home turf at Steel Blue Oval with a 12.8 (80) to 12.4 (76) victory against the West Coast Eagles as well on Saturday.

PLAYER OF THE ROUND – BEN SOKOL
There was really only one choice for Player of the Week in Round 17 of the 2019 Optus WAFL Premiership Season and that was Subiaco's Ben Sokol who kicked seven goals in a dominant display against Perth on Thursday night.

Sokol's performance was the best individual haul of goals this season as he became the first person to kick seven goals in the WAFL in 2019 as he moved to 33 goals for the campaign as he continues to be one of Subiaco's more under valued recruits in recent years.

Coming through the junior and then colts ranks at South Fremantle, Sokol was always seen as one of the best emerging forward talents in the state.

He would then graduate to play some good reserves football at the Bulldogs in 2014 and 2015, including kicking 39 goals in 2015 but for whatever reason he could never cement a spot at league level playing just 11 games across the 2014 and 2015 seasons, including just two in 2015.

Given he hadn’t quite shown what he was fully capable of at league level yet, it wasn’t a high-profile signing by Subiaco when they recruited him ahead of the 2016 season but it has turned out to be an inspired signing by the Lions.

But by 2017 and forming a tremendous partnership alongside excitement machine Liam Ryan, Sokol was able to really unleash his potential with Subiaco and would go on to kick 49 goals in 21 matches including kicking bags of six and five, both against West Perth.

This time Sokol would hold his place for the Grand Final defeat to Peel and he kicked four goals in an impressive performance on the big stage despite the disappointing team result.

He backed that up with another tremendous 2018 season where he kicked 43 goals in 20 matches and became a premiership player and was right in the hunt for the Simpson Medal having kicked five goals from 19 possessions and 12 marks.

Then on Thursday night in the big win over Perth for Subiaco at Mineral Resources Park, he equalled his career-best of seven goals to go with 21 possessions and 13 marks.

He has subsequently been invited to the AFL State Draft Combine in October and it wouldn’t surprise to see the 23-year-old earn a chance at the next level given his overhead marking ability, love of kicking goals and the fact that he's kicked nine goals in his two Grand Finals and four in a State Game.

UNLUCKY BUNCH
There were plenty of players who delivered tremendous performances across Round 17 but couldn’t quite fit into the Team of the Round, including: