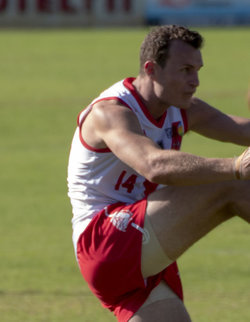 ZAC Strom has turned  himself into one of the best and most versatile big men in the WAFL but as he reflects he had little choice when he was growing up in Exmouth as he now celebrates his 100th game with South Fremantle on Saturday.

Now as Strom prepares for his 100th game in the WAFL, he is doing so while at the peak of his powers as a league footballer.

His early days were spent as a key defender with the Bulldogs and he proved himself a tremendous lockdown player in that role.

But with his tank that allows him to run all day and ability to lead strongly and take good marks, there was a feeling he could perhaps offer more up the ground and he's now settled in that role as a hard-leading centre half-forward and a more than capable ruckman when required.

Ironically allowing him to settle into that role permanently over the past 18 months has been Noah's ability to hold down the full-back position with such aplomb when he only got the opportunity in Round 1 of last year when Zac was unavailable to play.

Now that he reflects, Strom has no doubt that those Friday night matches in Exmouth where he had to cover so much territory playing in the middle held him good stead to now turn into such a versatile player now where he is capable of doing well in whatever role is asked of him.

"When I was a kid we'd only have two teams and we might have only 14 players aside so you would want to be closer to the ball given the size of the oval we played on," Strom said.

"Dave Dowding was our coach and he used to play me and Noah in the rucks so we'd swap in those positions but you got to play against the same people pretty much every week and you'd cover so much ground so you'd just stay between the arcs.

"So in terms of that, I suppose it led to having a pretty good tank and being able to run a bit longer and we used to play Friday night under lights so it was a pretty fun time for us in our younger days.

"Then I went to Geraldton for my last two years of school and I played in a colts premiership under Murray Gardiner. I have a lot to thank Murray for with the support he gave me in that time and he was a great coach as well and all my younger coaches and stuff like that did a great job of making things fun and let me enjoy my football growing up.

"But position-wise, I mostly played in the middle and then as you get taller you get rolled into the key positions but I've always liked taking marks and I enjoy what I'm doing now especially. But I would play any role for the team that I'm asked whether it's forward, back or ruck, just anywhere that Todd that will let me play then I'll always give it my best effort."

Now that he can looking forward to his 100-game milestone this Saturday at Leederville Oval, it's a rightfully proud moment for Strom and he is especially excited to see his name join Cliff Collard on the No. 14 locker at Fremantle Community Bank Oval.

"Someone mentioned the other day that it means I get my name on the locker which is incredibly important to be up with the other names from the club to have done that even though obviously I'm nowhere near as good as them. But it represents how much effort you've put in for the club and how much it means to you so that's pretty special," Strom said.

"It's funny because I used to wear No. 43 and that was Marty Atkins and I always knew I was never going to reach his 266 games but I think Cliffy Collard is the one who stands out to me on the No. 14. He is obviously a great of the club so to have my name under his will be pretty special given how great of a player he was."

Any significant milestone provides the opportunity for some reflection on the journey to get to this point for a player as well and for Strom, he's especially thankful to all of his junior coaches and now to Paul Hasleby and Todd Curley as his two coaches at league level with South Fremantle.

"Sometimes it's a bit of a blur thinking back to some of those early games and I can't really remember too much about them, but I do remember the first game I played," he said.

"That was a loss but I was very thankful to Paul Hasleby who was my first coach at league level for giving me the opportunity to play in the first place. For him to have the confidence in me was very special and I'm very thankful to him and the rest of the coaches who were around at the same time.

"The rest of your teammates then make the game so much better to play and I think I came in during 2013 and played the one game that year, but it was a really talented side to join and I felt really lucky to play with some of the players that I have and that I'm playing with now as well."

Given the South Fremantle forward-line no longer consists of the likes of Ben Saunders, Cory Dell'Olio or Matthew Parker in 2019, extra responsibility has fallen on the shoulders of Mason Shaw and Zac Strom.

The pair are developing a tremendous chemistry working together and Strom only feels like that will continue the more time they get to work on it together.

"It's obviously disappointing the sort of talented players that we have from last year but we feel like we have the depth to cover it with the young blokes coming through and hopefully we're showing that this year," he said.

"To be able to play up forward with Mason, he's an amazing player and we are still growing together. It really helps when the midfielders are playing well and the backs are playing well so we can just get on the end of their hard work really as forwards."

South Fremantle has a long history of brothers playing together and that continues to this day not only with Zac and Noah Strom at league level, but also with Brendan and Steve Verrier and that only scratches the surface of the Bulldogs' brothers who have shared such great memories together.

Now this Saturday afternoon when South Fremantle runs onto Leederville Oval to take on East Perth, Zac Strom will be doing so for the 100th time to book his name on the No. 14 locker and he will have his younger brother alongside him to celebrate the occasion.

Whether it was back on the Friday nights in Exmouth where the pair would dominate in the ruck for their respective teams or coming through at South Fremantle together with both banging down the door to now become regular league players, it's been quite the journey for the Strom bothers.

Now for Zac to celebrate his 100th game this Saturday and to have his brother out there with him means the world to him.

"It is special always to have brothers playing in the same team and I guess the best thing is it makes it easier for our family and friends to come watch us play too," Strom said.

"There are heaps of different brother stories and we have a few of them here at the club as well so it just makes it a bit more special each game that we get to play together.

"I'm sure it's something that we will look back on even more fondly as we get older. He's living with me as well so I get to see plenty of him that's for sure at the moment."

The brothers aren’t the only Strom children currently enjoying football success either with younger sister Mim currently playing in the WAFLW competition with Swan Districts and having just been named to the All-Australian team while looking to have a definite AFLW future.

Zac couldn’t be prouder of his younger sister.

"We are really proud of Mim and the way she is going. She has just made the All-Australian team and has just been invited to the draft," he said.

While the three Strom children continue to thrive on the football field, Zac knows fully well none of it would be possible without the support of their parents.

"I have to give a big thanks to mum and dad for all of their hard work through my sporting endeavours," Strom said.

"Whether it was from driving me around all the time to my games and training, their coaching they have provided or the help and support they've provided me with life in general, I just can't thank them enough."

Strom has been an important part of the South Fremantle teams that have reached the past three preliminary finals in the WAFL but not quite got over that hump to reach the Grand Final. While he knows nothing is guaranteed, he hopes they get another crack at it in 2019.

"It's been pretty disappointing the way the finals have gone the last three years and we understand more than anybody that Grand Finals are not handed to you," Strom said.

"You have to work hard every single game and those experiences remind you that anyone can win on the day no matter how good you've been all season.

"We just have to give it everything every single game and we have to make the finals first, and then we can think about it from there. But we just have to come out with the right intensity and mindset which will help us every week going forward."