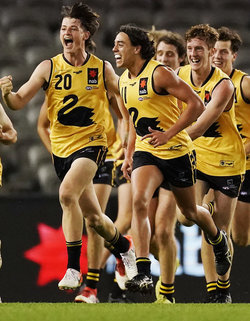 WA claimed the Championships with a thrilling 7.9 (51) to 6.10 (46) win against Victoria Country at Marvel Stadium in the final game of the event.

WAFC CEO Gavin Taylor congratulated all of the State Academy players, coaches and support staff on their successful Championships campaign and paid tribute to the work of WAFL clubs, Colts Coaches, Talent Managers and everyone else involved in the WA Talent Pathway.

“The National Championships are a great way to showcase our most talented players and I thank everyone who has played a role in their development, from their junior coach to all of our staff in the talent pathway,” Mr Taylor said.

“The increased investment in WA’s Talent Pathway from the AFL coupled with the excellent support of our WAFL Clubs, Colts Coaches, Talent Managers and State Academy staff is all evident in the quality of this Championships performance.”

“All of the players have bought into the standards, training requirements and game day structures under the leadership of Head Coach Peter Sumich and State Talent Manager Adam Jones, which has allowed them to perform well as a team whilst also showcasing their natural talents.”

“We are focused on using this momentum to further enhance the growth and quality of WA’s Talent Pathway as we continue striving to be Australia’s best State for talent development.”

WA U18s coach Peter Sumich congratulated all of the players, coaches and support staff involved in the State Academy program on their efforts and achievement.

“This is a great result for everyone as a collective, not just the 23 players who ran out today but all of the players who were part of the squad and played their role during the Championships,” he said.

“I’m really proud of all the players and also want to thank our support staff and coaches. The players were blessed to have such quality people around them to help them get the best result on the footy field.”

“Assistant coaches Craig Otto, Ash McGrath, Mark Seaby, Jacob Brennan and Garry Moss were great and hopefully Jacob and Garry as Colts coaches, can take some of this experience back to their Colts teams."