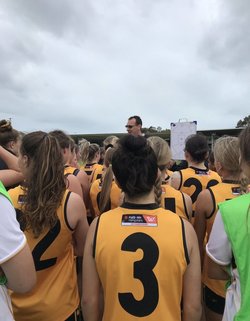 The AFLW WA State U18s preparations for the AFLW National Carnival have continued over the weekend with a thrilling one-point loss to a WAFLW All-Stars line-up in an exhibition game at New Choice Homes Park.

The WA 18s begin their campaign against Queensland this weekend and will go in full of confidence after a strong performance against a handful of AFLW players.

WA began the game in terrific fashion kicking their first goal inside the opening minute, before piling on two more to lead at the first break.

Despite the strong breeze, WA held the All-Stars side to two goals in the second quarter, keeping their advantage to four goals at the main interval.

Led by Courtney Guard and Claire Ortlep the All-Stars slowly worked their way back into the contest, kicking two goals in the third.

Two late goals in the last quarter saw the WAFLW side gain a one-point lead, with the experienced team holding on to record a victory.

Mikayla Hyde was impressive throughout the game for the AFLW WA 18s kicking two goals, while ruck-forward Mim Strom dominated the aerial battle.

Roxanne Roux had a presence up forward, with Sarah Verrier also showing her class in the tight loss.