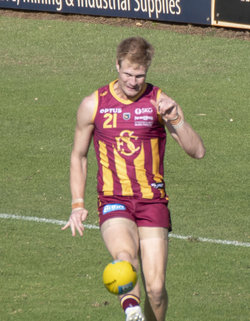 COMING off the WA Day Round in the WAFL, Round 9 features just the three games across this weekend but that doesn’t mean there isn’t plenty to look forward to including Saturday's hotly anticipated match up between Subiaco and Perth.

Perth has been the story of the 2019 WAFL season to date with the Demons' having endured a horrid recent history that now looks like it's coming to an end.

Perth hasn’t won a WAFL premiership since 1977, not played in a Grand Final since 1978 and not reached a single finals series since 1997. That's why when the Demons won five straight matches to open the 2019 season there was so much excitement around them.

Now they get the chance to challenge the might of Subiaco this Saturday afternoon at Leederville Oval.

Subiaco still sits on top of the WAFL ladder despite having lost its first match in two years back in Round 6 at the hands of South Fremantle. The Lions have responded well to beat Claremont and Peel Thunder since.

Now with Subiaco sitting on top and Perth in third spot, and with the Demons trying to make a statement against the league's powerhouse, there's plenty of fascination surrounding Saturday's standalone fixture at Leederville Oval.

The game will be broadcast on Channel 7 as well from 2pm and it has all the makings of the WAFL game of the season to date.

The other Round 9 WAFL action takes place on Sunday afternoon with West Perth hosting the West Coast Eagles at Joondalup's HBF Arena and East Perth taking on East Fremantle at Leederville Oval.

Claremont, Peel Thunder, South Fremantle and Swan Districts all have the bye. Interestingly the Bulldogs are the only team who played on Monday who has the bye while the Sharks, Royals and Falcons all have to back up from WA Day.

TABTOUCH TEAM OF ROUND 8
OPTUS WAFL ROUND 8 WRAP

Round 9 in the WAFL gets underway with the standalone Saturday clash and it shapes as a beauty with Subiaco hosting Perth at Leederville Oval.

Given Subiaco has been the dominant force in the WAFL for a long time now and Perth has been perennial strugglers, it's no surprise that the Lions have built an impressive record against the Demons.

Subiaco has won its past five matches against Perth with the Demons last win against the Lions coming in Round 16, 2016 at Lathlain Park.

Prior to that, Subiaco had won eight in-a-row against Perth so the Lions have won 13 of their past 14 recent clashes.

There has been only one instance this century of Perth scoring consecutive wins against Subiaco which was when they won four straight between Round 6, 2012 and Round 17, 2013.

But overall since Perth last played finals in 1997, Subiaco has won 42 of the 53 games between the two teams.

Subiaco has been the standout WAFL team in that period as well, but Perth looks to have turned the corner this season and now a strong showing against Lions on Saturday would send another significant message.

Subiaco comes into the game still on top of the ladder with a 7-1 record having now bounced back from their first loss since the 2017 Grand Final at the hands of South Fremantle with wins against Claremont and Peel Thunder.

Perth opened the season with five straight wins and then following successive losses to West Perth and East Fremantle, bounce back last week to beat Swan Districts to enter the clash with Subiaco with a 6-2 record.

Subiaco had a solid win over Peel in Mandurah last Sunday and from that team, Travis Cleggett, Jack Beverley and Jacob Miller have been added to the squad.

Perth beat Swan Districts last Saturday and from that side, Brant College, Mitch Henderson and Lachlan Dennis come into the squad.

There are then two matches in Round 9 to be played on Sunday afternoon starting at Joondalup's HBF Arena with West Perth hosting the West Coast Eagles.

Both teams need a win too to stay in touch for a finals berth with West Perth entering the game with a 3-5 record in sixth position following Monday's WA Day Derby defeat to East Perth on the back of a run of three successive wins having started the season losing four straight.

The Eagles, meanwhile, have now lost four games in-a-row to sit with a 2-6 record and have struggled to be competitive at times in recent losses to Claremont, Swan Districts, East Perth and South Fremantle.

Finishing in front of goal could be a big factor in the result with West Perth the most accurate kicking team so far in 2019, going at 67 per cent on shots at goal not including rushed behinds or 60 per cent including them.

Meanwhile, West Coast the least accurate team in the competition going at just 50 per cent without rushed behinds and 43 per cent when they are factored in. From not rushed behind scoring efforts, West Perth has kicked 84.42 for the season and West Coast 67.67.

Both teams have been slow starters throughout the season to date too with West Perth second last for first quarters and West Coast third last.

The Falcons then in turn are the third best final quarter team in the WAFL while the Eagles are still ranked worst in second quarters, sixth in third terms and second last in final periods.

From the West Perth team that lost on Monday to East Perth, potential debutant Tom O'Donnell comes into the squad for the Falcons along with Brayden Antonio, Alec Johnson, Conal Lynch, Tyson Moulton and Connor West.

And as for West Coast from the team that lost to Claremont last Sunday at Optus Stadium, Hamish Brayshaw, Brayden Ainsworth, Francis Watson, Daniel Acres, Zac Cary, Chaz Flint, Joel Kalajzic and Sam Lamont have all been added to the squad.

Josh Rotham is the only confirmed out at this stage earning an AFL call up with the Eagles after a strong defensive performance last week against Claremont.

The last game of the round then takes place on Sunday afternoon as well at Leederville Oval with East Perth hosting East Fremantle.

Both teams played in their respective WA Day Derbies on Monday with East Perth beating West Perth while East Fremantle started impressively but faded away to be overrun by South Fremantle.

The win for the Royals improved them to a 3-5 record on the season to be knocking on the door of the top five while the Sharks are now 2-6 in last place but still in touch with the final five still especially if they can score a victory on Sunday.

East Fremantle are the worst offensive team (59.5 points a game) in the competition and worst defensive side (91.0 points) but those numbers are on the improve in recent weeks while East Perth are only scoring 62.0 points themselves and conceding 84.8.

East Perth played well to beat West Perth on Monday and from that team, former Claremont big man Eddie Simpson could make his Royals debut with Christian Ameduri, Julian Ameduri, Nathan Eaton and Matthew Johnson all added to the squad.

From the side that lost the WA Day Foundation Derby to South Fremantle, James Harrold, Josef Hebiton, Max Murphy and Jack Perham have been added to the squad.