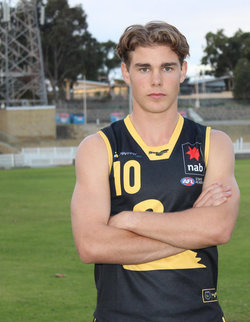 Perth’s Deven Robertson has been appointed captain of the Simply Energy WA U18s squad ahead of the state’s first game against Vic Metro this weekend.
The talented midfielder will be joined in the leadership group by five other Sandgropers throughout the 2019 Championships.

“Obviously there’s been some really great players come through and wear the Black Swan or the Gold Swan, so to be named captain is something I’m really proud of,” Robertson said.

He will be aided by fellow Sandgropers Riley Garcia, Liam Henry, Nathan O’Driscoll, Jarvis Pina and Trent Rivers who have all been named in the leadership group.

Robertson doesn’t need to look very far to find a mentor for his leadership. The talented youngster is the nephew of former West Coast Captain Darren Glass.

“He’s been huge for me. Not only was he a legend footy-wise, obviously captain of the Eagles, but he’s the most family-centred guy you will ever meet. He’s so selfless and I try and be like him, not only as a leader but as a family-man as well,” Robertson said.

Robertson credits his Uncle for helping him have a big pre-season which resulted in excellent performances in the two-kilometre time trial, and reduced skinfolds.

“He came back over the summer. I did a lot of my pre-season training with him, so most mornings we would go and do a running session and then we’d do skills after. That was big for me,” Robertson said.

Robertson was fortunate enough to have caught up with former West Coast co-captain and Brownlow Medallist, Matt Priddis, who gave him helpful guidance.

“He [Priddis] said if you’re lucky enough to be selected as captain, there’s a reason you’ve been selected as captain and he said to try not to change too much. He said you’ve gone into that position for a reason, so you don’t really have to go out of your way to do anything special, just keep doing what you’re doing and it’ll work out,” Robertson said.

Robertson has had experience captaining his state before, successfully leading the Western Australia to glory in the 2017 NAB AFL U16s Championships.

“That was amazing. Obviously we won the Championships which was incredible. I think our biggest winning margin was four points against South Australia which was the first game. Then the next two were by one point. So being a part of that team was in itself awesome. Fortunate enough being captain as well added that little bit extra to it,” he said.

It was in 2017 that Robertson started to make a name for himself as one of WA’s leading draft prospects after winning the WA U16s MVP.

“To be MVP in a championship-winning team is pretty special because you know you’ve had a part to play in that team and you played your role and did what was expected of you.”
Western Australia start their campaign against a formidable Vic Metro at Lathlain Park on Saturday morning, and Robertson is looking forward to the contest.

“I think it’s going to be a bit wet. The forecast is pretty rainy, so I think it’ll be a real tight contest. There will be a lot of work done at the coalface which hopefully I can get in and under and get the ball going forward,” he said.

What is evident is that Robertson is a natural leader who has the potential to lead WA to glory in 2019.

OTHER MEMBERS OF THE WA STATE U18s LEADERSHIP GROUP

LIAM HENRY – CLAREMONT
A member of Fremantle’s Next-Generation Academy, Henry is a quick and skilful wingman, similar to Fremantle’s Brad Hill. Like Hill, Henry reads the play exceptionally well to find himself in the right positions, is always balanced with ball in hand, boasts explosive evasive skills, and is seen as professional, and dedicated – making him a respected leader amongst his peers. In three games for the Tigers, Henry is averaging 22 possessions, five marks, five tackles and has kicked five goals.

TRENT RIVERS – EAST FREMANTLE
The East Fremantle Captain is considered to be a potential top-25 draft pick, such is his consistency, leadership qualities, skill-level and physicality. In four games for the Sharks, Rivers is currently averaging 27 possessions, six marks and five tackles. Rivers has mostly played half-back for the Sharks, but has demonstrated an ability to push into the midfield, where he uses his big frame to rip the ball out of stoppages and feed it to the outside runners.

JARVIS PINA – PEEL THUNDER
The Peel Thunder Captain is a small defender who locks down his direct opponent, but also has the smarts to provide offence from the defensive half. In three games for Peel, Pina has lead the Thunder to victory over in all the games and is currently averaging 22 possessions, seven tackles and five marks. Due to his playmaking ability, penetrating skills, calm composure and excellent understanding of the game, Pina can be likened to Melbourne’s rising star Christian Salem.

RILEY GARCIA – SWAN DISTRICTS
A member of the 2017 WA State U16s Academy’s leadership group, Garcia has gone from strength to strength in the following years. In 2018, he finished ninth in the Jack Clarke Medal and sixth in Swan Districts’ Best & Fairest, after averaging 24 possessions, four tackles and three marks across 12 games. He started this year with Swans’ League team and showed serious potential, averaging 12 possessions, two tackles and two inside 50s, playing primarily as a half-forward flanker.